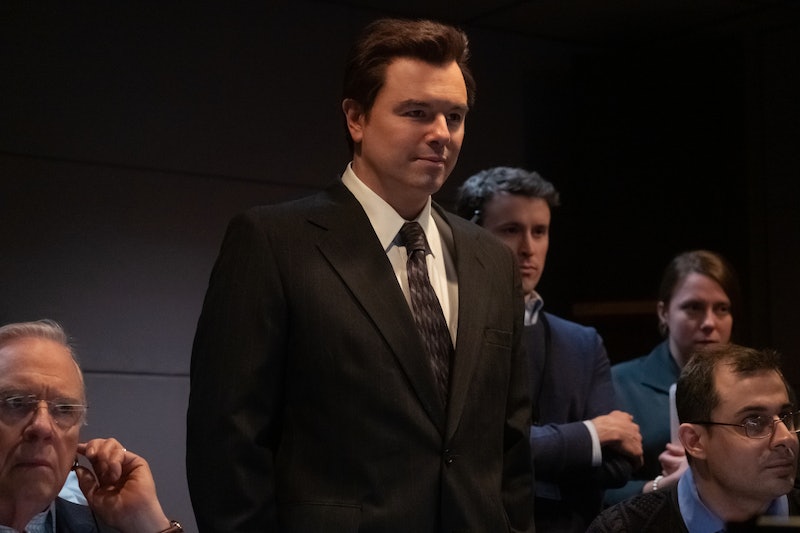 The Loudest Voice on Showtime gives the history of how the Roger Ailes-run Fox News influenced politics to where we are today. And while you may recognize some of the on-air Fox News correspondents who are being portrayed, like Sean Hannity, you probably don't recognize Seth MacFarlane's The Loudest Voice character Brian Lewis. Even if you do recognize the Family Guy creator's mug.

The first episode showed that Ailes brought Lewis with him to Fox from CNBC before it became MSNBC. But, as the second episode hinted at, Lewis wouldn't always be in full agreement with his boss. MacFarlane is best-known for his comedy, but The Orville star is known to get political — as his Twitter highlights. The Democrat even tweeted in 2018 that Fox News made him "embarrassed" to work for Fox since his TV shows have all aired on the channel. So his casting as an influential Fox News employee is particularly interesting on the Russell Crowe-led show.

There's also the fact that the second episode of The Loudest Voice, "2001," focused on the Sept. 11 attacks and MacFarlane was supposed to have been on one of the airplanes that flew into the Twin Towers.

While MacFarlane might not have been the most obvious choice to play Lewis, the funnyman's political views, life experience, and subversive comedy are in some ways quite fitting for the role. Especially based on what eventually happens in Lewis' career. In 2013, when Lewis was the executive vice president of corporate communications, he was fired from Fox News. The Hollywood Reporter noted that Lewis had been a close advisor to Ailes, but a spokesperson for Fox said, "After an extensive internal investigation of Brian Lewis' conduct by Fox News, it was determined that he should be terminated for cause, specifically for issues relating to financial irregularities, as well as for multiple, material and significant breaches of his employment contract."

Yet, Gawker reported months later that a Fox News executive claimed that the "financial irregularities" had been made up to explain Lewis' forced exit. "That whole financial impropriety thing was complete bullsh*t," the unnamed executive told Gawker. Instead, the source said that Lewis was fired due to speaking with Gabriel Sherman — the author of The Loudest Voice in the Room: How the Brilliant, Bombastic Roger Ailes Built Fox News — and Divided a Country. Sherman's book just so happens to be the source material for the Showtime miniseries.

The New York Times reported that an anonymous source had revealed Lewis made a deal with Fox News to be paid a "sizable sum" to not reveal any information about the organization. (Gawker wrote that the total was allegedly $8 million.) And in 2014, The Loudest Voice author Sherman tweeted out a Gawker article that reported how Fox had retracted its fraud statement about Lewis.

Without official accounts, most of this information is hearsay. But based on how Lewis' career with Fox News ended, having someone who disdains the channel playing him isn't so off-base. And you can watch Lewis' relationship with Ailes deteriorate thanks to MacFarlane's interpretation in The Loudest Voice.

More like this
Everything To Know About The Flash Season 9
By Brad Witter
Who Is 'Stranger Things 4' Fan-Favorite Joseph Quinn Dating IRL?
By Grace Wehniainen
Here's Why You'll See Less Of Olivia Rodrigo In 'HSMTMTS' Season 3
By Bustle Editors
Sadie Sink Would Escape Vecna From 'Stranger Things' With This Taylor Swift Song
By Grace Wehniainen
Get Even More From Bustle — Sign Up For The Newsletter