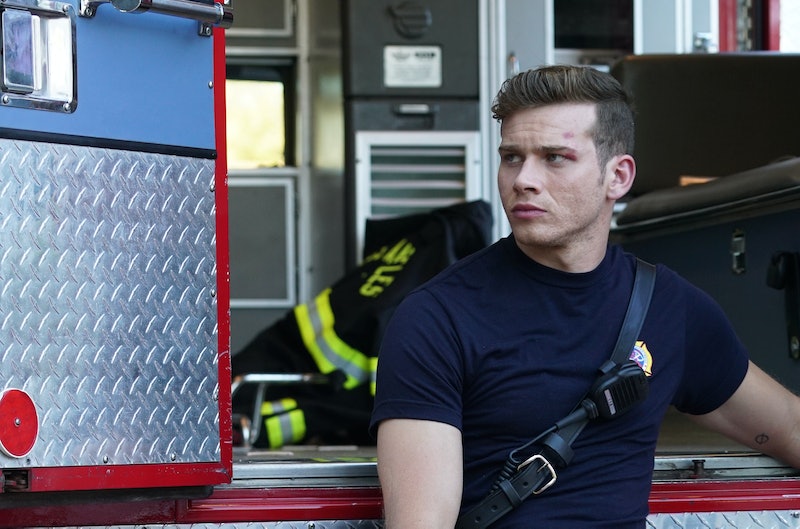 The three main actors of 9-1-1 — Angela Bassett, Connie Britton, and Peter Krause — are extremely familiar to TV viewers, but their characters need a lot of assistance in their jobs as first responders. One of the most notable supporting characters in the pilot is firefighter Buck on 9-1-1. Oliver Stark plays Evan "Buck" Buckley, and whether you loved or hated his character after the pilot aired on FOX on Jan. 3, he undoubtedly made an impression on you. Spoilers for the first episode of 9-1-1 follow.

Beyond their nerve-racking professional duties, 9-1-1 gave a glimpse of the stressful personal lives of each of the three main characters. Britton's 911 operator Abby Clark has a mom at home with Alzheimer's disease. Krause's fire captain Bobby Nash is back on the job after years of battling alcoholism. And Bassett's police sergeant Athena Grant has a husband who recently came out as gay. But they aren't the only characters with drama outside of their careers and the other member of the crew whom viewers got the most insight about was hotheaded Buck.

The young firefighter — who never heard of Rambo, Conan the Barbarian, or TLC's "Waterfalls" because, "Dude, as far as I'm concerned, the world began the day I was born" — seemed like just an immature womanizer at the start of the series. And, in many ways, he was — since he put lives in danger when he took the fire engine to have sex with women. Yet, by the end of the episode, it's revealed that his behavior may be caused by a sex addiction. Despite some reckless behavior on the job, he is truly passionate and fearless when it comes to being a first responder. (Not that any of that excuses his behavior, but it does make his character more complex than at first sight.)

Buck's evolution in the pilot is almost too quick, but 9-1-1 obviously wants to make him a noteworthy character that fans will root for. While he will inevitably embark on more foolish behavior in future episodes, the pilot shows that his heart is in the right place — at least when it comes to the main aspects of his job. After all, if Buck can earn Bassett's character's approval in just one episode, he may be able to earn everyone's approval by the end.

Like the other characters on 9-1-1, Buck doesn't appear to be based on any specific firefighter. Instead, Stark is portraying a fictional character. Although Stark doesn't have the same notoriety that Bassett, Britton, and Krause have, he may be familiar to TV fans. The British actor's biggest role before 9-1-1 was on AMC's Into The Badlands as Ryder, the son of the bad guy baron, Quinn. Like his 9-1-1 character Buck, Ryder in Into The Badlands is entitled, arrogant, and not very respected. But Ryder on the sci-fi show didn't have the same level of goodwill or bravery as Buck has.

Stark also appeared in an episode of Idris Elba's show Luther and he was in 2016's Underworld: Blood Wars. But 9-1-1 seems like it will be his breakout role. And even though Buck may have irked you with his showboating, Stark seems like a much more likable person in real life. He calls himself a feminist and uses #BlackLivesMatter on his Twitter profile and has acknowledged all the real-life firefighters who put their lives on the line to save others.

Although Buck's future with the Los Angeles Fire Department was in jeopardy during the pilot of 9-1-1, Krause's character gives him another chance after Buck quickly thinks to stop a burglar with a fire hose. And with Krause's Bobby, Kenneth Choi's Howie "Chimney," and Aisha Hinds' Henrietta "Hen," Buck will have support in the fire station as he matures into his heroic role and deals with his sex addiction. (Not to mention, he seems to share a connection with Abby and earns respect from Athena all in the premiere episode.) So while Stark admitted on Twitter that he had considered quitting acting only a few months ago, you'll see plenty of him as his character Buck continues to evolve on 9-1-1.