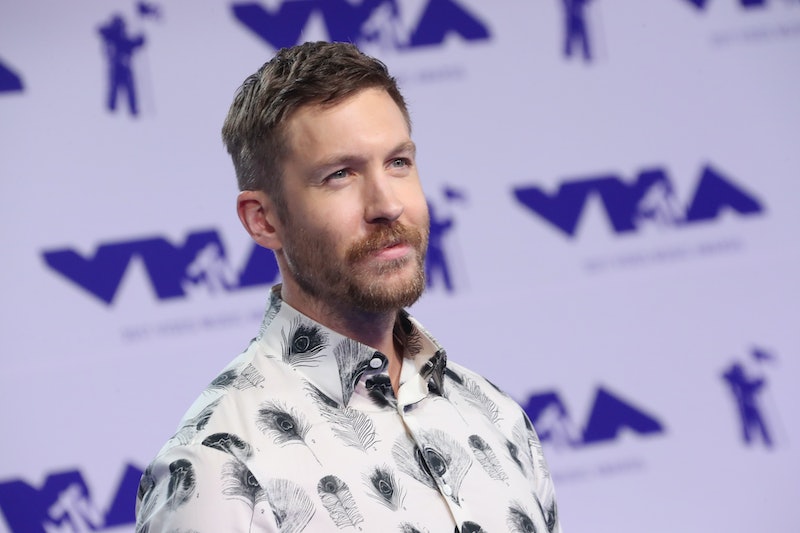 Returning host Jack Whitehall will take the reins of the 2019 Brit Awards, which will see a plethora of the worlds biggest music acts attend with the hopes of nabbing a BRITs trophy, and to perform their hits from the past year. This year's esteemed guest list includes the music industry's finest, featuring names such as Sam Smith, Dua Lipa, Lily Allen, and Calvin Harris. But what exactly has the superstar DJ been up to recently? And who is Calvin Harris dating in 2019?

Well, according to the Daily Mail, Harris is currently dating U.S. model, Aarika Wolf. The pair have reportedly enjoyed an on-off relationship, having first dated back in 2015 for seven months after meeting on the set of his music video for "Blame." The "One Kiss" hitmaker reportedly began dating Wolf again, shortly after his split with fellow music superstar, Taylor Swift, and in March 2018 the couple reunited for a second time. Bustle have reached out for comment on the current status of the relationship, and will update with any information once it becomes available. The Scottish musician's social media doesn't give much away, suggesting he prefers to keep his relationship private, which is totally fair enough.

Wolf was born in North Dakota back in 1994, and achieved significant fame on Instagram, before being signed to Vision Model Management, reports the Daily Mail. She then moved to Los Angeles in order to pursue a career in the world of modelling, where she ended up crossing paths with Harris. The model has an impressive 190k followers on the social media app, where she posts updates about her life, sharing a post a few days ago that she was in the UK. According to The Sun, this is not the first time the Scottish DJ has dated a public figure, having since been in relationships with Taylor Swift and the "I Will Never Let You Down" songstress, Rita Ora.

However, Harris' focus in recent days will have surely shifted to his debut Brit Awards performance, which is due to take place live at the 2019 ceremony. His planned performance sounds pretty epic, and according to the Mirror, the DJ is being billed as the headline act of the entire night. No pressure. Joining one of the most successful British DJs of all time will be a lineup of stars who he has worked with previously, which includes Sam Smith, Dua Lipa, and Rag'n'Bone Man. The performance will reportedly work as a medley of his biggest hits with these particular artists, which means viewers can look forward to dancing along to songs such as "Promises," "One Kiss" and "Giant."

The 2019 Brits ceremony already sounds like one for the history books, and if like me you don't want to miss out on a single slice of action, you can watch the BRIT Awards live on Wednesday Feb. 20 at 8.00 p.m. on ITV1. Or alternatively, you can stream the show live on the official Brits Youtube channel. I can't wait.

More like this
Vick Hope Had A Very Relatable Reason For Turning Calvin Harris Down
By Sophie McEvoy
Tom Sturridge & Alexa Chung Are Enjoying A Summer Of Love
By Frances Stewart
At 28, Lesley Manville Was Acting, Picketing, & Singing Kate Bush Songs
By Olivia-Anne Cleary
Nicholas Hoult Has The Sweetest Things To Say About His Family
By Sam Ramsden
Get The Very Best Of Bustle/UK