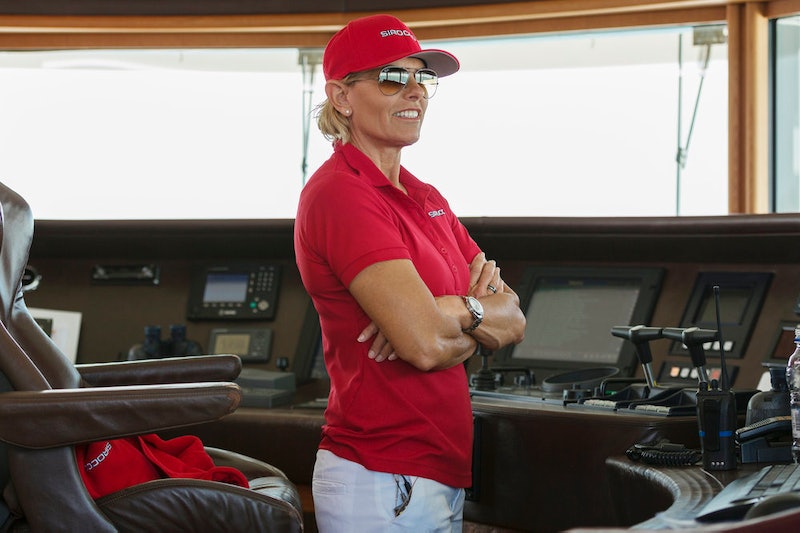 The past few weeks have been busy for Captain Sandy Yawn. The new season of Below Deck Mediterrenean started airing, of which Sandy is a primary cast member. But she also went public with a new relationship. Captain Sandy's girlfriend is Leah Shafer, a gospel singer who connected with the captain over Facebook and a shared love of god.

The two women did an interview with The Cheat Sheet about their relationship where they revealed that Leah initially reached out to Sandy on Facebook after watching Below Deck. "She sent me a nice message that said, 'I came across your show, congratulations, many blessings,'" Sandy told the outlet. The phrase "many blessings" caught her attention, because Sandy considers her religion a big part of her life. When she found out Leah was a gospel singer, it was basically a match made in heaven.

Leah felt the same way. She told the outlet that once she met Sandy, she just knew. "It was definitely unexpected," Leah said. "It just happened, when you meet another soul that you connect with at such a deep level, it is unexplainable and so beautiful."

Their connection was so strong that Sandy moved to Colorado to be closer to Leah. However, their union hasn't been met with complete acceptance. Because of Leah's gospel singer occupation, Sandy tweeted that some churches have now turned Leah away since she came out as dating Sandy.

Leah isn't letting it get to her, though. "I think you can’t help who you fall in love with," she told The Cheat Sheet. "God is love. He doesn’t care."

For Sandy, love is also just love, which is what she tweeted when the interview originally came out.

And not everyone has had negative things to say. Sandy added in another tweet that she saw all the nice messages people were sending, and she really appreciated them. "Thank you all so much for the beautiful and loving tweets! I'm overwhelmed with your happiness for us. Much Love!" she wrote.

Sandy told Bravo TV that ultimately this whole relationship is just about love to her — not about labels. "I have loved men and I have loved women and I don't have a label," she said. "I want to be just another human being walking the planet; all I want to do is love and be loved. And it's that simple." From the looks of Sandy's Instagram she is loving and being loved very much.

"Living in Denver and so happy, having a blast with @leahraeofficial!" she wrote in the caption, tagging her girlfriend.

She Called Leah The Love Of Her Life

"Enjoying the Colorado Royal Gorge with the love of my life," Sandy wrote in this photo's caption.

They Went To The MTV Movie Awards Together