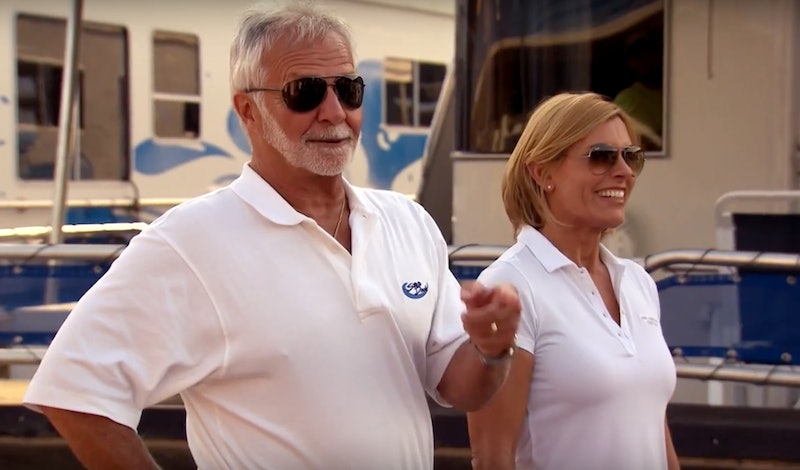 Like a sundeck hot tub that’s been commandeered by a foam-obsessed primary, the Below Deck and Below Deck Mediterranean crossover of your dreams is about to bubble up in a big way. The sixteenth season of Top Chef will bring Captain Lee Rosbach and Captain Sandy Yawn together, and thanks to the Season 16 trailer, Below Deck heads can catch a glimpse of the two venerated boat captains on the cooking competition series. Yes, Top Chef: Kentucky will give us a triple Bravo crossover.

Now, if you happen to be a Top Chef fan who is not familiar with either of the Below Deck shows, here’s what you need to know: Captain Lee is the lovable and charmingly gruff captain who’s been tasked with running the ship on all six seasons of Below Deck, and Captain Sandy is the lovable and charmingly energetic captain who has been on Below Deck Med since Season 2. Both captains rule.

What do the two Below Deck titans do while they’re on Top Chef, you ask? Why, they spend some time at Lake Cumberland in Kentucky. According to Bravo’s The Daily Dish, the Below Deck star and the Below Deck Med star will be there for a houseboat challenge. Wow, yes. Sounds terrific. Already couldn’t be more on board.

Will the contestants get split up into two teams, be assigned a houseboat, and then be asked to prepare some dishes while on a houseboat that’s either piloted by Captain Lee or by Captain Sandy? Will it be a Quickfire Challenge where the each of the contestants has to create a dish that highlights an ingredient they find in the kitchen of a houseboat? Will Captain Lee and Captain Sandy drive everyone over to a beach where the contestants will be then asked to do the task that is the bane of every Below Deck/Below Deck Med star’s existence? (That task being, of course, the dreaded beach picnic setup.)

Will Captain Lee and Captain Sandy channel some of their most difficult charter guests and craft a intentionally frustrating preference sheet? And then ask the contestants to prepare a dish that honors the complicated and contradictory preference sheet? Like a foam-obsessed primary who is doing donuts on a jet ski without a life vest on, my mind spins round and round.