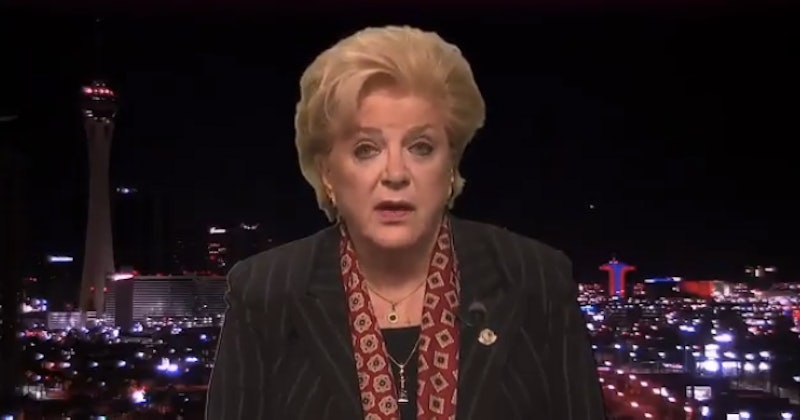 After the mass shooting on Sunday night, Las Vegas mayor Carolyn Goodman vowed the shooting would not define her city. The deadliest shooting in modern U.S. history took place in the flashy resort city, usually known for gambling casinos, nightlife, and entertainment, when a gunman at the Mandalay Bay Hotel and Casino rained bullets on a crowd gathered nearby for a country music concert.

The killing spree left at least 59 people dead and 527 people injured, prompting an urgent call for blood donations. Mayor Goodman appeared on the TODAY show on Tuesday morning to give a statement, determined that Las Vegas would remain a welcoming place. The mayor said on TODAY:

This has been a resilient community. We will not be defined by this sick, disgusting human being — I will never mention his name. And I look to the sky to the new stars that are up there for each one of these beautiful innocent people who were slaughtered.

Mourners have gathered on the Las Vegas strip to hold vigils and casinos paid tribute to the victims on their marquees. Metro police also transformed part of the city's convention center into a family assistance center for those affected by Sunday night’s mass shooting.

Goodman, 78, has been the mayor of Las Vegas since 2011, taking over the reigns from former mayor and her husband, attorney Oscar Goodman. She moved to Las Vegas from her birth town of Philadelphia in 1964 and earned her master's degree in counseling from the University of Nevada, Las Vegas. A mother of four, she adopted all her children, who are now adults in their 40s. As part of Vegas-appropriate novelty, Goodman gives out yellow poker chips with her likeness depicted on them in lieu of handing out business cards — a quirk her husband started.

The mayor identifies as an Independent, although mayoral offices are typically considered nonpartisan. She has endorsed both a Republican and a Democrat political candidate in the past, but for the 2016 election Goodman endorsed neither Hillary Clinton nor Donald Trump.

Goodman has pushed for tighter gun control and background check requirements. She also signed a letter to Obama when he was in office, calling for a ban on assault weapons and high-capacity magazines. The letter in addition called for closing loopholes in the national background check system.

Following the Las Vegas shooting, the mayor gave a statement on Twitter saying the actions of a "madman" should not keep people from living with pride in their shared humanity. She also thanked first responders and law enforcement for their response to the Las Vegas shooting. President Trump called the massacre "an attack of pure evil."

Police identified 64-year-old Stephen Paddock, a Mesquite, Nevada, resident as the suspected gunman. Mesquite is a town popular for retirement, located 80 miles northeast of Las Vegas. From the 32nd floor of the Mandalay Bay Resort and Casino, the shooter fired bullets at a crowd of 22,000 people attending the nearby Route 91 Harvest Festival where country singer Jason Aldean was performing. Paddock committed suicide before police broke into his hotel room and found his body along with 23 weapons. Although terrorist group ISIS has claimed responsibility for the bloodbath and given Paddock a jihadi name, the FBI said it found no link between the Las Vegas shooting and any terrorist organization. Smith's brother has also told news outlets that Paddock showed no indications of political or religious extremism.

The tragedy in Las Vegas has led to an outpour of condolences, support, and donations from people who knew the victims, the Las Vegas community, members of Congress, and strangers.

The Orlando Police Department, which faced a mass shooting in Pulse nightclub in June 2016, also gave its sympathy.

Goodman once had to cut her speech short at a vigil held by the Las Vegas LGBTQ community for the Pulse shooting victims after she told the crowd guns were not the issue, behavior was. The Las Vegas mass shooting, like past mass shootings, has recharged the debate on gun control. Goodman has so far made no comments on gun control or security measures in relation to the Las Vegas killing.