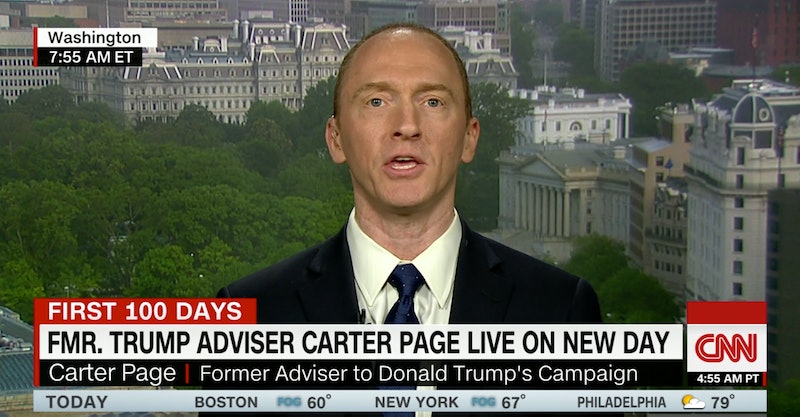 As the investigation into Russian meddling in the 2016 U.S. presidential election continues, POLITICO reported that former Trump campaign foreign policy adviser Carter Page said he won't testify before the Senate Intelligence Committee. Though multiple reports claimed that Page supposedly intends to plead the Fifth Amendment, the former adviser has contested the report, telling The Hill that he offered to testify at a committee hearing on Nov. 1. In turn, CNN reported that the committee had not yet responded to Page's offer.

The oil industry consultant came under criticism last year for allegedly meeting with Russian officials close to Russian President Vladimir Putin in 2016. After the reports emerged, the Trump campaign reportedly distanced itself from Page. White House adviser Dan Scavino Jr. tweeted in April that, in more than 500 days of campaigning, he himself had never even met Page. Back in April, Page went on CNN to defend himself.

"Nothing I ever talked about with any Russian official extends beyond that publicly available immaterial information," Page told Michael Smerconish.

Throwing another wrench into the situation, multiple reports released claimed that Page had previously come under FBI scrutiny for meetings that took place in 2013, long before he started working for the Trump campaign. The New York Times reported that Page had unwittingly met with a Russian spy in 2013 who may have been attempting to recruit Page into a Russian campaign to undermine the impending U.S. election. Page confirmed that he had met with the Russians in question, and told BuzzFeed that his interactions with them didn't concern sensitive topics. At the time, Page was never accused of breaking the law; he has not been charged with any crimes.

According to POLITICO, Page is among the Trump affiliates from whom the Senate Intelligence Committee has requested documents and testimonies. By pleading the Fifth Amendment, Page would avoid having to turn over documents or give compulsory testimony. The Nov. 1 hearing, if the committee agrees to it, would be public.

When news that the FBI had monitored Page broke in the spring of 2017, it was considered some of the first, concrete evidence that the investigative bureau was concerned about campaign members' contact with Russian officials. The concern was — and is — that Russia was solicited for help in swinging the presidential election in Trump's favor. Of course, Trump has denied that his campaign worked with Russia on the election.

Reports that Page has allegedly resisted handing over documents and giving testimony comes as various congressional committees are reportedly fighting over a dossier compiled by former British spy Christopher Steele. The dossier, published in full by Buzzfeed in January 2017, alleges deep ties between Trump and Russia. Trump described the dossier as "fake news," while Russian spokespeople have vehemently denied any Russian tampering in the election.

Reuters reported that the Republican chairmen of the House Intelligence and Senate Judiciary committees are contesting whether the dossier is a reliable document. However, both Republican and Democratic senators in the Senate Intelligence Committee are reportedly taking the dossier seriously. Reuters further reported that the dossier was commissioned by Trump opponents, but that some congressmen have proposed that Russia may have influenced the research firm that hired Steele. Again, Trump has firmly denied the veracity of the dossier.

On Tuesday, reports broke that Republican chairman of the House Intelligence Committee, Rep. Devin Nunes signed subpoenas issued to the firm that hired Steele, Fusion GPS. That move has come under fire because Nunes has informally recused himself from the Russia investigation. According to CNN, the subpoenas were issued on Oct. 4, and they requested documents for later in October and in early November.

The Russia investigation is made up of a seemingly endless list of moving parts, both institutional and individual. As new hearings approach, hopefully at least some of it will be cleared up.