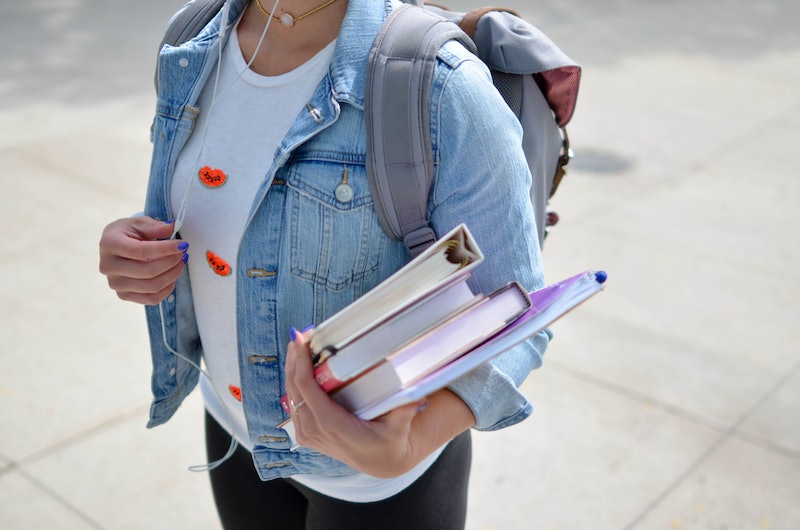 One of the main benefits of attending school as a kid is learning from people whose worldview may be different from the one you grew up with, and to teach people about your own, unique perspective. This applies not just for students who are peers, but also teachers. One Florida teacher is being denied this crucial opportunity for a really senseless reason. An elementary school teacher named Chloe Bressack was removed from a classroom for using the gender-neutral prefix "Mx.," according to the Washington Post, after parents complained on social media.

Bressack, who is transgender, was hired by Leon County Schools in Tallahassee, FL, on Sept. 1 of this year. Upon being assigned a classroom, the teacher sent a note home to parents to notify them that they use the gender-neutral pronouns they/them, and the gender-neutral prefix Mx. (pronounced "Mix"). No big deal, right? Obviously. But not all of the parents agreed, and some parents took to Facebook to express their opinions about the update.

"I don't think it's up to teachers to make these decisions for kids. It's not up to our teachers to teach these kinds of ideas (after all — a boy is a boy and a girl is a girl)," wrote Facebook poster Amanda Somerset, according to the Post, which noted that Somerset said she knew Bressack and considered them to be "a great person."

The story quickly went viral, and has grabbed global headlines. USA Today reported that Bressack and the school district issued a statement to clarify the letter, stating: "My practice in addressing my students is to refer to them by their personal pronouns, be they 'he, she, or they,'" Bressack said.

"We work together to create a positive environment of respect and understanding. I understand that students will not always address me in the way I prefer, and that is okay. We keep moving with a smile and continue on with our learning. In our classroom, our learning and our well-being is the priority." While the school, and many parents are supportive of Bressack, many parents were not, and Bressack was moved to an unspecified "adult" classroom within the district.

"We support [their] preference in how [they're] addressed, we certainly do," Canopy Oaks Principal Paul Lambert told the Tallahassee Democrat. (Throughout this quote, Lambert uses an incorrect pronoun to refer to Bressack.) "I think a lot of times it might be decided that there is an agenda there, because of [their] preference — I can tell you [their] only agenda is teaching math and science at the greatest level [they] can. There has been some (contact from concerned parents), the thing that has brought good understanding is, it's not a preference that's being applied to anyone other than the teacher."

Lambert also confirmed that Bressack would address each student by their correct pronouns, which could be a lifeline for trans students who might not have support at home, or have ever had the opportunity to identify with pronouns other than those which they were assigned at birth.

Parents' request that their children not be exposed to a teacher who asks to be addressed by their correct pronouns does not erase the existence of trans people as these parents might wish. Instead, it robs students of an important opportunity to receive an education from an excellent teacher who has a commitment to expanding the worldview of these kids.

This isn't the first time controversy over trans rights has broken out in the Leon County School District. USA TODAY reported that teachers received training in 2015 regarding dress code, school environment, and discrimination against certain students after a trans student wanted to dress in accordance with their gender identity.

According to USA Today, "The training included ensuring students’ safety but also explained that students are allowed to access facilities, like restrooms and locker rooms, and participate in athletic teams that align with their gender identity."

Shouldn't these same rights be extended to teachers? Bressack thinks so.

"I had people look me in the eye and tell me that I am selfish for being a teacher, selfish for putting myself in a position where I am around children and exposing them to the transgender lifestyle, whatever that is," Bressack told The Famuan, a publication at Florida A&M University. "I will not be spending my entire life pretending to be someone that I am not."