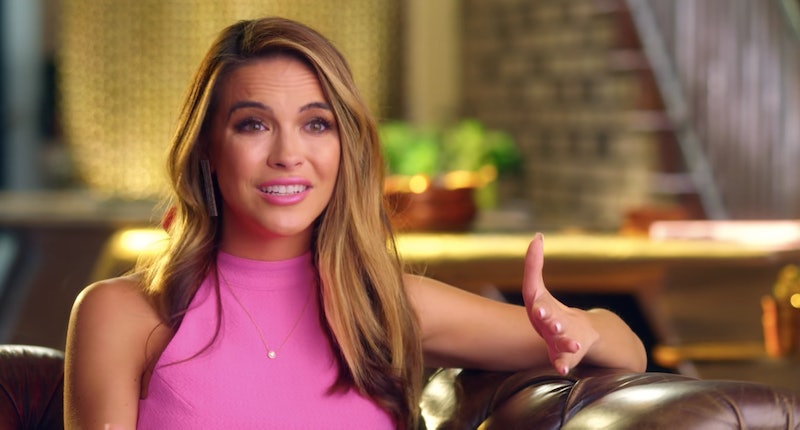 When the resident realtors of The Oppenheim Group learned that a new face would be joining their team, their heads cocked in surprise and confusion. At the time, Selling Sunset star Chrishell Hartley may have been an unfamiliar figure to Christine, Mary, Davina, Maya, and Heather. But her name instantly rang a bell for plenty of viewers at home.

If you're a This Is Us fan, you'd recognize the last name Hartley in a heartbeat. Chrishell is married to Justin Hartley, who plays Kevin Pearson on the beloved NBC drama. And she has an acting history of her own as Amanda Dillon on All My Children and Jordan Ridgeway on Days of Our Lives. But before she met Justin, she nearly wed another well-known TV lead: Matthew Morrison.

He's probably best known for his role as Will Schuester or Mr. Schu in Glee, but since then, Morrison has also worked on Grey's Anatomy, The Good Wife, and Younger. According to an interview Morrison did with the Soap Opera Network, he proposed to Chrishell in 2007, but they split shortly afterward. Morrison was 27 and Chrishell was 25, the same age Romain, her Selling Sunset co-worker Mary's fiancé.

Out of genuine concern for their colleague's relationship, Chrishell and Davina reflected on their past in Episode 4 of Selling Sunset. And in the process, Chrishell threw some serious shade at Morrison. "I didn't know who I was at 25," she said on the show. "And I didn't know what I wanted because actually, if I ended up with the person I was with when I was 25, I would want to kill myself." Yikes. "Yeah you can google that," she motioned to the viewers. "You were a d*ck! Sorry!"

The now 37-year-old took a long time to figure out what she wanted before marrying Justin. According to Good Housekeeping, they were introduced to each other by mutual friends in 2014 and then began dating. Justin proposed after three years of dating, and he and Chrishell had an intimate Malibu ceremony in 2017, which his This Is Us castmates attended.

Both Chrishell and Justin had been through difficult breakups in the past (Justin divorced his ex-wife Lindsay Korman in 2012) and were happy to have found one another. But Chrishell kept it real on Selling Sunset when she said that marriage is hard, no matter how perfect two people are for each other.

"Obviously I want Mary to be happy, and hope this is the right move for [her and Romain]," she said. "As somebody who is married, and I'm married to someone who is a wonderful person, sometimes it's freaking hard, so I just hope that at 25 years old he knows what that entails, asking someone to marry you. Because it's not always easy."

It sounds like Chrishell really knows what she's talking about when it comes to mastering a relationship, and that she's learned from her mistakes. Hopefully, her words of wisdom and that touch of bitterness act as a warning not just for Mary, but for anyone considering saying, "I do."