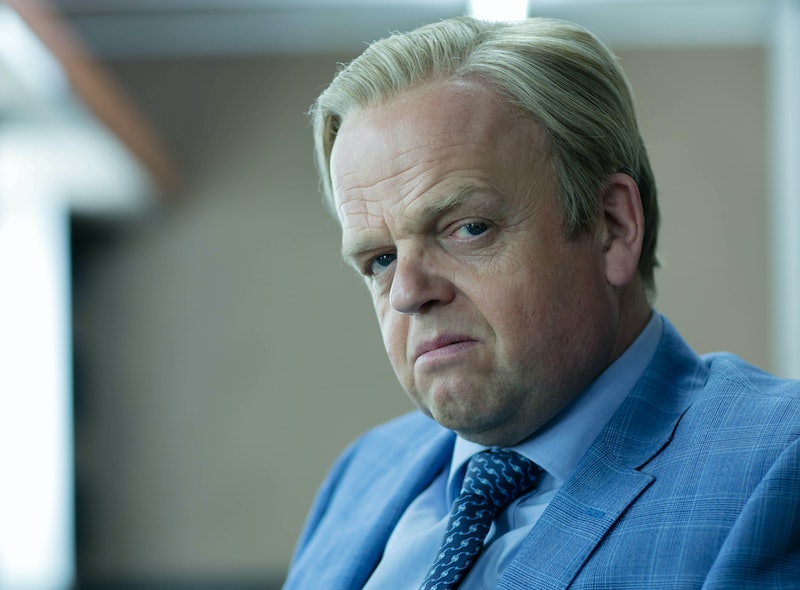 Over the past three seasons, Sherlock Holmes has faced his fair share of clever murderers and devious manipulators — including his two biggest enemies so far, Jim Moriarty and Charles Augustus Magnussen. But with both of those arch-nemeses dead going into Sherlock Season 4, our dashing detective is going to need a new foe to go up against… and it seems like he's been provided exactly that in the form of Culverton Smith, played by Toby Jones. But that name is likely not as well-known to casual Holmes fans as Moriarty, so the question remains: Who is Culverton Smith, exactly?

Filmgoers will likely recognize Jones from his roles in blockbuster franchises like Harry Potter (as the voice of Dobby the House Elf), The Hunger Games (as the ridiculously coiffed commentator Claudius Templesmith), and Captain America (as the duplicitous Nazi scientist Arnim Zola); TV audiences will also know him as Dr. Pilcher on FOX's Wayward Pines. But, judging by the Sherlock Season 4 promos released by the BBC, Culverton Smith might just be his most villainous character yet — and that's certainly saying something, given Jones' resumé. Even series creator Steven Moffat has gone on record with Collider saying that Culverton Smith is "the darkest villain we’ve had."

So who is this man who accomplishes the seemingly impossible feat of being more intimidating than both Moriarty and Magnussen? The character will make his debut in the second episode of the season, "The Lying Detective"… and that title is the biggest clue as to the identity of our newest antagonist. The title seems to be a direct riff on Sir Arthur Conan Doyle's 1913 story "The Adventure Of The Dying Detective," which featured a battle of wills between Sherlock Holmes and none other than — you guessed it! — Culverton Smith.

(Possible spoiler alert depending on how closely Sherlock adapts "The Dying Detective.")

In that story, Watson enters 221B Baker Street one day to find Holmes apparently dying of a rare disease. The detective's final request is that his partner summon a man named Culverton Smith, a doctor who may be the only man who can save him — the problem being that Holmes once accused him of murdering his own nephew, so relations are strained between them. In the end, it's revealed that Smith really did kill his nephew with the same disease, and then sent a box poisoned with the same illness to Sherlock in an attempt to kill him as well. Of course, the detective was smart enough to avoid infection and was simply feigning his sickness the whole time to get Smith to confess. With his confession overheard by Watson, Smith is arrested and brought to justice.

It remains to be seen how faithful "The Lying Detective" will be to its source material, and how Moffat plans to adapt Doyle's short story to modern times. (Perhaps instead of an obscure disease, the threat in question will be some sort of biological weapon with Culverton Smith as an egomaniacal terrorist rather than a murderous doctor?) Whatever the case, Moffat also told Collider that, while Moriarty was "charming" and Magnussen was "amoral," Smith distinguishes himself from his predecessors by virtue of being "the purest evil." "Sherlock is actually appalled by him," he told the website. "He's the most evil villain we've had. I don't think that when you see it, you will disagree. He's horrific."

"It's an interesting thing to chart. We made our Moriarty very different to Doyle's. He's Irish, and he brings all his charm, his twinkle, and his humor to it while he's also terrifying. Magnussen was a very blank, chilling businessman. He doesn't see what he's doing as evil. Toby is doing something very interesting. He's an avuncular, funny-seeming man with terrible teeth. We've given him terrible teeth, which are symbolic of the rot inside him. It's a great complex, shaded character. You’re not quite sure what the relationship is with him.

We'll find out exactly what Culverton Smith has in store for Sherlock Holmes when "The Lying Detective" airs on Sunday, Jan. 8.