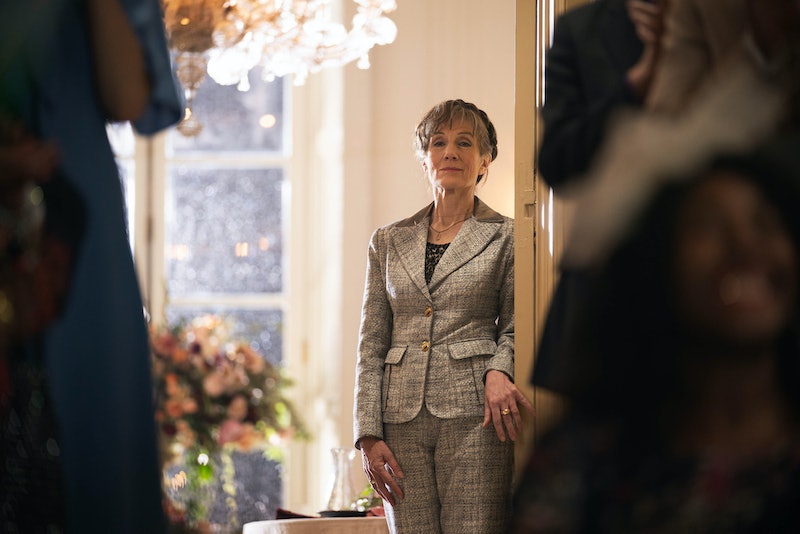 Over the long Easter weekend, there was a lot of good TV to tune into – the bonus episode of Netflix's Tiger King, BBC's The Nest and ITV's Quiz – and the first instalment of Killing Eve series 3 was released. Two weeks early, too. If you haven't watched yet, go do that to avoid spoilers, then come back and we can discuss. Episode 1 raised the question: who is Dasha in Killing Eve series 3? And what is her story?

The season premiere introduces Dasha, played by Harriet Walter (who you might recognise from '90s classic Sense & Sensibility, and roles in Downton Abbey, Call The Midwife and The Crown, as Mrs Churchill), as a figure from Villanelle's past. With an immaculate Russian accent, Dasha appears unannounced at Villanelle's wedding to another newbie, her none-the-wiser Spanish wife.

After the obligatory Killing Eve fight scene – "This is my special day," Villanelle hisses, mid-grappling; "Sincere congratulations," Dasha quips – it turns out Dasha is Villanelle's ex-murder mentor, who has returned to be her new handler. But, first, she needs to persuade Villanelle to return to the life of contract killing. As the ever perceptive Villanelle asks, what's in it for her?

Speaking to The New York Times about Dasha, Walter said: "She is a great character, with a kind of fanatical patriotism about Russia that Villanelle doesn’t have... There is a certain anarchy about both, and about it all; I think people love that outrageous daring.”

New lead writer on Killing Eve series 3, Suzanne Heathcote, is reported to have said she brought Dasha in to switch things up. While Villanelle's relationship with her previous handler Konstantin (Kim Bodnia) was close, Heathcote wanted to explore "a female-female dynamic for a handler", she told Showbiz Cheat Sheet.

Cut to the gymnastics training floor, where ex-competitive gymnast Dasha is coaching a group of young Spanish girls, while Villanelle advises them that the way to really wound Dasha is to challenge her Russian patriotism. It's this playful respect that's set to unfold throughout the series, as Villanelle returns to working for The Twelve – starting with the particularly elaborate killing of a "political agitator", the style of which is Villanelle's homage to one of Dasha's early killings.

And the reason for Dasha wanting Villanelle to return to the fold? Apparently, Villanelle is Dasha's ticket to being sent home to Russia – or, at least, that's what she claims. We're skeptical, however, as previous series of Killing Eve have taught us that transactions are never that straightforward. Meanwhile, Villanelle's requested pay-off for coming back to work are a higher status in the organisation, above Dasha, as a keeper. So, we'll see if that wish is granted too, as series 3 progresses...

Each episode of Killing Eve series 3 airs on BBC iPlayer every Monday, and on BBC One every Sunday, starting April 19.

More like this
Everything To Know About The 'Daisy Jones & The Six' TV Series
By Maxine Harrison and Brad Witter
6 'Happy Valley' Easter Eggs You May Have Missed
By Sophie McEvoy
Claire Foy Spoke Out About 'The Crown's Gender Pay Gap
By Sam Ramsden
'Bridgerton' S3 Will Show A *Very* Different Side To Kanthony
By Sam Ramsden
Get The Very Best Of Bustle/UK
Sign up for Bustle UK's twice-weekly newsletter, featuring the latest must-watch TV, moving personal stories, and expert advice on the hottest viral buys.