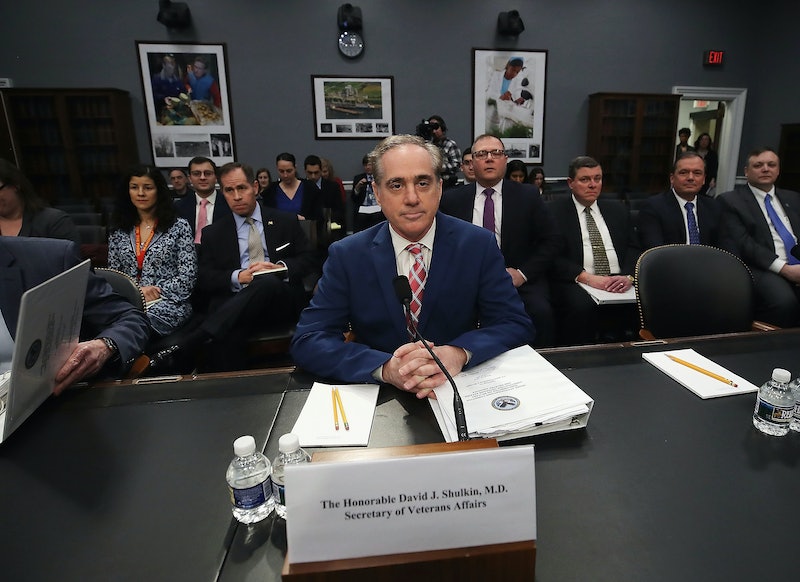 Donald Trump's veterans affairs secretary could lose his job pretty soon, according to an Associated Press report published on Monday. The AP says it spoke with officials from the Trump administration who requested to remain anonymous. To really put things into perspective, one of the officials told the AP that the likelihood of Trump firing Veterans Affairs Secretary David Shulkin is supposedly "50-50." Bustle has reached out to the White House for comment and will update accordingly.

For the Department of Veterans Affairs, which reportedly employs a whopping 370,000 people according to the AP, Shulkin's possible ousting could lead to major issues. Observers have actually written against the idea of kicking Shulkin out as it could, they say, worsen living conditions for veterans by leaving budget proposals in limbo.

More public figures have also echoed the same rumors about Shulkin who previously worked as the Under Secretary of Veterans Affairs for Health in Barack Obama's administration. Newsmax CEO Christopher Ruddy (who is also a friend of Trump's), for example, appeared on ABC News' This Week on Sunday and said that Trump may oust Shulkin in the not-too-distant future, at least according to his own sources. A major shakeup is on its way "very soon," Ruddy claimed. He said,

[Trump] did say that he’s expecting to make one or two major changes to his government very soon, and that’s going to be it. Now, other White House sources, not the president, tell me that [Shulkin] is likely to depart the Cabinet ...

In case you're wondering if Trump likes anyone in his administration, Ruddy said that the president is "happy with the job [Housing and Urban Development Secretary] Ben Carson is doing" along with White House Chief of Staff John Kelly.

If Shulkin indeed gets booted from his position, though, Veterans Affairs Secretary Thomas Bowman will assume the role of acting head of Veterans Affairs. The Senate will then have to select a nominee to fill Shulkin's vacancy. The AP report confirmed that the top contenders for the position, so far, included Fox and Friends contributor Pete Hegseth, former chairman of the House Veterans Affairs Committee Jeff Miller, former Veterans Affairs deputy secretary Leo Mackay, and a few other names.

The report arrives after the beleaguered veterans affairs secretary was accused of abusing taxpayer money for personal affairs in February 2017. According to a scathing report by The Washington Post, Shulkin had allegedly used taxpayer funds to finance leisure and personal activities, such as reportedly flying his wife, Merle Bari, out to England and Denmark. The Post's investigation was based on an itinerary that it accessed and was later on confirmed by a Trump administration official.

In response to The Post's investigation, Shulkin's press secretary Curt Cashour said that the veterans affairs secretary's travels were relevant to improving conditions for veterans in the United States. Cashour also told The Post that the trip to Europe was "reviewed and approved by ethics counsel." In the emailed statement he added,

These were important trips with our allies to discuss best practices for taking care of veterans. The secretary has been transparent on his down-time activities that were similar to what he would have done with his family over a weekend in the U.S.

Even so, according to the AP, anonymous administration officials claimed that the president's confidence in Shulkin was taking a beating after accusations of unethical activities surfaced. But Shulkin has denied the report of misconduct and said that he was the target of internal "subversive events" led by political appointees.

If the predictions of these unnamed officials turn out to be true, Shulkin will be yet another name to get struck off in Trump's government. In fact, turnover in Trump's administration is so frequent, it's being researched. Some organizations are even tallying the names and titles of people dropping out of the administration. The Washington Post, for example, estimates that at least 35 people have either been fired or have left Trump's presidency since he became president.

In terms of percentage, the number of people who have left his administration doesn't look too good either. Nonprofit organization Brookings, based in Washington, D.C., estimates that the turnover rate in the president's top administration is at an eyebrow-raising 48 percent.