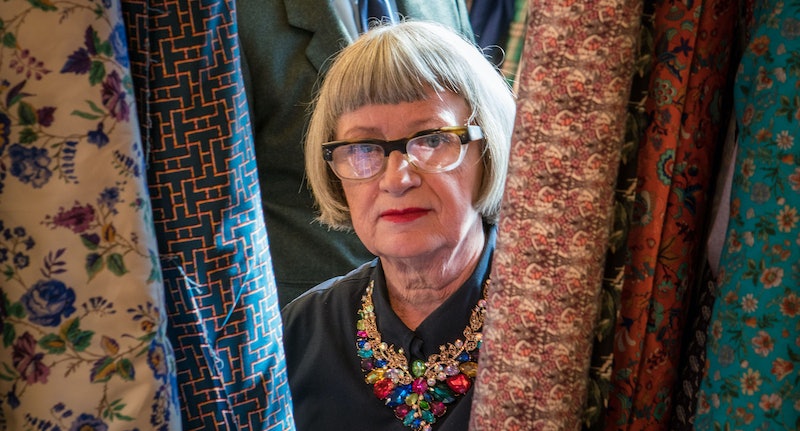 If you're the kind of person who loves to chill out with a big pack of biscuits while watching The Great British Bake Off, you'll probably be into doing your knitting while watching BBC Two's Great British Sewing Bee (zero shame). If that scenario applies to you, then I'm guessing you want to find out as much as you can about the judges on Sewing Bee. So, who is Esme Young, and what was she up to before appearing as a judge on the BBC Two show?

Young joined Sewing Bee in 2016, and has been judging alongside fellow designer Patrick Grant ever since. The Telegraph has called Patrick and Esme the "trendy versions of Paul Hollywood and Mary Berry," and, TBH, that's a pretty accurate description. Grant is currently the creative director of Norton & Sons, and Young has a hugely impressive history in the fashion industry.

Young started a London-based shop called Swanky Modes in the '70s alongside three other women, the BBC reports, and their clothes were a roaring success, appearing in every magazine from Vogue to iD, and newspapers such as the Sunday Times and the Express. Their clothing was photographed by the likes of Helmut Newton, David Bailey, and Nick Knight, and were worn by everyone from Julie Christie to Grace Jones. So far, so impressive...

These days, Young is still a pretty busy woman, splitting her time between presenting and judging on Sewing Bee, sewing herself, and teaching as a senior lecturer at Central St Martin’s College, according to heart radio. She also created the bunny costume for the first Bridget Jones movie, which, if you ask me, is just about the most iconic costume design in British movie history.

Although she has had a successful career, Young insists she has never been paid "silly money," and she was once made homeless in the 1980s, according to an interview she did with This is Money. Young still rents her central-London home, and reportedly has not saved for a pension if she stops working, This is Money writes.

“Even making clothes for Hollywood films, you do not get paid silly money. It is hard work and takes time," she told This is Money. "Appearing on the BBC did pay well, but it was not a huge amount of money."

Young is back on our screens alongside fellow judge Patrick Grant for the new series of Sewing Bee, which began last Tuesday (Feb. 12) at 9 p.m. on BBC Two. It continues each Tuesday from tonight (Feb. 19), and is hosted by comedian Joe Lycett. The show took a pretty lengthy hiatus since its last season, but not it's back and better than ever.

Speaking to The Sewing Directory when she first started the show, Young said:

"When we first started filming I found it terrifying, all the cameras, all the crew, but Claudia [Winkleman, the original presenter] and Patrick were absolutely fantastic to me. We got on really well, and the whole crew were great and made me feel really relaxed. Patrick gave me tips and looked after me, he would say ‘look there,’ ‘do this’ and that kind of thing."