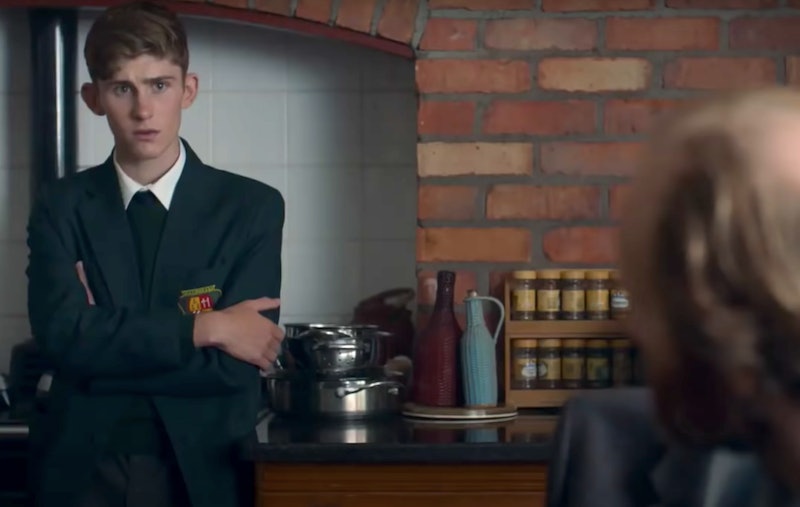 Much to the delight of viewers around the country, ITV has decided to re-release its oh-so-popular 2018 series Innocent. For anyone who has already seen it, the series is sure to be just as thrilling a second time around, and actually full of a few surprises – especially since Fionn O'Shea, who plays Jack in Innocent, has gone on to star in one of the biggest TV releases of the decade: Normal People. That's right – you did recognise him from somewhere.

Innocent is a four-part drama that follows the story of David Collins (played by Lee Ingleby) after he is released from prison. Despite protesting his innocence, Collins was sent down for the murder of his wife Tara, but his conviction has been overturned on a technicality. Now he must try and convince his loved ones – including his two children, Jack and Rosie – that he had nothing to do with Tara's death.

Speaking about the character of Jack to the Irish Independent, O'Shea, who hails from Dublin, said: "He’s grown up his whole life thinking his dad committed this horrible murder of his mum. He’s been living with his aunt and uncle and has done for half of his life but when his dad gets out of prison he wants to reconnect with him and have some sort of relationship, even though he’s grown up thinking his dad was guilty."

The 23-year-old actor also spoke to the Independent about how happy he was the series was shot in his home country. "Because I have kind of grown up in the industry – I started acting when I was 11 – it’s really nice to work in Ireland because I know a lot of the crew. I’ve worked with a lot of them over the years," he said, adding: "Also a big benefit – not to sound cheesy – is that we really do live in such a beautiful country and I definitely take it for granted so filming here gives you a chance to explore the place properly."

O'Shea had the same opportunity when filming his biggest show to date, Normal People. Much of the BBC Three adaptation was shot in and around Dublin. The cast and crew also travelled to Sligo to film, but it's unlikely O'Shea filmed much (if anything at all) down there, as his character, Jamie, is only introduced during the Trinity University years.

Jamie is the obnoxious and thoroughly unpleasant boyfriend Marianne (one of two lead characters in the show, played by Daisy Edgar-Jones) dates during her years at university. He quickly becomes enemies with the show's other lead, Connell (Paul Mescal). Judging from Instagram, however, this rivalry certainly didn't extend to the actors themselves, as Mescal and O'Shea, along with the rest of the cast, appear to have a very strong friendship.

In between Innocent and Normal People, O'Shea appeared in the Hollywood movie The Aftermath alongside an all-star cast including Keira Knightley, Alexander Skarsgård, and Jason Clarke. In 2016, he played the lead in the critically acclaimed Irish film Handsome Devil where he worked with the Hot Priest himself, Andrew Scott.

Speaking about his experience on set with Scott, O'Shea told the Independent: "He’s one of those actors I had looked up to, and still continue to look up to. I’m lucky enough to call him a friend now. I learned a lot from him. He’s so generous and kind of a dream person to work with."

With so many fantastic credits under his belt already, the future looks incredibly bright for O'Shea.

More like this
A New Netflix Doc Will Explore The Unsolved Murder Of Jill Dando
By Sam Ramsden
Rachel Nickell’s Son Wants The Police To Take Accountability Over Errors
By El Hunt
Armani Jackson Is Following In His Famous Actor Sister’s Footsteps
By Catharina Cheung
The Banned 'Friends' Ad Shows Monica As You’ve Never Seen Her Before
By Sam Ramsden
Get The Very Best Of Bustle/UK
Sign up for Bustle UK's twice-weekly newsletter, featuring the latest must-watch TV, moving personal stories, and expert advice on the hottest viral buys.