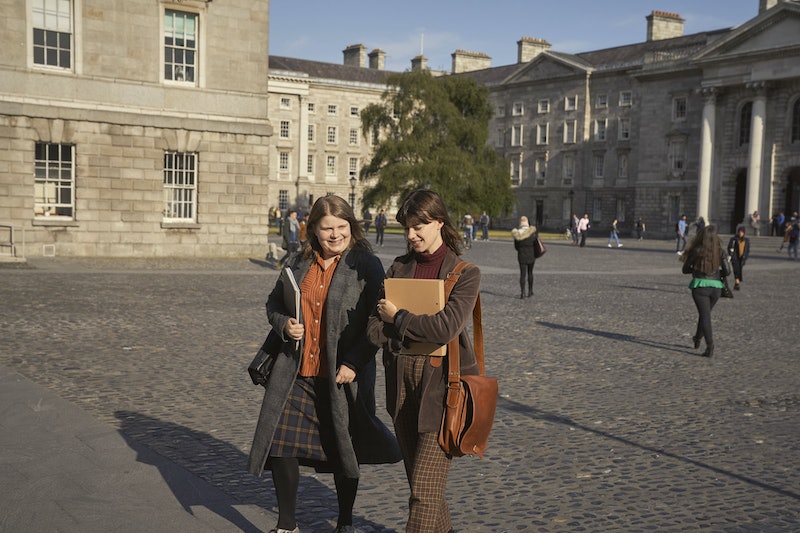 The second trailer for BBC Three and Hulu’s TV adaptation of Sally Rooney's award-winning novel Normal People made lockdown that little bit easier for many of us. Watching TV is now one of the few things that can let us – at least virtually – escape the confines of lockdown living, and Rooney's adaptation is full of luscious green landscapes and beautiful buildings, too. But where is Normal People filmed?

The follow up to Conversations With Friends (2017) has become a modern classic in its own right and tells the story of the intimate, and complicated, relationship of Marianne (played by Cold Feet star Daisy Edgar-Jones) and Connell (Paul Mescal, in his first TV role) from their secondary school days in the west of Ireland to university at Trinity College. In some ways, the pair are complete opposites – he is well-liked and popular, Marianne is described as intimidating and “an object of disgust” at school; she is wealthy and Connell is not – they form an intense bond and their intricate power dynamic follows them to Dublin, where Marianne meets her social stride, and Connell struggles to find his place.

The coastal county of Sligo in the North East of Ireland played host for Carricklea, the fictional hometown of Marianne and Connell. Residents in the town of Tubbercurry, the second largest town in the county, reported a full Christmas tree in the square in the middle of summer 2019, when production was taking place. CN Traveller also reports out-of-season New Year’s revels were spotted celebrated in Brennan’s bar on Teeling Street. Other locations used around Tubbercurry include St John the Evangelist Church and Killoran’s Pub, another bar on Teeling Street.

29-year-old Rooney grew up in Castlebar, Ireland, and herself studied English at Trinity College, the same college that Marianne and Connell attend in the book and the series. The university is also director Lenny Abrahamson’s alma mater, so it's only natural that some of the filming take place at the 428-year-old college. The 16th century institution is already a popular Dublin tourist destination, and production took advantage of its picturesque settings making use of the Robert Emmet Theatre, the library and cricket pitches, as well as the front square for filming.

A third location, however, is still uncertain. In the book, the couple go on a group holiday to Trieste in Italy, but it’s not clear whether the city was used for filming. Scenes were reportedly filmed in Italy and Sweden, too, but we will have to wait to see what those images hold.

Produced by Element Pictures (The Favourite, Room, and The Killing of a Sacred Deer), the twelve-part adaptation is Rooney’s screenwriting debut in collaboration with writers Alice Birch and Mark O’Rowe, while Oscar-nominated Lenny Abrahamson (of Room, The Little Stranger, and Frank) and award-winning Hettie McDonald (Howard’s End) direct. Earlier this year, it was confirmed that Rooney’s debut novel Conversations With Friends will also be adapted for a twelve-part TV series in collaboration with the BBC, directed by Abrahamson.

The full series of Normal People is released on BBC Three on April 26, Hulu on April 29 and will air on BBC One (date to be confirmed).