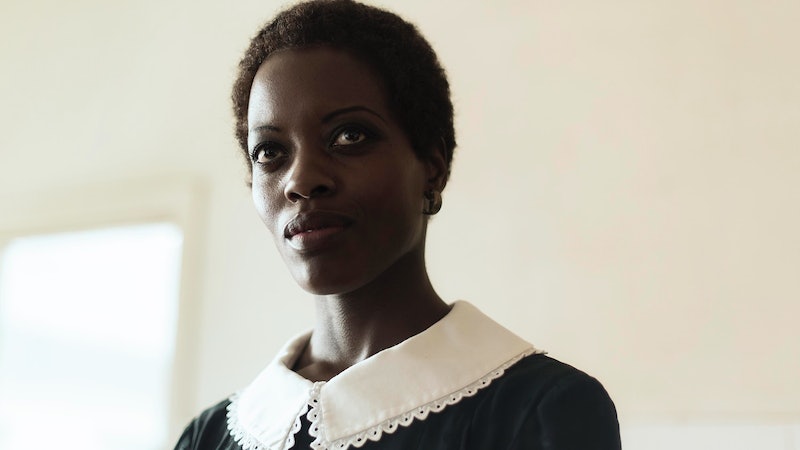 The second series of the cult TV show Deutschland 86 finally arrives in the UK this week. The highly-acclaimed series stars Jonas Nay, Maria Schrader, and Ugandan-German actor Florence Kasumba — who last year appeared in the groundbreaking superhero smash, Black Panther. But who is Florence Kasumba? And what else has the actor appeared in?

According to her official website, Kasumba was born in Kampala, Uganda, before moving to Essen, Germany where spent the majority of her youth. After watching the musical Starlight Express at the age of twelve, her passion for performing began to emerge, and she later earned a degree in acting, singing, and dancing in the Netherlands. During her studies, she landed her first film role as Silke in the hit Dutch film, Ik ook van Jou (I Love You Too.)

After graduating Kasumba went on to enjoy a successful career in musical theatre, appearing in major productions such as The Lion King, West Side Story, Chicago, Evita, Beauty and the Beast, Cats, Mamma Mia, and was cast in the German production of Elton John's hit musical, Aida. After years of performing on-stage, Kasumba was offered a role in Germany's longest running crime show, Tatort, and recently the 42-year-old has gone on to bag major roles in a variety of movies and television shows — including two of the biggest box office hits of 2018.

According to the actor's IMDB page, Kasumba's film and TV credits include the U.S. fantasy series Emerald City, the 2017 superhero film Wonder Woman, and the Academy Award-winning Black Panther in which she portrayed the character Ayo. Later in 2018, Kasumba reprised the character of Ayo in Avengers: Infinity War, and later this year will star in Disney's highly-anticipated remake of The Lion King.

As previously reported, Kasumba recently joined the second series of Deutschland, which makes its long-awaited return to UK television this week on More4. According to Vulture, she will join the cast as Rose Seithathi, an African National Congress operative who is planning a revolution. The new season begins three years after the events of Deutschland 83, and follows Martin Rauch (Jonas Nay) as he is called back to work at the East German foreign intelligence agency, after previously being banished to Africa. His latest mission centres around the emergence of a new form of terrorism, and takes him all around the world to locations including Angola, Libya, Paris, West Berlin, and then back to East Berlin.

Despite proving to be a hit with viewers and critics in a variety of countries, the first series of the German show was a ratings disappointment in its home country. However according to the New York Times, Deutschland 83 went on to become the most watched foreign language drama of all time in the UK.

Series co-creator, Anna Winger, previously revealed that it was always the plan to explore the ways East Germany saw the world outside of its own borders in Deutschland 86. She said: "You don’t often hear about how the East Germans felt their role was in global politics." Speaking to the New York Times, Winger also stated that she wanted to examine some of the lesser-known elements of the Cold War, and explained "the Cold War is now romanticised as this simple, black-and-white world, but if you look a bit closer, you find it was much more complicated."