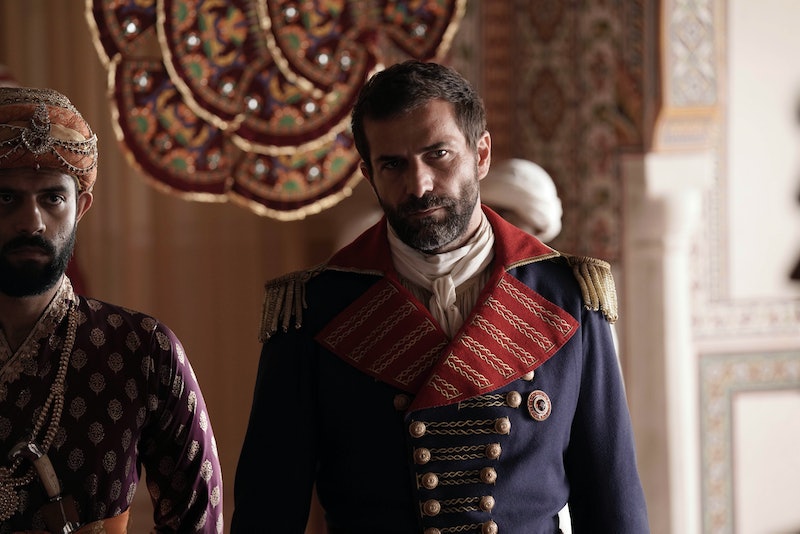 The hugely anticipated period drama Beecham House, which is already been comparing to Downton Abbey, has way too many great things going for it to list. I mean, this show is being directed by the same who gifted the world with Bend It Like Beckham. Plus it's got a killer cast, some of whom you may recognise. Radiating strong John Hamm vibes, Gregory Fitoussi plays General Castillion in the drama, but you're probably more used to seeing him in a beachy setting than in Beecham. So by now, you must be wondering: who is Gregory Fitoussi aka the new General in town?

Fitoussi will be appearing on your screen, sword and all, when Beecham House premieres on ITV1 at 9 p.m. on Sunday, June 23, according to the Radio Times. The show is set in Delhi, which is is quite far from the French actor's usual stomping ground, as you may have seen him strutting about the Côte d'Azur alongside Julia Stiles playing Noah in Sky Atlantic's explosive drama Riviera.

However, Fitoussi is no stranger to a British drama, as he appeared for three seasons (minus the beard he's sporting now) on Mr. Selfridge, before leaving in 2015, as the Radio Times reported on Feb. 15 of that year.

The actor then got all bearded up again when he starred in ITV's 13-part adaptation of epic English poem Beowulf back in 2015. According to Deadline, Fitoussi came into the show in episode 10, and played "Razzzak, a 500-year-old human-creature Skinshibe."

In 2017, we got a taste of life off camera for Fitoussi, as the New York Times went all Cribs, treating readers to photos taken all over the actor's gorgeous Parisian apartment.

Drenched in white, the light and minimalist space reflects the actor himself. "It’s very simple. I don’t have much on the walls. Travelling and meeting people is way more important than having stuff, which can get broken or lost," he told the paper. When asked whether he shared the apartment, the actor confirmed that he was living alone "For the moment. I hope it’s not going to last."

Either he's keeping his romantic life impressively under wraps, or Fitoussi just prefers to remain single. Either way, you won't find much written about the actor's love life, despite the Times calling him the "the heart throb du jour" back in 2016. From the looks of his Instagram, he likes to travel the world alone, as his grid features photos of him posed alone in front of the Taj Mahal and various other famous sites across the globe. But who knows who could be behind the camera?

However, when Beecham House starts, you'll be too entranced by how perfectly Fitoussi fits into his General role to think about his love life. After all, having never even been to drama school, as the Guardian reported on April 13, 2017, this man is surely a natural talent, and one you're going to be keeping a firm eye on within the coming months. He's the nation's new Hot General.