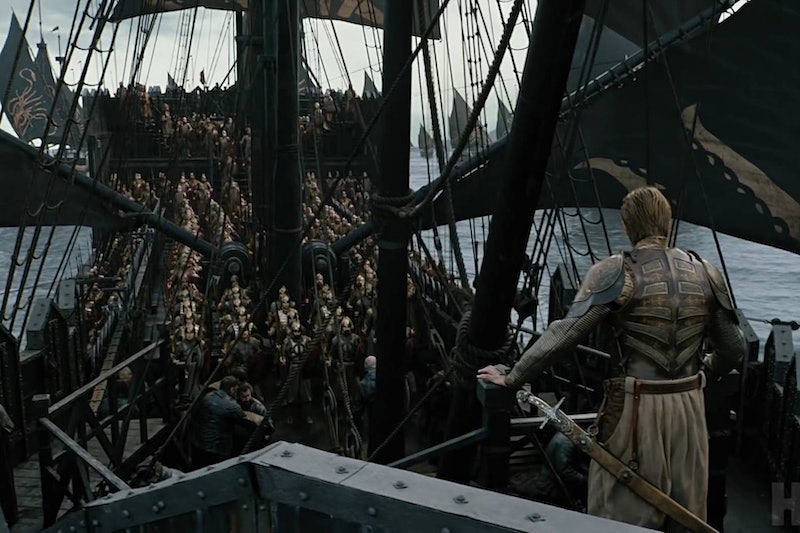 As if Game Of Thrones isn't crowded enough already — still boasting more than 20 series regulars going into its season despite multiple bloodbaths over the years — the show is finding time to introduce one more book character in Season 8. But who is Harry Strickland on Game Of Thrones? If you haven't read George R.R. Martin's books, don't worry; this character is a deep cut even for those who have read A Song Of Ice And Fire. He makes for a surprising eleventh-hour inclusion in the series… and judging by what we know of him so far, his appearance may be surprising even for the most knowledgeable Thrones fan.

In the books, Harry Strickland is the leader of the Golden Company, an army of sellswords in Essos that is famous for one simple reason: they've never broken a contract. (In a world where sellswords are famous for switching loyalties to whoever pays them more, this is quite a boast.) On the page, Strickland cuts a surprisingly unassuming figure. He is described as looking "little like a warrior," short with thin grey hair that barely covers a bald spot. While he's notorious for negotiating lucrative contracts for the company, he's less well-regarded for his skill on the battlefield.

Readers may be taken aback, then, to learn that the show's version of Strickland will look more like this:

Played by the undeniably handsome, blonde-haired blue-eyed German actor Marc Rissmann (The Last Kingdom, Into The Badlands), show-Harry bears little in common with book-Harry, at least in terms of appearance. But what about in terms of plot?

In the fifth book in Martin's series, A Dance With Dragons, the Golden Company is hired by Jon Connington, with the help of schemers Lord Varys and Illyrio Mopatis, to help him conquer Westeros and install Aegon Targaryen, the son of Prince Rhaegar and Elia Martell, on the Iron Throne. Wait, who's Jon Connington? And how is Rhaegar's son still alive? Show-only fans might be a bit confused right now.

To make a (very) long story short, Connington was the former Hand to Mad King Aerys, and a close friend to his son Rhaegar, before being exiled by the king after failing to defeat the rebel Robert Baratheon in battle. In Essos, Connington served as a member of the Golden Company — which was founded by a Targaryen bastard after being defeated in the Blackfyre rebellion — before being fired for stealing from his officers.

Or that was the cover story concocted for him by Varys, at least, who secretly recruited Connington in his plans to install young Aegon on the throne. Aegon, who had supposedly been murdered by the Mountain along with his mother and sister, had actually been swapped with another baby and smuggled out of King's Landing. (Whether that story is true, or whether this "Aegon" is merely a boy raised to believe he's a Targaryen prince, is still a matter of debate among book readers.)

Although Varys originally planned to marry Aegon to his aunt Daenerys, that plan was stymied when Daenerys entrenched herself in Meereen. So he and Connington hired the Golden Company and decided to start their invasion of Westeros alone, hoping that Daenerys would fly to their side as soon as she heard that her kin was retaking her homeland. As of the end of A Dance With Dragons, Connington and Aegon — with Strickland and the Golden Company — had already taken many castles in the Stormlands by surprise, and were marching on the Baratheon stronghold Storm's End.

(In the books, Connington is also the one who contracts greyscale while traveling through the ruins of Old Valyria, a subplot that was shifted to Jorah Mormont on the show.)

So without Jon Connington or Aegon Targaryen, what purpose do Harry Strickland and the Golden Company serve in Season 8? Are they really just cannon fodder for the final battle? If so, why didn't the show just invent a random company of sellswords? The writers must have chosen to bring in a known book character for a reason. Could Strickland be bringing a secret Targaryen heir with him to Westeros, intending to stab Cersei in the back and install Rhaegar's son on the Iron Throne? If six episodes isn't enough time to introduce Aegon's subplot, could the fact that the Golden Company has its roots in Targaryen lineage come into play? Might the mercenaries decide to break a contract for their first time in history and switch sides when they realize who they've been hired to fight against?

Or maybe it's something simpler, a decision based less in plot and more in visual spectacle. In the books, one of Harry Strickland's other trademark characteristics is his love for elephants. The commander's pride and joy is the cavalry of two dozen pachyderms that he and his officers are famous for riding into battle. Will the final battle of Game Of Thrones involve ice zombies on one side, dragons and direwolves on another… and elephants on the other?