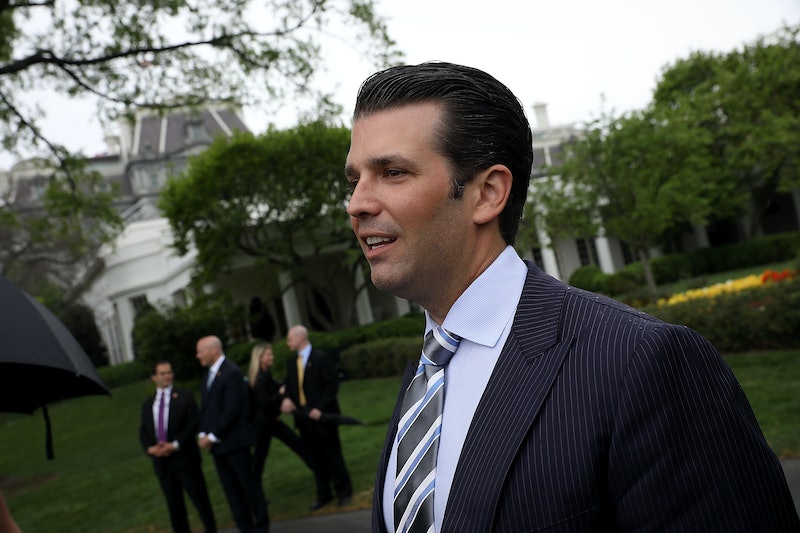 According to multiple media reports on Tuesday, the eighth person who attended the controversial Donald Trump Jr. meeting is Irakly "Ike" Kaveladze, a Soviet Union-born businessman who works for the Russian developer who helped arranged the meeting between the Trump camp and Russian lawyer Natalia Veselnitskaya. Prior to Tuesday, the eighth person's identity had not been revealed — and his attendance at the meeting had not been disclosed by the president's son.

The Washington Post reported that, according to Russian developer Aras Agalarov's lawyer Scott Balber, Kaveladze attended the 2016 meeting — at which Trump Jr. expected to receive damaging information about Hillary Clinton's rival campaign — as Algarov's representative. Kaveladze, the Los Angeles Times reported, “was asked to attend the meeting purely to … make sure it happened. [Kaveladze] literally had no idea what the meeting was about until he showed up right before.”

Kaveladze, who now lives in California, was born in the former Soviet Union in the country that is now Georgia. At the meeting, Kaveladze, The Washington Post reported, believed he would act as a translator for Veselnitskaya, and was surprised when the Russian lawyer brought her own translator. Balber told the Los Angeles Times that Kaveladze does not believe he said anything during the 30-minute meeting last June.

Balber also told the California newspaper that Kaveladze has already been contacted by special investigator Robert Mueller, who is leading the probe into the Trump administration's alleged Russian connections. Kaveladze plans on “cooperating fully" with investigators, Balber said.

The meeting, which has made headlines in recent days, was also attended by Jared Kushner, President Trump's son-in-law, as well as then-campaign chairman Paul Manafort.

Kaveladze, according to Balber, does not understand why the media has placed such scrutiny on the June 2016 meeting. “He’s absolutely baffled,” Balber told the Los Angeles Times. “Even the Agalarovs are absolutely baffled. Nobody had any expectation this would be what it’s become, especially this poor guy, who had not been involved before." Balber added that he believes the Russian family for whom Kaveladze works and whom he himself represents does not feel that this meeting was viewed as crucial by the family.

“This was not a highly important item to the Agalarovs," Balber said. "If it were, I suspect it would have happened very differently.”