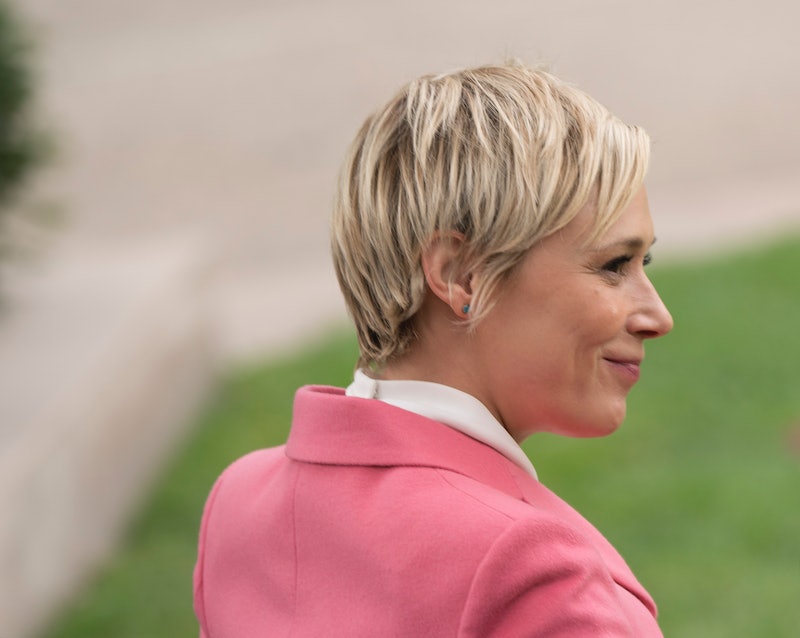 For once on How To Get Away With Murder, the events surrounding the bloody flash forward are way less mysterious than all of the revelations leading up to it. Only Shonda Rhimes knows how to pull off that sort of thing. Bonnie's past is getting more and more twisted, and now there is another, new character named Jake on How To Get Away With Murder, and he might be her son.

Here's how it all happened: Last week, Bonnie went to visit her sister Julie. Turns out it was Julie who kidnapped Bonnie's child — and while Julie claims that their father coerced her into convincing the hospital the baby was hers, there's more to the story than that. After hearing Julie confess\to further keeping secrets at her Narcotics Anonymous meeting, Frank (who of course followed her there) does some digging. He discovers that Julie was arrested for trespassing on the property of a family whose youngest member, a blonde boy named Jake matching the age of Bonnie's child.

Frank surmises that (potentially) their father sold the boy to this family and Julie tried to kidnap him a second time. That's a good theory, as Bonnie was told her son was sold off to a family that (she assumes) had nefarious intentions, but it's still not what really happened.

Julie later confesses to Bonnie, telling her a third and most likely true version — that Julie was caught trespassing because she was dumping Jake near this home to keep him from being raised by her and Bonnie's own sexually abusive father. She tells Bonnie that she buried the baby in the woods. Alive?! Yikes.

Is Jake really Bonnie's son? Did that family rescue him from the woods? We know, or at least we think we know, that Bonnie's son is alive despite whatever Julie thinks happens after she left him in the woods. What about Gabriel? Whose child is he, and why is Frank so obsessed with watching him? How many secret sons does this show have?! Laurel knows what's up with Gabe, and she seems beyond shook by whatever Frank told her. It also seems to be related to Wes, not Bonnie, so maybe Jake really does belong to Bonnie?

Moreover, is Jake going to show up at this wedding? Maybe Bonnie killed him, or maybe she killed Julie. He's cute, from what we saw of him in Frank's file. No Shondaland show would let such an attractive young adult go away that quickly, right? This is probably not the last we've seen of Jake on How To Get Away With Murder. However, the actor is not listed in the credits, so don't go digging for any clues there.

At the end of the episode, Bonnie tries to get revenge by almost having her arrested for the possession of an illegal firearm, but Frank stops her, telling her she'll regret separating mother and daughter. Whatever happened to Bonnie, and whatever happened at the wedding, is really starting to get going. It's also fascinating that Julie and Annalise know each other, and that Annalise fears that Bonnie will lose stability the longer she stays with her sister.

With the How To Get Away With Murder midseason finale only two episodes away, things are finally going to start to be revealed. That's great news, as the addition of Jake really just raises more questions than it answers.