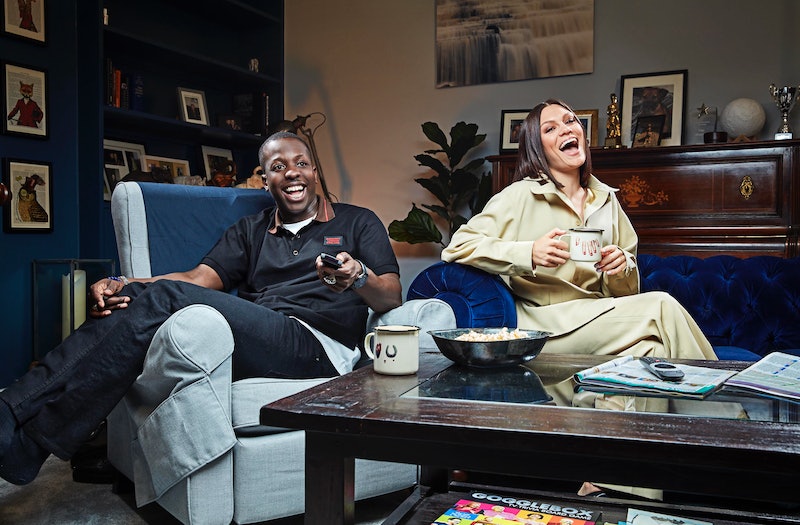 The first ever full series of Celebrity Gogglebox is currently underway, and each episode fans look forward to hilarious TV commentary from some of the biggest names in the UK. The cast of the series includes the likes of Little Mix, Stanley Johnson, and "Price Tag" singer Jessie J — who appears on the Channel 4 show alongside her friend, Jamal Edwards. But who is Jamal Edwards? Here's everything to know about the Celebrity Gogglebox star.

According to the Guardian, Jamal Edwards is an entrepreneur and Youtube star, who is predominantly known as being the founder of the online urban music platform, SBTV. As reported by the BBC, Edwards previously attended Acton High School in London, before moving onto study at Ealing College where he achieved a BTEC National Diploma in Media Moving Image. Jamal was just 15 years-old when he launched the online music channel SBTV, a name which was inspired by his MC title, Smoky Bars. SBTV went on to enjoy whirlwind success, and quickly became the go-to channel for new artists — including the likes of Ed Sheeran.

According to Forbes, Jamal was awarded an MBE for services to music at the tender age of 24, and in 2016, Edwards was named one of Forbes 30 under 30 in European media.

As reported by the BBC, Jamal's business later expanded when he released his own clothing line, and the young entrepreneur was also selected to become an ambassador for the Prince's Trust youth charity. Although enjoying massive success at a young age, Edwards does often remind himself to take a breather from his often fast-paced lifestyle. During an interview with the BBC, he revealed, "I still get bad anxiety at times, if I have too many things going on. I have to sit down and tell myself to take a breather. I think this is one of the most important things for any entrepreneur to remember — that you can't go 100 percent all of the time."

An official Channel 4 synopsis of Celebrity Gogglebox reads, "From Saturday night entertainment juggernauts to the week’s biggest news stories, from hard-hitting documentary series to gritty drama, Celebrity Gogglebox offers sharp, insightful, funny and sometimes emotional critiques of popular and topical TV shows, sparking debate and giving the audience the chance to share those 'we said that!' moments with some of their favourite celebrities."

Celebrity Gogglebox currently airs every Friday night at 9 p.m. on Channel 4, and if you haven't seen it just yet, you can catch up with the spin-off on All 4 — and trust me, you don't want to miss out on this very special edition of the Channel 4 classic.