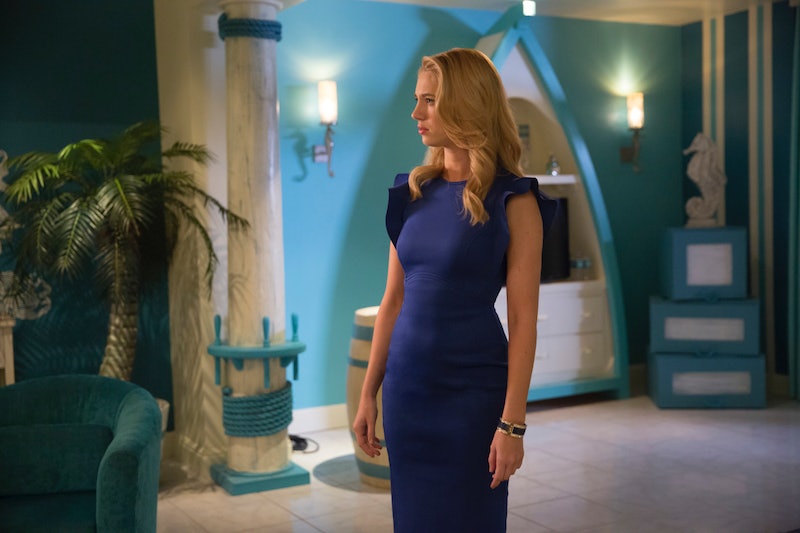 Spoiler alert for "Chapter Seventy-Two" of Jane The Virgin. After what felt like an eternity in TV time, CW’s Jane The Virgin (executive producer: Jennie Snyder Urman) has officially returned to our screens. And this latest development is straight out of a telenovela! When we last left the Villanueva family and friends, Jane and Rafael had just shared a passionate kiss. Alba had refused her boyfriend Jorge’s marriage proposal. And most shockingly, Petra’s evil twin sister Anezka was murdered — for real this time. Fans quickly learned that Petra was indeed involved in the struggle that resulted in Anezka falling over a Marbella balcony to her death, but Petra swears it was self-defense. But regardless, Rafael insists she get a lawyer. Petra does, but it seems her lawyer has a few shady secrets of her own, which has everyone wondering who exactly is Jane Ramos on Jane The Virgin? And who hired her?

Since Petra was the last person to be seen with Anezka before her balcony tumble, she’s the prime suspect in her murder investigation. Jane Ramos, played by Rosario Dawson, is hired to defend Petra and comes off incredibly knowledgable about the legal system. At first Petra is not too impressed and brushes her off, but soon realizes that she needs this Jane in her life. Although, the end of the episode revealed that Jane Ramos isn’t taking on Petra’s case out of the kindness of her heart or because she believes she’s innocent. Instead Jane’s been hired to defend Petra by an unnamed source she delivers the good news to via phone.

Backing up to earlier this season, Anezka, Petra’s mother Magda, and a guy named Carl co-conspired to gain control of the Marbella by convincing Luisa that she was losing her mind — and that Carl wasn’t real. Lucky for them, the plan worked, and Luisa checked herself into a mental institution, signing over her shares of the hotel to Anezka. Soon Petra caught whiff of their dirty plan and threatened Anezka, setting off a deadly chain of events that eventually led to Anezka getting killed not once, but twice.

Right before she really died the second time, Anezka told Petra that she knew about her bait-and-switch plan to turn her against Magda. Petra in turn threatened to tell Luisa about the whole Carl fiasco. But, much to her dismay, Anezka beat her to it, spilling the beans to Louisa and placing all blame on Petra and Rafael.

This makes the obvious choice for Jane Ramos' employer Luisa, though she might be too obvious of a choice. And if there’s one thing fans of Jane The Virgin, have grown to learn, it’s that the answer is rarely obvious. There’s always a twist.

Other possible suspects for Jane Ramos' employer include Magda, who’s been working with Anezka since the very beginning and who could want revenge of Petra for killing her. It could also be Scott, Anezka’s ex-husband who “died,” but whose body was never actually recovered. Lastly, there's Petra’s assistant Krishna, who while might be a far off choice, could fit the bill. Stay with me here.

First of all, Krishna is the one who actually called and hired Jane Ramos. And no offense, but Krishna isn't exactly the sharpest knife in the drawer. How’d she manage to find the best lawyer in the city on the first try? Was it simply a stroke of good luck? A random Google search? Or do she and Jane have some sort of prior relationship? It doesn’t help that Petra’s always incredibly rude and condescending to Krishna, so maybe she’s seeking revenge too.

Krishna is notorious for messing things up and has the "damsel in distress" routine down pat, but maybe she's just a good actor. Maybe she's really Louisa's lover too and wants revenge on Petra for inadvertently getting her sent away.

Nonetheless, no matter who Jane Ramos is or who hired her, one thing is for certain is that Dawson will be appearing on Jane The Virgin for a while. According to Entertainment Weekly, the actress booked a multi-episode arc on the series, though no other details about her character are known.

So if there's anything Petra should do this season on Jane The Virgin, it's watch her back. Jane Ramos is clearly not who she says she is, and something tells me neither is anyone else in Petra's circle.