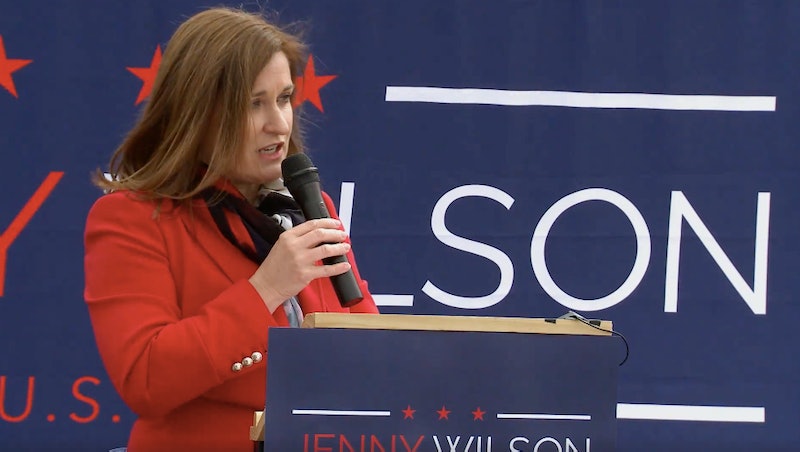 Now that Utah Sen. Orrin Hatch has announced his retirement after seven terms, Democrat and Salt Lake County councilwoman Jenny Wilson will compete against an unknown opponent for the open seat when she runs in November. Wilson has been an outspoken critic of Hatch and her election would signify a major political shift for the state.

"Now that @SenOrrinHatch is retiring, my team will be more important than ever," Wilson tweeted on Tuesday. "Thank you ALL for helping us hit our 2017 fundraising goal — now, let's hit another goal: 10,000 followers on Twitter. Spread the word & let's show how strong & united we are."

In a separate tweet, Wilson said, "While I've disagreed with his approach, I appreciate @SenOrrinHatch's years of service to Utah."

The councilwoman has criticized Hatch in the past for his role in drafting and shepherding the GOP's tax bill through Congress. Wilson feels the new legislation only benefits the special interest groups that support Republican politicians' campaigns.

"Those corporate interests received the biggest presents," Wilson said at a news conference in December. The councilwoman also said the tax bill would leave trillions of dollars of debt for young people to deal with over the next decade — "The $1.4 trillion will be handed down to the next generation."

According to her website, Wilson is a fifth-generation Utahn, and in 2005, she became the first woman elected to the Salt Lake County Council. Now going into her second six-year term, Wilson has pushed for initiatives related to ethics reform, government efficiency, criminal justice reform, and preserving open spaces. Environmentalism has been a particular focus of Wilson's throughout her career: In 2010, she co-founded the Jordan River Commission, an organization that provides resources to local communities and assists with the planning, restoration, and responsible development along the Jordan River.

Before joining the council, Wilson served as press secretary to Democratic Rep. Les AuCoin of Oregon and chief of staff to Democratic Rep. Bill Orton of Utah. She also served as an aide to the Utah state legislature and ran for Salt Lake City Mayor in 2007, losing in the primary to Democrat Ralph Becker. Outside of politics, Wilson has worked for the Sundance Institute and Film Festival, the 2002 Olympic Winter Games, and Voices for Utah Children, a child advocacy organization.

Wilson, who is the daughter of former Democratic Salt Lake City Mayor Ted Wilson, has been a longtime Democrat. She's spoken out in support of the Deferred Action for Childhood Arrivals, which protects young people who are brought to the United States as minors. As part of her Senate campaign, Wilson wants to address everything from developing environmentally friendly transportation to tackling the opioid crisis and improving the economy.

While it's not yet known who Wilson will run against in November for the open Senate seat, a possible candidate is Mitt Romney. The former Massachusetts governor and 2012 Republican presidential nominee now lives in Utah and is popular in the state, according to The New York Times. He's reportedly told associates that if Hatch retired, he'd consider running.

"It would be difficult to defeat Mitt Romney if he were running here," David Hansen, a Utah Republican strategist, told the Times. Should Romney win, his policies wouldn't skew that far from the conservative Hatch. "Of all the people who can run, Mitt will represent and honor the legacy of Senator Hatch more than anybody," Republican fundraiser Spencer Zwick said.

Should Wilson win, she would be a lone Democrat in a Republican-heavy state. However, she said she wants to work to combat the partisanship that's taken over politics.

"We have fallen away from our traditional methods of governance," Wilson told the Park Record, and added that she's learned to compromise and work well with Republicans over the years. "There needs to be a new generation of leaders who are willing to do what I do on a daily basis."