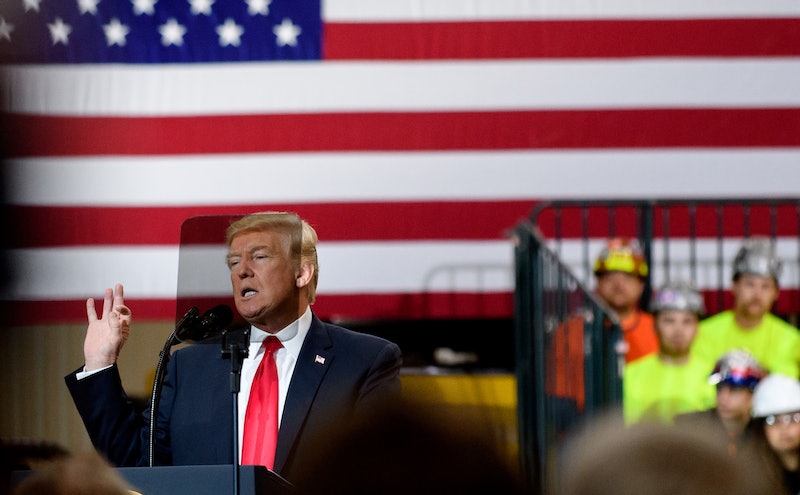 As the high-profile legal tug-o-war continues between President Trump and an adult film actress who is suing to void a nondisclosure agreement (NDA), another woman has stepped into the spotlight with a similar goal. A former Trump campaign staffer is claiming that an NDA she signed while working to help elect Trump is being used to keep her quiet while she attempts to seek damages for work harassment claims. Jessica Denson, who is a 32 year-old actress and journalist, is representing herself in both cases. Bustle has reached out to LaRocca, Hornik, Rosen, Greenberg & Blaha, the firm that represented the Trump campaign in Denson's previous case.

The Trump campaign is seeking $1.5 million in damages from Denson for allegedly violating her NDA. "She breached her obligations by publishing certain confidential information and disparaging statements" related to her workplace-related lawsuit, Trump's camp wrote in a document attached to Denson's March complaint.

According to Denson's complaint, which was filed on March 26, she began working for the Trump campaign in August of 2016. First she worked as a phone bank administrator, and later as a Hispanic outreach administrator. Over a year later, in November of 2017, Denson filed a work-related lawsuit against the campaign, alleging that "she was discriminated against, harassed, and made subject to a hostile work environment, as well as defamed and subject to the intentional infliction of emotional distress."

Her suit, she says in the court document, had nothing to do with Trump's personal life, family members, or business and should therefore not be affected by the NDA she signed. Instead, the lawsuit was entirely focused on other Trump campaign employees and her experiences working with them. The Trump campaign reportedly disagrees. Denson says that the Trump campaign tried to force her lawsuit into arbitration, allegedly claiming that the lawsuit violated an NDA she signed as part of her employment. (The NDA she signed requires that disputes be settled in arbitration, a private alternative to potentially confrontational court case.)

"In effect, the Defendant has weaponized the NDA by using it as a club to thwart and chill employees' assertion that Defendant has violated their legal rights in the course of their employment by the Defendant," Denson wrote in her March complaint. She is asking that a judge rule the NDA unenforceable because she believes it violates her legal rights to freely sue over her discrimination and harassment claims.

Denson's lawsuit makes her the third woman to sue over a hush agreement related to the president. The adult film actress Stormy Daniels is currently embroiled in a highly-publicized lawsuit against Trump, as she seeks to extricate herself from an NDA she claims forced her to keep quiet about an alleged affair she says she had with the president in 2006 and 2007. Trump's lawyer, Michael Cohen, has repeatedly denied the Daniels affair on Trump's behalf. Similarly, former Playboy model Karen McDougal is also suing to get out of an agreement she claims was intended to stop her from talking about a separate alleged affair she had with Trump around the same time as Daniels. A White House spokesperson denied Trump had an affair with McDougal. “This is an old story that is just more fake news," they told the New Yorker. "The President says he never had a relationship with McDougal.”

Denson's original lawsuit, which is attached to her March complaint, alleges that while working for the Trump campaign, she reported another employee for "slander, aggravated harassment, attempted theft, cyberbullying, and sexual discrimination and harassment." The Trump campaign maintains that Denson's lawsuit breaches her nondisclosure agreement.

Still, she insists that her work complaints are outside the scope of her NDA, even though the Trump campaign is attempting to invoke the agreement. As part of her lawsuit, she is seeking $25 million in damages.