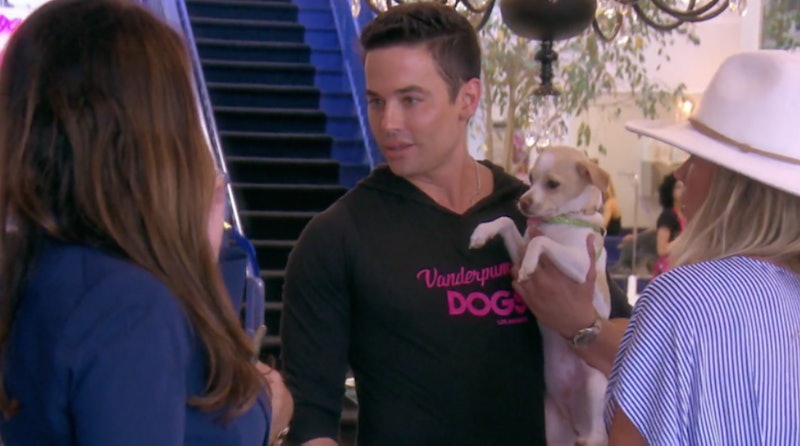 This season of Real Housewives of Beverly Hills has gone to the dogs, literally. All of the drama so far stems from Dorit Kemsley's failed adoption of a puppy named Lucy from Vanderpump Dogs. This is now so confusing and involves plenty of people, including two different guys named John. One is John Blizzard, who viewers met last week and the other one is a man named John Sessa. So who is this guy and why is he so important to Lisa Vanderpump?

While Blizzard runs events at Vanderpump Dogs, Sessa is a little higher up, serving as the executive director for Vanderpump Dogs, according to his bio on the organization's website. Sessa's bio also reveals that he graduated from Wabash College with a degree in both Spanish and business, and he has a doctorate in international business and global finance from Argosy University. So actually, he's Doctor John Sessa.

But, getting back to the Bravo-related content, he has more connections to LVP aside from the Vanderpump Dogs foundation. He was also a co-founder of Vanderpump Pets with Lisa and her husband Ken Todd. Unfortunately, the Bravo ties don't end there. He is deeply embroiled in the Lucy Lucy Apple Juice scandal this season. The fans first "met" John during the Season 9 premiere episode when he asked Teddi Mellencamp Arroyave and Kyle Richards if they recognized the puppy, uttering the nine tiny words that would change the course of the season.

"It's Dorit's dog. She's with us again," he said, as if it wouldn't be that big of a deal. As fans know now, it very much was a big deal. In later episodes the rest of the group accused Lisa of putting her employee and business partner up to the situation and staging the entire conversation.

Lisa adamantly denies being the mastermind behind puppygate and John has corroborated her version of the story. John owned his role in the controversy during a Feb. 26 interview for the On The Rocks radio show. He was very clear about not making any exceptions for anyone who adopts a puppy from Vanderpump Dogs.

"[The foundation is active] in six countries. And I'm supposed to say, 'Oh when something bad happens and it involves a celebrity, we just push that under the rug.' It doesn't work that way," he said. Basically, he felt like it was his duty to call Dorit out for returning the dog the wrong way. And as executive director, he has a point.

Although he's an advocate for all dogs, it turns out that John has a special relationship to little Lucy. Yes, that Lucy. During that same radio interview John added that Lucy was born in his house and bottle fed by him. That might explain why he has been so passionate about sharing this story about what he and Lisa considered a major affront to their business.

Ultimately, John is a not someone who's thirsting for camera time. After all, he has been working with Lisa and Ken for years and he's never been a part of any storyline on Real Housewives of Beverly Hills or Vanderpump Rules. He really explained himself best during that On the Rocks interview when he said, "I have loyalty to my foundation and I have loyalty to my dogs." When it comes down to it, John is a smart man with ample business experience, a love for dogs, and an insistence on doing the right thing. Maybe Lisa didn't stage that conversation after all. It just depends on who you believe.