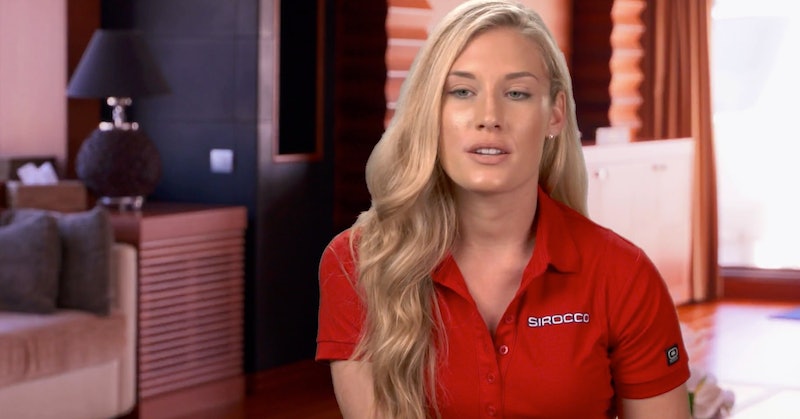 It's time for a mid-season shift on Below Deck Mediterranean. With Chef Mila leaving and Anastasia moving into the kitchen, Captain Sandy needed a new third stew. Enter June Foster, the newest Below Deck Mediterranean cast member. June will come aboard on Monday's July 15 episode, and she already seems super prepared for her new position. Hopefully that will make it easier for her to fit in mid-charter season.

According to a Bravo preview clip, June got picked up in Antibes, France where she'd already been working for four months. (She says she can't speak French, though.) June said in the clip that she can do deck and interior, but Captain Sandy just needed her for interior at the moment to fill in for Anastasia. In the clip, viewers got a peek at June's resume, which is absolutely stacked with experience. She's trained and certified by both the Royal Yachting Association and the Superyacht Crew Academy, and her LinkedIn says that she's been yachting since January 2018. That's not a ton of time out at sea, but it seems she's at least been trained by the best.

June also said in the clip she's "always been a bartender or server" but she loves traveling so much that she wanted to find a job that married both worlds. That's when she got into yachting. She's also not kidding at all about the loving to travel part. She only has 82 Instagram posts, but most of them have to do with her jetting (or sailing) around the world.

She once captioned a photo of herself in Australia, "I'd rather have a passport full of stamps than a house full of stuff," and she's more than living up to that goal. For example, she's been to Italy, Poland, Monaco, the UK, Indonesia, and the Bahamas in the last three years alone.

When she posted her Indonesia photo, one of her followers commented, "How are able to live in all these amazing places?" June credited her yachting life. "I'm a stewardess and deckhand in the yachting industry!" Then she added, "But I’m just here for the yoga." According to June's Insta bio, she's also a yoga instructor. She'll likely be able to bond with Anastasia over that hobby.

Aside from her work on yachts and teaching yoga, June is also a published author. She wrote a novel called The Girl and the Golden Leaf, which came out in 2018. No surprise that it includes both boats and travel as plot points. Here's the synopsis:

"As whitewater rafting guides down the New River in Fayetteville, West Virginia, sixteen-year-old Tia and her twin brother, Finn, hope to find a way to escape poverty after the recent deaths of their parents. When a Hollywood film producer offers the siblings acting roles in his movie, Tia sees the vision of her golden ticket she has prayed for God to provide. How can she refuse? From Chile’s exotic Río Futaleufú, to her captivity in the Amazon Rainforest and the slums of Buenos Aires, Tia’s deep faith touches everyone she meets... but will her faith be enough to survive the darkest pits of humanity?"

When she's not writing or sailing or traveling, June is being an activist, advocating for conservation efforts and children in-need. On her website's "about" page she even listed a ton of organizations she supports in case any of her fans want to support them too. The about page also says that her book is the first in a series of novels that highlight the world's natural wonders and how to save them.

It's not clear when the next book in the series will be out, considering that June's been pretty busy lately appearing on Below Deck and now promoting it. She seems excited about her debut, though. She shared the news of her TV arrival on Instagram alongside this caption: "Holy crap on a cracker. The time has come." Indeed it has, and it seems like June will be a great addition to the team. .