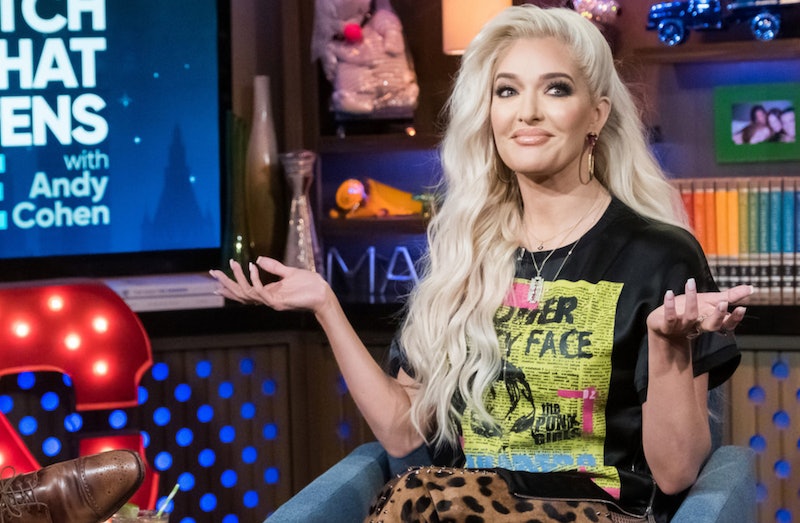 Ahoy, Bravolubbers. Captain Sandy Yawn and Real Housewives of Beverly Hills’ Erika Jayne's Below Deck Mediterranean and RHOBH crossover idea has hit the high seas of the World Wide Web, and it is so good, it will have you patting the puss all over the poop deck. (Does that sound dirty? Sure. But is there a better way to say "dancing on a boat"? No. No, there is not.)

The crossover idea first surfaced over the weekend when Captain Sandy replied to Erika’s tweet about needing a burrito. Erika's original tweet made zero mention of Below Deck Med, but it was a real light bulb moment for Captain Sandy. "We got you covered on #BelowDeckMed," wrote the yacht captain. And then, she took it one step further: “Who else thinks this is the crossover you never knew you needed?!? #BelowDeckMed @BravoTV @erikajayne.” And then, the “Painkillr” singer replied, “I would love it @CaptSandyYawn.” And then, Captain Sandy wrote, “All aboard!”

I know I am a real mark for most Bravo crossover ideas — especially when said idea involves putting any non-Below Deck Bravolebrities on a Below Deck program — but wow, Erika Jayne on Below Deck Med would be a Bravo crossover for the ages. Think of all of the next-level yacht elegance that Erika's team would bring. Think of all of the elaborate hairdos that her stylists would cook up. Think of Captain Sandy and Erika having a laugh as they tuck into a gourmet meal prepared by the yacht chef. Think of Mikey Minden drawing inspiration from the ocean air and then dreaming up an idea for Erika’s next single/music video/tour that is about, like, a magical salty sea queen who runs on espresso martinis or something.

It could be a RHOBH cast trip, it could be a Pretty Mess Krewe trip, it could be an Erika and Tom Girardi trip— I do not care. Any of it would be fine by me. As long as Erika is hanging out with Captain Sandy and the rest of the Below Deck Mediterranean crew on a yacht and the Bravo cameras are present, I will be happier than a clam at high tide.

Now that this crossover idea has pushed off and has officially set sail across the Bravoverse, let us keep the idea out there until it becomes a glorious reality.