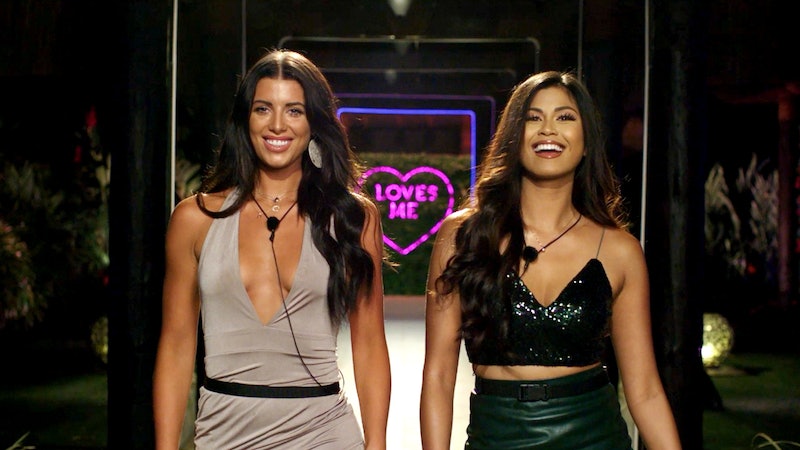 The second week of Love Island barely began before new faces arrived to cheer up those who were less than happy with the results of last week's re-coupling. The Islanders are meeting the new girls, Christen and Katrina, without a search engine. And once you get going, you're going to want to know literally everything you can about Katrina from Love Island? She's used to competing in a swimsuit, so watch out.

The two girls arrived in the middle of Weston's birthday celebration. Could he be the one they're looking to couple up with at the villa? Convenient, isn't it, that Mallory had just told Weston that she's not really interested in him romantically? Hopefully she'll vibe with the to-be-determined new guy that should probably arrive around mid-week, if our Love Island calculations are correct. These setbacks are never too lasting.

The women at the villa retreated to the balcony to watch the women arrive, which left all of the men around to mingle without their significant others nearby. Anyone else clock how, a second after Elizabeth left Zac's side, he openly hoped that the new girls be "dressed as sexy cowgirls" for them? Alliances are hard to trust in Fiji.

Anyway, the birthday boy and Cormac immediately showed interest in both of the new women. It also seems like Cashel's heart was wandering, too, which could be troubling for Kyra. Especially since those two seemed to be getting along so well earlier in the week. But this is what the game is about.

Katrina described herself as a beauty queen, but not like most beauty queens... whatever that means. She's Filipino, lives in San Francisco, and is a business student who also happens to model. According to her social media accounts, she spends a decent amount of time in Manila, where she grew up, as well. Other than that, there's not a whole lot else out there on the internet about the newcomer just yet.

According to her Instagram, she's a fan of Disneyland, travel, and taking pics with tiger, so it shouldn't be too hard for her to start conversations with her fellow housemates. The whole point is to charm as many people in the villa as she can if she wants to stay and it doesn't seem like she'll have a ton of problems with that.

If you're looking up the Love Island cast members on social media, definitely check out Katrina's Twitter as well. Her meme retweet game is pretty strong, and you'll also learn that she goes by Trina — all things that Love Island fans will likely find out soon enough. If she manages to stay, of course.

Will Katrina make an impression on the rest of the men on Love Island? It's entirely possible that she leaves after less than a week. For her sake, let's hope she has what it takes to make friends or forge a romantic connection in that short amount of time. Judging from what fans know already, she's on her way to victory.