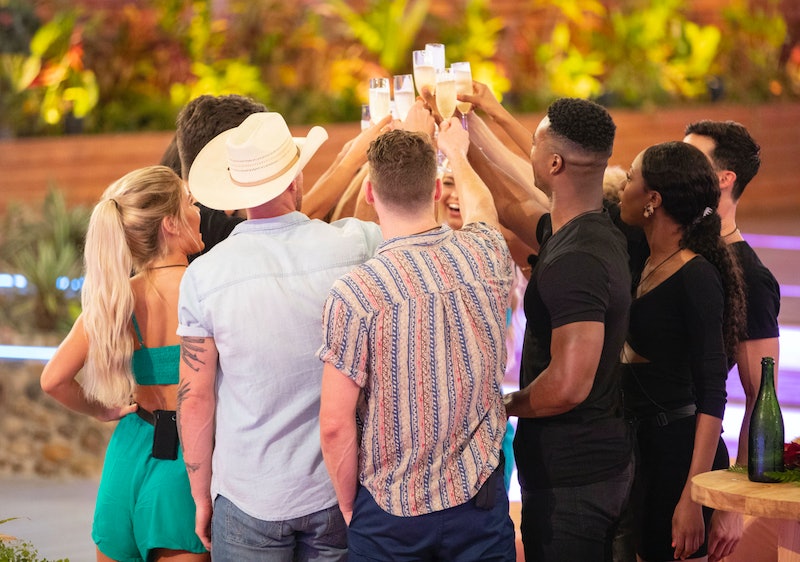 Get ready for some conscious recoupling on Love Island U.S. But exactly when are the recoupling ceremonies on Love Island U.S., you ask? Well, host Arielle Vandenberg may have said it best when she, uh, borrowed a tagline that Big Brother fans will recognize: "Expect the unexpected." As those who tuned into the July 9 premiere of the network's new reality dating series are now well aware, it's all about the suspense and cliffhangers. And the recoupling ceremonies may just come out of nowhere.

Or producers could even pull a fakeout when you are expecting them. Just as Kyra — the one "single" on the island at this point — was about to reveal whom she'd chosen to couple with, the Love Island narrator jumped in, teasing viewers, "You didn't think you'd find out that easily, did you?" He then added instructions to tune in tomorrow night to find out Kyra's choice. (After all, Love Island will air five nights a week on CBS.)

As seen in the end-of-episode preview for the July 10 installment of Love Island, the recoupling ceremonies are what really kick the drama into high gear, so the more the gorgeous, swimsuit-clad Islanders (and fans at home, by default) are caught off guard, the better, right?

And the couplings are very important. Love Island is basically a big game of relationship musical chairs, and whenever an Islander finds him or herself without a partner, they risk being dumped from the island, too. (And this season is filmed in Fiji, so, romance aside, that's some serious paradise lost.)

As of episode 1, Kyra may be the only Islander throwing off the male-female balance, but every few days, more super sexy singles will be arriving at the villa to really mix things up and test bonds. Yes, even after two days in Fiji, bonds have been formed and some of the competitors are already falling for each other fast. (Looking at you, Caro.)

Even so, some Islanders have their eyes on the (cash) prize, instead of a love connection — and their matchups are all about strategy. Contestants who want to stay in the villa "will do whatever it takes to hang in there including coupling up with someone they don't like," CBS explained.

But America will be watching — like, all the time. (No, really: Love Island contestants are filmed 24/7.) And viewers also get a say in who stays and who goes from the Fiji island paradise. Although the opportunity didn't arise in the first episode, fans will eventually be able to cast their votes via the Love Island app. Its description reads, in part:

"Flex those fingers and tell us who's hot and who's not or which couples should getting to know each other. Plus exercise your right to vote! You can turn up the heat for our Islanders and really stir things up by deciding who stays and who deserves to be dumped from the show for good."

Even though Love Island's recoupling ceremonies — along with everything else, basically — don't follow a uniform schedule, their spur-of-the-moment nature will certainly give viewers plenty of suspenseful moments to keep them coming back for more. Let the coupling, uncoupling, and recoupling begin!

More like this
Everything We Could Expect In Gabby & Rachel’s Season Of The Bachelorette
By Kadin Burnett
The 'Love Island' Contestants *Do* Know Who Gemma's Dad Is, After All
By Bustle UK
Everything We Know About Gemma & Jacques’ Relationship – & Break-Up
By Frances Stewart
Twitter Has *Many* Thoughts On Amber & Ikenna’s Dumping From ‘Love Island’
By Frances Stewart
Get Even More From Bustle — Sign Up For The Newsletter