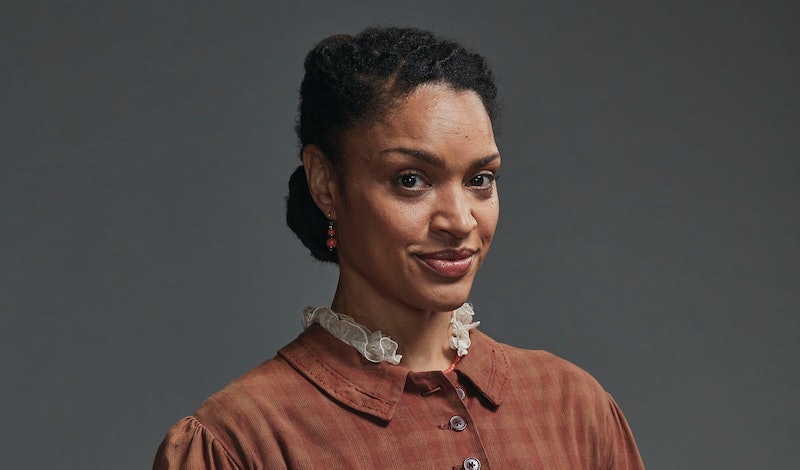 The fifth and final series of the hit BBC drama Poldark is arriving this weekend, and once again our Sunday TV lineup is complete. Viewers can prepare to be transported back to the 18th century as Aidan Turner reprises his role as Captain Ross Vennor Poldark for a whole new adventure — and some of the cast appearing alongside the series-lead include the likes of Eleanor Tomlinson as Demelza Poldark, Sean Gilder as Tholly Tregirls, and Kerri McLean, who joins the cast as Kitty Despard. But who is Kerri McLean? Here's everything you need to know about the Poldark newcomer.

According to her official portfolio, Kerri McLean is a British actor who currently resides in London. McLean graduated from the Josiah Mason College in Birmingham with A-Levels in Performing Arts, Media Studies and Art back in 1998, before moving onto study Modern Drama Studies at Brunel University in London. Eight years after earning her degree, McLean began studying Audio Production at the University of Westminster, from where she graduated with a Masters Degree in 2009.

The Poldark star has previously appeared in various hit soap operas, including Eastenders, Holby City, and Doctors — and more recently, McLean has starred in Sky's A Discovery of Witches, the award-winning BBC drama Bodyguard, and according to the Radio Times, the Channel 4 sci-fi series Electric Dreams.

As mentioned previously, Kerri McLean will join the cast of Poldark's fifth and final series, and according to the BBC, she will portray a strong-willed former slave known as Catherine "Kitty" Despard. During an interview with the broadcaster, McLean revealed that her Poldark character is based on a real historic figure, and said it was "a real honour" to take on the role. Speaking to the BBC, she said, "she is one of those unheard voices of history. Period drama has traditionally not shown black characters and so it is a real honour to play her and I have felt a responsibility to do a good job. I am proud and feel enormously lucky to have been given this role."

According to the BBC, the final series of Poldark will get underway at 9 p.m. on Sunday, July 14 on BBC One, and a short synopsis of the first episode reads, "The Poldarks' peaceful lives are disrupted when an old friend’s plea leads them into a world of duplicity." Unfortunately, the period drama is currently not available to watch on BBC iPlayer, however, if you are looking to catch up before series five kicks off, you can find the first three seasons of Poldark on Netflix. You're welcome.