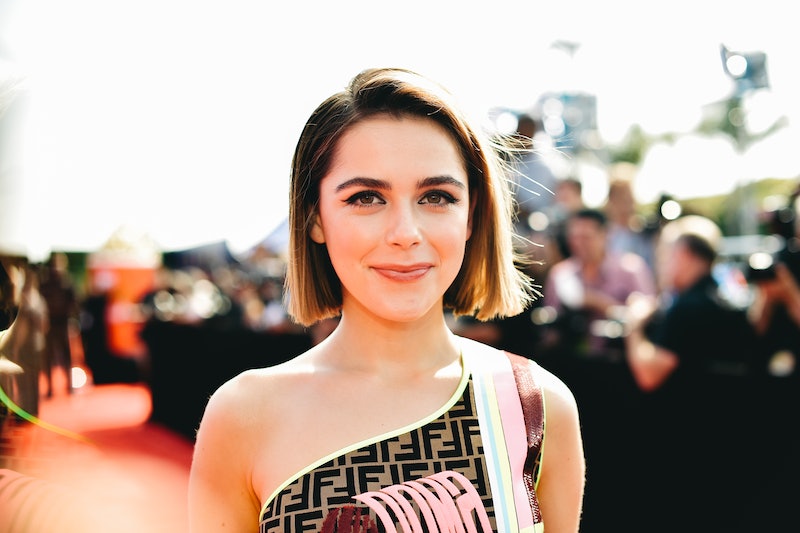 Potions and hexes aside, one of the big draws of Chilling Adventures of Sabrina is the angsty love triangle between Sabrina, the human descended-from-witch hunters Harvey Kinkle, and the warlock Nicholas Scratch. At the 2019 MTV Movie and TV Awards, Shipka took to the stage with costars Ross Lynch and Gavin Leatherwood and traded playful barbs about who was the better kisser, further fanning the flames of #TeamHarvey versus #TeamNick. (According to Shipka, the winner is Ross, who plays Sabrina's first love Harvey; sorry, Nick fans!) With Shipka busy playing a heroine who has to juggle her love life with saving the world, you might be asking if she has any time for some romance of her own. If you're wondering if Kiernan Shipka is single in 2019, rumors say no — but who she's dating may surprise you.

Shipka's impressive resume has kept her pretty busy from the get-go. She first rose to prominence in Mad Men, where she played Jon Hamm's rebellious daughter Sally Draper. She then did some voice acting (Legend of Korra, When Marnie Was There, and Marvel Avengers Academy) before landing the role of the witchy star of Chilling Adventures of Sabrina. It's a role that rocketed her to stardom, but also one that seems to take up most of her personal time.

Back in November, Shipka hinted to Seventeen that her demanding Chilling Adventures of Sabrina schedule made it pretty hard to date at all. "I’ll wrap on Saturday at 6 a.m., so I’m pretty much useless on Saturday. And then Sunday, I have to get all my stuff done for Monday," said Shipka. "Occasionally, the cast can drive me out for a fun time, but work is my number one priority right now."

Many fans had been hoping that Shipka was dating either Lynch or Leatherwood on the DL, since most of her time is spent on set, and presumably often with one or both of them. It's not unheard of for actors who play love interests to start dating, so it's unsurprising fans have been keeping an eye out for any hints.

But fans will have to hang up their shipper hats, because Shipka's rumored boyfriend isn't a Chilling Adventures of Sabrina cast mate at all. (And in fact Lynch is rumored to be dating Ros' actor, Jaz Sinclair!) Since her November Seventeen interview, Shipka has been spotted around town with the 20-year-old Charlie Oldman, the son of actor Gary Oldman (Sirius Black in the Harry Potter franchise and Lieutenant James Gordon in The Dark Knight).

Unlike his father, Oldman hasn't caught the acting bug though. He's actually an up-and-coming model, and he first took to the catwalk in 2015 at the Saint Laurent show during Paris Men's Fashion Week. Since then, he's strutted in the Dolce & Gabbana Fall/Winter 2108-2019 show in Milan. He also seems to enjoy touring with and photographing pop singer Goody Grace and lead singer of The Neigbourhood Jesse Rutherford.

In March, E! News reported that Shipka and Oldman were spotted having dinner and looking cosy together, and in April they attended Coachella together with friends. They also attended the premiere of the documentary Be Natural: The Untold Story of Alice Guy-Blache in April. The day before they were seen in public, Oldman posted a picture of the two of them together with a simple heart emoji caption, leaving many fans to surmise that the two were in fact dating, and simply keeping it low key.

Shipka herself has neither confirmed nor denied anything, and her own Instagram is pretty professional, mostly capturing candid moments between her and her Chilling Adventures of Sabrina cast and crew. As a young actor very much in the public eye, it's understandable that Shipka wants to keep her private life exactly that. Whether or not she's dating Oldman, it's clear Shipka is dedicated to her craft, which is reward enough for fans.