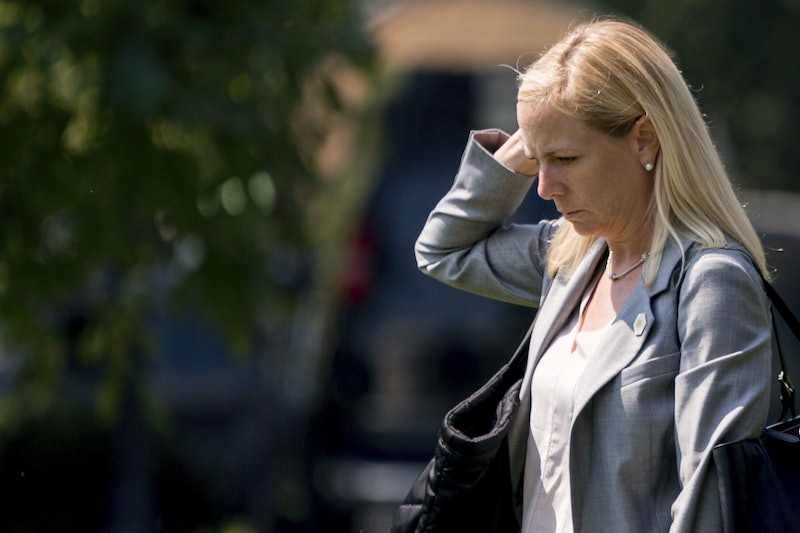 In late July, President Trump elevated former General John Kelly to be his White House chief of staff. Kelly had previously been secretary of homeland security for the first six months of the Trump administration, and his elevation to the White House position left the Department of Homeland Security without a leader. On Wednesday, after more than two months of vacancy, Trump tapped Kirstjen Nielsen to be the new DHS secretary.

Nielsen was Kelly's chief of staff while he served as secretary of homeland security, meaning that she had experience with much of the day-to-day operations of the agency while she served under its previous occupant. She followed Kelly to the White House when he left DHS, serving as a deputy chief of staff. According to the Wall Street Journal, it was Nielsen's closeness with Kelly, who has been working to exert tighter control of the White House staff since he entered the role, that helped her get the job.

A graduate of Georgetown School of Foreign Service and the University of Virginia Law School, before working in the Trump administration, Nielsen had experience at the Transportation Security Administration under President George W. Bush, and she served on his Homeland Security Council. During the Obama years, she spent time in the private sector, working in national security policy for the consulting firm Civitas Group and then founding Sunesis Consulting. She also spent time at the Center for Cyber and Homeland Security at George Washington University and the National Cybersecurity Center, and is regarded as a cybersecurity expert.

The statement by the White House announcing Nielsen's new position noted that she is the first former employee of the department to have been nominated to lead it, as the relatively new Department of Homeland Security has been until now usually run by former politicians or former military leaders, as well as some government lawyers.

During the time between Kelly's exit at Homeland Security and the nomination of his former chief of staff, the department had been run by Elaine Duke, who had been nominated as Deputy Secretary of Homeland Security in April. Duke's two-month tenure without an official nominee was marked by a series of crises facing the department, with three back-to-back hurricanes that inflicted heavy damage to parts of Texas, Florida, and Puerto Rico, and wildfires affecting much of the Western United States. Duke was criticized during the Puerto Rico response for referring to the recovery efforts as a "good news story."

A New York Times report on the early days of Kelly's tenure as White House chief of staff singled out Nielsen as a tough enforcer of discipline while she served as his deputy. Nielsen was described by the Times as "brusque, no-nonsense" and "willing to be hated," as she served as a gatekeeper for an often-chaotic White House that had previously been defined by disorganization before she and Kelly were brought in.

The Department of Homeland Security not only handles agencies like FEMA and cybersecurity, which have risen to high prominence in the early months of the Trump administration due to the repeated national disasters as well as the fallout from alleged Russian hacking during the 2016 election, but also immigration, an area of policy that has been of special concern to President Trump.

With Trump working to secure funding for the border wall he promised during the campaign, as well as trying to crack down on sanctuary cities and perhaps trying to protect the legal status of Dreamer immigrants brought to the United States as children, there will likely be many areas of policy that will come across Nielsen's desk.