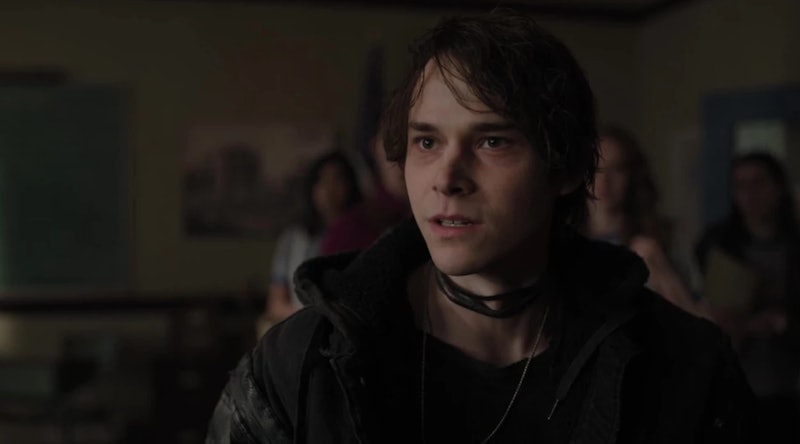 Just as one threat is defeated, another one pops up. Kurtz on Riverdale is bad news for Jughead et al, and it seems he's only just beginning his reign of terror against the Serpents and their friends. He and his Gargoyle Gang seemed perfectly content to play G&G in their abandoned house by themselves, but the Serpents have stirred them to action.

First, Jughead went to Kurtz to merge their gangs with the promise of immunity for the Gargoyles — but he quickly realized it was a bad idea based on how intensely they were playing G&G and how seriously they took the idea of "ascension." Despite her son's wishes, Jughead's mom, Gladys, took things into her own hands and recruited the Gargoyles anyway because she felt it was important the Serpents upped their depleting numbers, no matter who was filling the space. However, Kurtz soon made it clear that the Serpents would have been better off faring for themselves.

Kurtz and his gang have no respect for the laws of the Serpents and, since they've been promised immunity, they don't have much respect for Riverdale's laws either. They literally tried to kill Fangs by dropping him off a balcony. "I play by a different set of rules," Kurtz defiantly told Jughead when he tried to make them say that "in unity there is strength." When Jughead pressed back, Kurtz reminded him that the Serpents' numbers are down. "You need us more than we need you," he said.

Eventually Sheriff FP Jones got involved and recruited the Serpents/Gargoyles to be his deputies. Uninterested in that path, Kurtz walked away — presumably for good. But nothing ends that easily on Riverdale. To start, some fans believe Kurtz isn't who he says he is. There's a very compelling theory floating around that Kurtz is actually Charles Smith — aka FP and Alice's real son (since Chic was an imposter.)

As Leah Thomas wrote last week for Bustle, Kurtz's obsession with the Gargoyle King may be born from seeing the King statue at the Sisters of Quiet Mercy, where Charles was raised after Alice gave him up. The timeline doesn't totally check out (Kurtz seems younger than Charles would be), but we shouldn't put it past Riverdale to pull out a twist like that. After all, Kurtz seemed very unwilling to work for FP, maybe for a deeper reason than just because he's a troublemaker?

It's not known how long Kurtz will be sticking around in the town. IMDb just has him listed for the two episodes he's already appeared in, and he wasn't featured in the promo for the March 13 episode. That promo teased that most of the drama will be centered on Gladys and FP's potential relationship, as well as Archie fighting more people (of course). But Redditor LthePerry02 pointed out that the actor who plays Kurtz, Jonathan Whitesell, was posting Instagram stories while in his Kurtz costume just a few days ago. So even if he's not in the next episode, he's seemingly going to be in a future one.

His story definitely felt unresolved as of the last episode. Jughead and FP may think they drove him away, but he'll likely be back — and when he is, the Jones family will need to watch their backs.