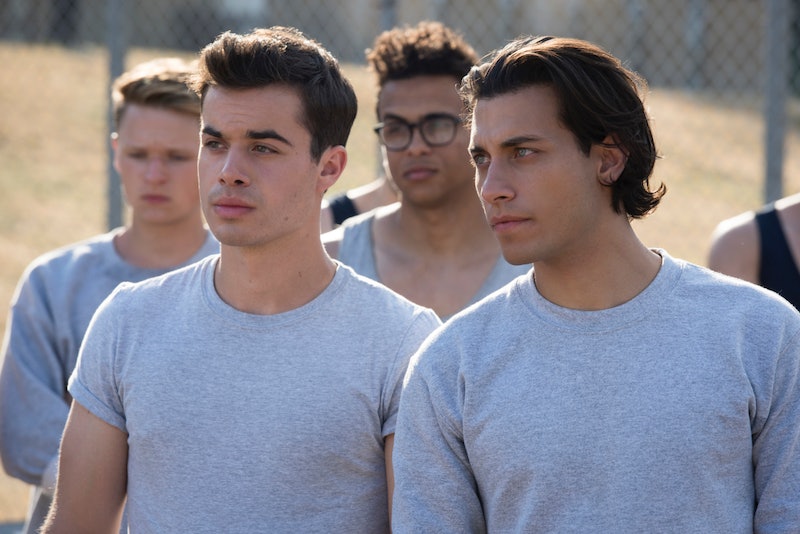 Spoilers ahead for Riverdale Season 3, Episode 6. As if Riverdale wasn't already full of a ton of gangs, it's time to add one more to the list. The Nov. 28 episode introduced Riverdale's Gargoyle Gang, a flock of masked, Gargoyle King-worshipping followers Jughead stumbles upon in the forest. As Jughead explains, he saw "like 10 of them" that "had on these masks, like they were a gang. A gang of gargoyles" — hence, the Gargoyle Gang. What a creative name!

Now, this new gang joins two others that already exist on the show: the Southside Serpents and the Ghoulies, who are already at war, and honestly don't need another gang further complicating things. That's not to mention the now-defunct Red Circle and Dark Circle gangs that Archie once started. Riverdale definitely has a growing gang problem, and this latest group once again spells trouble for your fave townies. The Gargoyle King was already terrifying enough without a legion of creepy followers doing his bidding, so everyone needs to watch the eff out.

As far as who could possibly be behind those scary masks, we do know that former Southside Serpent Joaquin was one of the new Gargoyle Gang members. He left juvi and the Serpents to join the new gang, but he's also since been killed. That leaves about nine other gang members of unknown identity. Who they are depends on who the Gargoyle King is.

For example, if FP Jones is the King, then the Gargoyles are likely Serpents who still have loyalty to their former Serpent King. If the Gargoyle King is Penny Peabody, the gang is likely made up of her Ghoulies. If Hiram Lodge is the King, expect a random assortment of former juvi prisoners that he's intimidated and prison guards that he's paid off. If Alice Cooper or Edgar Evernever are the King, the followers are likely from The Farm. And so on.

But creator Roberto Aguirre-Sacasa did tell Us Weekly that the Gargoyle King is is "most probably a guy in a mask" and is also "probably" someone fans have already met. Unfortunately that "probably" doesn't narrow it down that much, which also makes it hard to narrow down who could be hiding behind all of those masks.

Regardless of who populates the scary new gang, though, they're definitely not friendly. The Gargoyle King has already claimed the lives of many through the Griffins and Gargoyles game and it's likely that his league of followers helped carry out those fatal acts that the coroner called "true evil" incarnate. Aguirre-Sacasa has also called the Gargoyle King, "gruesome, gory, grim, and gnarly," on Twitter, which aside from being fun alliteration, is a sign that his pack of helpers is equally as bad.

So whenever those masks are ripped off, and whoever is behind them, the Riverdale crew better watch out — because anyone who's in a gang to worship the "gruesome, gory, grim, and gnarly" Gargoyle King is someone to stay away from.