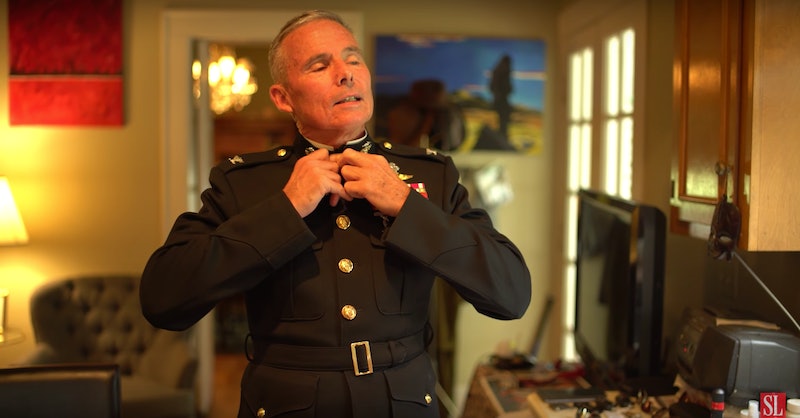 Alabama is weeks away from electing its next senator, and Democrat Doug Jones is currently neck-and-neck with Republican Roy Moore in the polls. But on Monday, a new contestant entered the ring: A retired U.S. Marine announced that he's launching a write-in campaign for Alabama's Senate seat. Lee Busby, who also previously served as a top aide to White House Chief of Staff John Kelly, said that he'll run as an independent, as he doesn't think Jones or Moore are "qualified to be in the U.S. Senate."

“I think you can flip this thing," Busby told the Washington Post. "If this were a military operation, the left flank and the right flank are heavily guarded,” Busby said. “I think that gives you an opportunity to run straight up the middle.”

By all indications, however, Busby isn't running a centrist campaign, as his stated policy positions are more or less in lockstep with that of the national Republican Party. A Trump voter, Busby told the Post that he wants Obamacare repealed, supports the GOP's efforts to reduce taxes, and opposes abortion except in cases of rape or incest.

“The people of Alabama are not going to be represented by someone who supports a liberal abortion policy,” Busby told the Post. “I’m extremely concerned about the Democratic Party in Alabama. I don’t think they reflect Alabama’s views.”

During his time in the military, Busby served as an officer in Iraq and later as vice chief of staff to Kelly, who was then was a three-star lieutenant general in command of the Marine Forces Reserve. He also worked at the defense contractor DynCorp, training soldiers in Afghanistan, before retiring from the Marine Corps in 2013. He's spent the last few years sculpting busts of military veterans.

Moore, a former judge, held a steady lead over Jones for the majority of the race. However, the election was rocked by allegations that Moore, during his time as an assistant district attorney, initiated sexual contact with a 14-year-old. Moore denied that accusation, and said in a subsequent interview that he "generally" hasn't dated underage girls as an adult, but six more women later came forward to accuse him of sexual misconduct. The GOP's Senate fundraising operation cut ties with Moore, and several Republican Senators called on him to withdraw from the race. Again, Moore has denied any wrongdoing.

Since then, Moore's support has cratered in the polls. According to RealClearPolitics' polling average, Jones now leads Moore by an average of just .8 percent, and FiveThirtyEight concluded on Tuesday that the allegations have "severely diminished" Moore's chances of winning.

Busby told the Daily Beast that although he hasn't decided whether or not he believes Moore's accusers, the candidates' judicial record is itself disqualifying. “I have no idea if the allegations against him true or not, but I don’t see anything within his experience as a judge that qualifies him for the job," Busby said.

Moore was removed from the Alabama Supreme Court in 2003 by the state's ethics panel after he refused to obey a federal court order to relocate a monument of the 10 Commandments. He ran for his old seat and won in 2012, but was suspended by the same ethics panel in 2016 when, in defiance of the U.S. Supreme Court, he ordered probate judges not to issue marriage licenses to same-sex couples.

While it's too soon to say whether Busby's candidacy will have a meaningful impact on the election, that's certainly a possibility: In a Raycom Media poll taken a week before Busby declared his candidacy, three percent of Alabama voters said they planned to vote for a write-in candidate. That's not much — but it's more than enough to tip the results in a close Senate race.