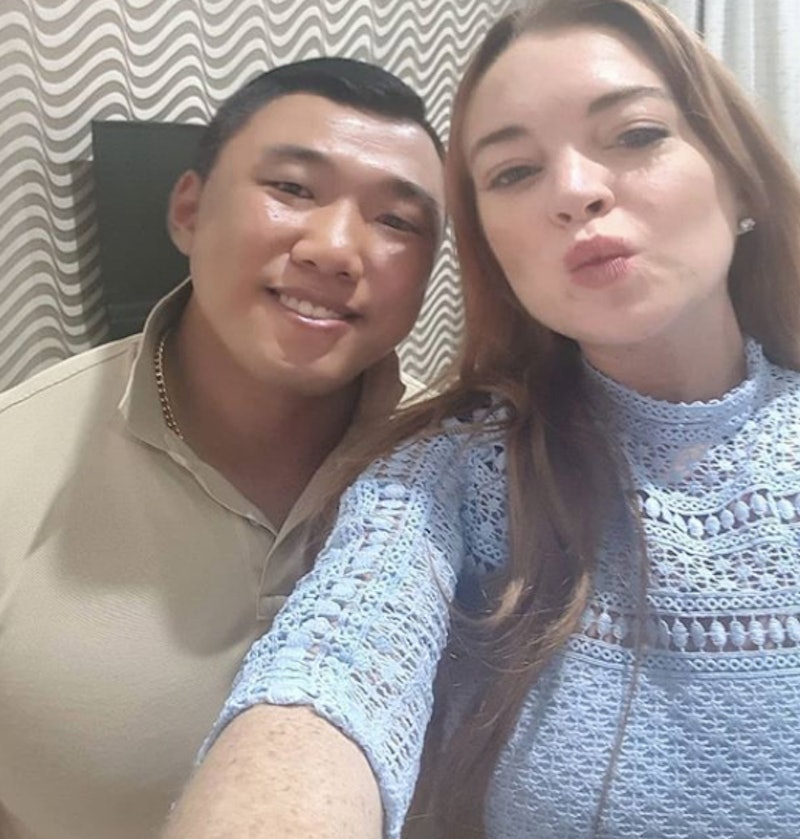 LiLo's been out of the news for awhile — until now. Lindsay Lohan and Korean bodybuilder Je-yong Ha are making headlines, because they've been rumored to be dating, as first reported by weightlifting site Liftn on Monday. However, that isn't the case. Lohan's manager, Scott Carlsen, tells Bustle, "She is not dating Je-yong Ha. They are only friends."

So, the 31-year-old actor isn't dating Ha, who refers to himself as the "Korean Hulk", per his Instagram handle. It appears Liftn initially made the connection between Lohan and the bodybuilder based on his Instagram. He has shared a lot of photos and videos of them together, which has seemed to cause the romantic speculation revolving around them.

It's not entirely clear how they met, but according to Vulture, it appears Lohan and Ha first connected in Mykonos, Greece in August. Thanks to an investigation performed by the publication, the Parent Trap star vacationed in Greece starting in late June and then first appeared in an Aug. 11 Instagram from Ha. Apparently, they also spent time together in Dubai on Oct. 5, based on a Facebook photo shared by Ha. The latest social media footage of them together is an Instagram posted by Ha on Oct. 21. Lohan has never posted any photos or videos with Ha on her social media accounts.

According to Ha's Facebook, he is originally from Seoul, Korea and currently lives in Moscow, Russia (Lohan has many ties to Russia, including her former fiancé Egor Tarabasov.). The Korean News System reports (via Vulture) that Ha has competed in arm-wrestling competitions, including powerlifting, and that he won an October bench-pressing competition in Korea, where he lifted 200 kg. Vulture also reports that Ha "...shills for a company called Mate M Box, which is basically a private karaoke room set up like a recording studio..." and participates in promotional events by arm wrestling customers. Per Vulture, "If they beat him, they get a little under $1,000."

An Oct. 19 YouTube video from the Korean Armwrestling Federation lists Ha as 20 and ranked ninth in the country for his arm-wrestling talents. As broken down by Vulture, "He weighs 110 kg (242.5 pounds), stands 165 cm (five-foot-four), with biceps 56 cm (22 inches) in girth." He's definitely a muscular guy who doesn't look like he should be messed with.

He also may or may not be a billionaire, but based on his style of living that he puts on Instagram it sure seems like he has money. If you scroll through his IG, you'll quickly notice it looks like he enjoys the luxurious life. From riding on private planes to posing with fancy cars to eating truffles and caviar to enjoying "golden sponge cake", Ha has apparently experienced it all. As for his friendship with Lohan, well, they've seemed to have had quite the journey. Here just a few photos Ha has so kindly captured and shared with the world.

You can't go out and not get a selfie, right?

LiLo As A Bee

When in doubt, use a filter.

A Little Dinner Together

Just another photo where it looks kind of distorted.

"You Can Sit With Us"

Posing For The Camera

They love a good selfie.

A Kissy Face Is Necessary

They apparently are "always good".

There you have it. Lohan and Ha "are only friends", who supposedly had the time of their lives in Mykonos and Dubai. Who knows if they'll ever end up in the same city or country again, but, if they do, you can be sure Ha will most likely share their next encounter on social media.