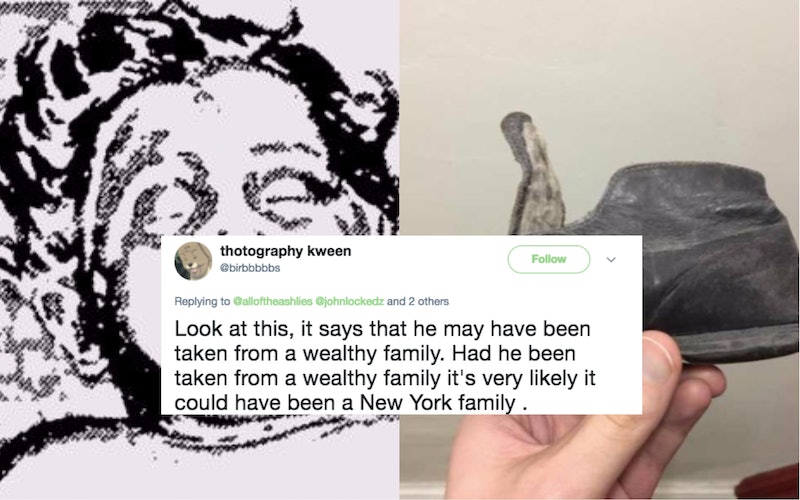 There’s a lot we don’t know about the Little Lord Fauntleroy murder, but here’s what we do know:

On March 8, 1921, a terrible discovery was made near what was then called the O'Laughlin Quarry in Waukesha, Wisconsin: The body of a small boy floated in a nearby pond. Estimated to be between around 5 and 7 years old, the boy was white, about three feet and six inches tall, and blond haired and brown eyed. He wore good quality clothing; he had been clad in a blouse or button-up shirt, a gray sweater from the Bradley Knitting Company, underwear, black stockings, and patent leather shoes.

No one knew who he was.

Because of his clothing, he became known as Little Lord Fauntleroy — a nod to the Frances Hodgson Burnett novel of the same name — and he’s still known as that today: His murder has never been solved, and no one ever stepped forward to claim him. Although he was eventually interred in the Prairie Home Cemetery in Waukesha, his headstone bears no name; it reads only, “Unknown Boy Found In O’Laughlin Quarry, Waukesha, Wis. March 8, 1921.”

Although initially it was believed that the boy had drowned, the coroner’s examination revealed that he had been struck on the head with a blunt object; what’s more, there wasn’t nearly enough water in his lungs for his death to have occurred by drowning. Indeed, notes The Line-Up, he may have been killed first, then thrown into the pond afterwards. He may also have been in the pond for several months before being discovered. It’s possible that he had been kidnapped from a wealthy family who lived elsewhere and killed after a failed attempt at extortion — an idea that we’ll talk about a little more in just a bit — but that theory has never been substantiated.

Beyond that, though, everything else the investigation dug up turned up to be dead ends. According to the Doe Network’s page on the case, an employee of the quarry said that about five weeks before Fauntleroy’s discovery, a man and a woman arrived at the employee by car, got out, and asked if anyone had seen a small boy; the woman, who was wearing a red coat, appeared to be visibly upset. However, the couple was never located — and although police later received a tip that the woman had died by suicide in the pond where the boy was found, according to The Line-Up, efforts to drag the pond for remains came up empty.

Additionally, the owner of a local department store claimed that the boy’s clothing had been purchased at his store a few months prior, although there was no way to determine who had purchased them; and later, a man in Chicago claimed the boy to be his nephew who had been kidnapped by his sister’s ex-husband. Neither lead came to anything, and an identification was never made. Not even the offer of a reward — first $250, then $1,000 (about $13,478.85 in today’s currency) — led to any useful information.

A local woman named Minnie Conrad took it upon herself to spearhead a fundraising effort to give the boy a funeral, and on March 14, 1921, he was buried in a white casket in the Prairie Home Cemetery. “Who that boy was, who were his parents, what joy, if any, there was at his birth, what gifts were showered upon him or his mother, no one knew,” read a newspaper article commemorating the funeral published in the Waukesha Freeman on March 17, 1921. “Somewhere, some place, perhaps, is the mother and some other place, perhaps is the father. No one envies them the burden lying upon their conscience. Public spirited and kind-hearted people — men of low and high [unintelligible] and even poor working girls out of work generously contributed to the fund that made the simple funeral possible.”

Conrad laid a bouquet at the boy's grave every year until her death.

In 1949, a Milwaukee medical examiner put forth a new theory about Little Lord Fauntleroy’s identity: That he was Homer Lemay, a six-year-old boy from Milwaukee who had disappeared around the same time that Little Lord Fauntleroy was discovered. According to Edmond Lemay — Homer’s father — Homer’s mother had died of tuberculosis in 1919, after which the boy had been left with a couple called Norton. Lemay said the Nortons had taken Homer on a trip to South America, where he had died in a car crash — something which Lemay said he only found out about via a newspaper article. However, no record of the death was ever uncovered; what’s more, police investigators never turned up any evidence that the Nortons existed in the first place.

Could the little boy found floating in the pond have been Homer Lemay? Perhaps killed by his father? We still don’t know, and we likely never will. It was suggested in 1949 that the body of Little Lord Fauntleroy be exhumed for further examination, but this suggestion was shot down and he was left in peace. Some folks, though, remain thoroughly convinced that Fauntleroy was actually Homer Lemay.

For the curious, this is Homer:

So: How does all of this connect to Dear David? To behonest, I find the link somewhat tenuous; although Twitter user @johnlockedz pointed in a follow-up tweet to “the blond hair, the leather shoes, the blow to the head” as eerie similarities, I find them too vague to be convince. First off, we've never received any information about David’s hair color; what’s more, Adam Ellis had previously written that David had told him in a dream that he had died after a shelf in a store fell on him — which isn’t at all the same thing as being struck on the head with a blunt object, as it appears to have happened to Fauntleroy. Yes, both incidents would have resulted in a dented head; and yes, David said that the shelf had been pushed (that is, it hadn't simply fallen on its own); but the damage caused by, say, someone swinging a baseball bat at your head versus having something huge fall on you would likely be quite different. I don’t think this particular link is strong enough to say for sure that Fauntleroy is David.

What’s more, other Twitter users pointed out one very important fact: That the boy called Fauntleroy was found in Wisconsin, while Dear David’s activity has been occurring in New York. This doesn’t mean that it’s impossible that David could be Fauntleroy; as Twitter user @birbbbbbs observed in another response, “Look at this, it says that he may have been taken from a wealthy family. Had he been taken from a wealthy family it's very likely it could have been a New York family.” However, I’d argue that that, too, is a pretty big leap to make. Although it’s certainly a possibility, I don’t necessarily think it’s very likely that Fauntleroy could have been from New York — after all, the United States is a big place, and even in 1921, wealthy people came from a wide variety of locations. Consider, for example, two actual leads from the case: One of them linked the case to Chicago, while the other linked it to Milwaukee — both large cities who had their share of wealthy citizens, and both of which are a heck of a lot closer to Waukesha than New York is.

And as for the shoe? Well, without knowing anymore about the shoe, we can’t say much about it — but for what it's worth, the one Ellis found doesn’t look like it’s patent leather to me. Patent leather — which is what Little Lord Fauntleroy’s shoes were made of — is known for its high-shine, glossy finish, and even allowing for it getting scuffed with age… well, the shoe Ellis found just looks like regular leather to me.

That’s conjecture on my part, though, so it’s always possible that I’m wrong.

In the meantime, here’s hoping we do eventually get to the bottom of Dear David.