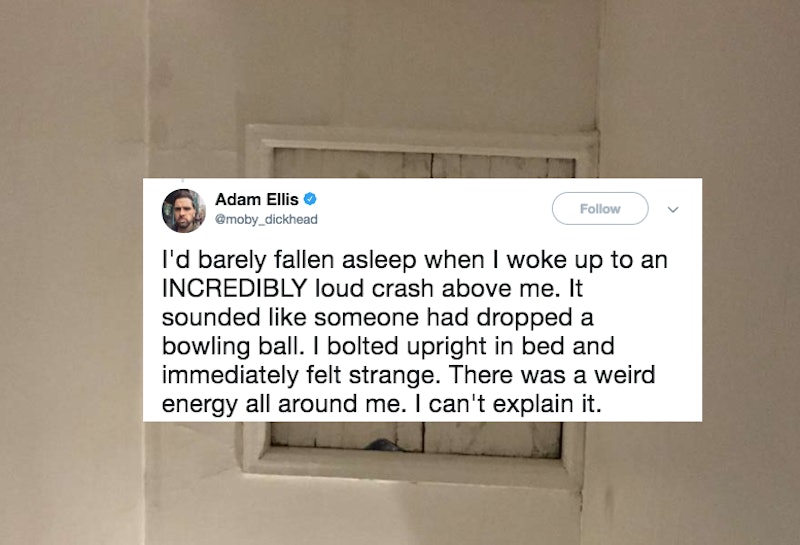 So, hey, remember that hatch in the ceiling that Adam Ellis of “Dear David” fame found according to his last Twitter thread about the story? Well, guess what? In the latest “Dear David” update, Ellis opened the hatch. And, uh… what he found was… shall we say, not encouraging when it comes to his continued safety and/or imminent demise at the hands of a vengeful child ghost.

OK, technically, he didn’t fully open the hatch; nor did he go up inside it and explore the crawlspace in full. He did, however, open it a crack with the help of the telescoping pole he had previously ordered, as well as call his landlord to take a closer look at everything — which, honestly, I would argue is what he should have done the moment he discovered the hatch in the first place, but whatever. I’m not living there, so it’s easy for me to say that sitting here from my comfortable, thoroughly-unhaunted apartment many states away.

In any event, the new thread, which Ellis started tweeting at 10:18 p.m. the evening of Tuesday, Nov. 28, begins, “A lot has happened in the last week, but I was away for Thanksgiving so I’m just now able to write it all down.” According to Ellis, those noises coming from above his apartment haven’t abated at all; however, the telescoping pole he ordered after he initially found the hatch didn’t get delivered until after he had already left town, which meant that he wasn’t able to look further into the whole thing until after he got back. He arrived home on Friday night and made plans to poke around the hatch a bit on Saturday morning.

That night, he says, this happened:

After that, Ellis says the sounds stopped, and he fell back asleep. The next morning, however, he was on his way out the door to go get breakfast when he noticed something odd on the stairs under the hatch:

And when he looked up at the hatch itself, he noticed something even odder:

So, he went back into his apartment, grabbed the telescoping pole, and used it to open the hatch just a crack:

When Ellis picked up the object that fell from the hatch and examined it, he found it to be a small child’s shoe:

After making that discovery, he finally called his landlord, who brought a ladder and a flashlight, opened the hatch, and poked his head up through it to see what might be up there. At first, the landlord didn’t see anything — but then this happened:

That thing turned out to be a glass marble:

After his landlord left, Ellis says he did a little research to see what he could find out about the marble and learned something interesting about how glass marbles used to be made once upon a time:

He ends the thread with the following:

To which I can only say this:

ADAM. WHY ARE YOU KEEPING THEM IN YOUR HOME???

I mean, I understand not wanting to give them to a friend for safekeeping; doing so might put that friend in terrible danger. But, like…what about getting a safety deposit box or something? That way, you can keep them safe, but also keep yourself safe. Because keeping the belongings of a dead child whose ghost is already allegedly haunting your apartment directly in your home is a reeeeeeeally good way to make sure that David has ready access to you at all times — and more access than he's already had, at that. This is a basic lesson that every ghost story in existence teaches, so, uh… why are you ignoring it?

The answer, of course, is probably that the storyline demands he do so; if, as I suspect, the whole thing is a really well-executed piece of fiction, what needs to happen now is for the events to ramp up and for the stakes to rise. There’s no better way to do that than by bringing the belongings of the ghost that’s meant to be haunting you into your living space — so I would imagine that the next update will likely be a doozy.

By the way, my hunch for the timing of the hatch opening appears to have been correct; at the time of the last update, which occurred on Nov. 17, I estimated that it would probably be roughly a week and a half before we got a new one — and, lo and behold, Ellis’ continued adventures with the hatch picked up again on Nov. 28, just about a week and a half later. It’s true that this was at least partially due to the fact that Ellis was out of town for Thanksgiving — but I also don’t think it’s an accident or a coincidence that it was structured in this way. We’d pretty much stopped talking about the hatch by last night, which means it was time to bring something new into the mix to talk about all over again. My assumption is that, again, the next update will beabout a week and a half from now — probably sometime around Dec. 9 or 10...

...Unless, of course, the effects of keeping the marble and the shoe around increase the pace and move the timeline up a bit. That’s also a distinct possibility.

For what it’s worth, I do think that this part of the story, as interesting as it is, is also still pretty easy to fake. All you’d need to do is acquire those two objects, plant one of them in the appropriate location, and then use your camera to manufacture the act of “finding” it. If this is what’s going on, I do give Ellis credit for realism — because that whole thing about the bump on the marble? That’s absolutely true.

The bump is called a pontil — and it’s notable because it’s what separates a handmade glass marble from a machine-made one, according to antique marble collector Alan Basinet speaking with Collectors Weekly. Although marbles have existed since ancient times, they’ve been made throughout history primarily from ceramic or clay; glass marbles are much more recent. According to How Products Are Made, the marbelschere — marble scissors — were invented by an employee in a glass factory in Germany in 1846, thereby enabling the easy production of glass marbles. Here’s how the process worked:

“This tool resembled a pair of tongs with a small cup on one end and a slicing device on the other. A molten glass rod would be forcefully inserted into the cup, and the worker would then twist the cup, which would help form the sphere of the marble. Squeezing the tongs shut sliced off the rest of the glass. Such marbles can be identified by their pontil marks, the two tiny tags at each end of the sphere where the cooling glass was severed from the rest of the rod.”

Glass marbles made by machines, however, don’t have pontils; although the molten glass used to make them is still cut by a slicing device, the rest of the mechanized process smooths down the surfaces of the marbles in a way that’s not really doable when you’re making them by hand. You can check out how today’s glass marbles are made here:

So, yes: The marble Ellis found is likely pretty old — or it was handmade by someone recently who’s familiar with the pre-machine technique once used to make them.

Regardless, the implications made by the marble are interesting: It means that if the toy is meant to have belonged to David, then the incident that killed him is supposed to have happened much earlier than many of us have probably thought (and, indeed, might explain why Ellis wasn’t able to dig up anything of interest when he first started looking into Dear David’s origins way back over the summer).

Dating the marble as Ellis has sets up the possibility for David to have been a child living in New York around the turn of the century — and if he’s haunting Ellis’ apartment in the modern day? Well, that makes me curious about the history of the property itself. If David was supposedly killed by a shelf in a store falling on him, was the store originally located where Ellis’ apartment now is? Or, did he actually lived on the property, either in the building that’s currently there (remember, it was once a house that’s since been made into apartments), or in a building that once stood there and no longer does?

The plot, as it were, has thickened. And we’re definitely not done with it yet.