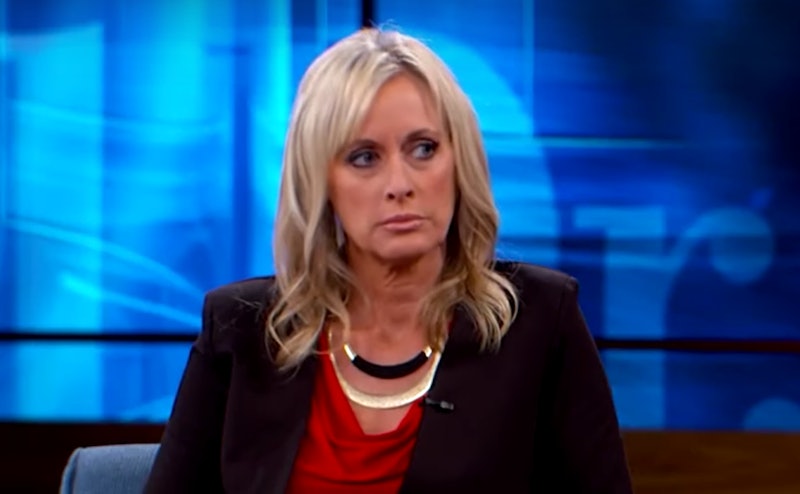 Though the bulk of Making A Murderer centers around Steven Avery's legal battle, it also covers some of his personal life. In Part 1, he was engaged to a woman named Sandy Greenman, but in the roughly three years since the show's release, he apparently moved on. After watching the series, Steven Avery's now ex-fiancée Lynn Hartman was so convinced he was telling the truth, she decided to reach out to him, and a romance blossomed from there. (Avery was convicted in 2007 for the 2005 murder of Teresa Halbach, but has long maintained his innocence.)

Sandra Greenman makes allegations about people that are not true. Read what the producers from Making a Murderer say about what Sandra Greenman [claims] they said about me. I can prove it is all lies to make me look bad so nobody will listen to what I have to say about Steven Avery. They did not want the letters Avery wrote to me, getting out. They did not want me to disclose what Avery said to me on the phone, and did not want me to prove that they are lying, and that I believe and know that, Steven Avery is a violent criminal who is right where he belongs.

I would like to add that I was fooled by MAM Season 1 , like many others, and felt very sorry for Steven Avery and genuinely wanted to help him, and was at a vulnerable time in my own life, which I believe was the perfect scenario for Avery as he is a predator for vulnerable women. I believed in him. After the Dr. Phil show, Avery was very insecure due to all of the reports back to him by Greenman and other supporters who wanted to see me gone. Sandra Greenman was green with jealously from the beginning. As a result, the true side of Steven Avery emerged and he showed me how unstable and violent he really is, so I broke it off with him immediately after that. I have the letters to prove it and I have letters that prove Avery was still [pursuing] me 2 months after I blocked his calls. I had to get a no contact order through the prison to keep him from contacting me anymore because I did not want to have anything to do with him after the frightening calls and letters which came after I refused to go see Avery after the Dr. Phil show.

EARLIER: Hartman told Dr. Phil in a 2017 interview that she started writing to Avery in prison, and the two soon struck up a long-distance relationship. "Within the first month, he was telling me that he knew he wanted me to be his wife," she explained. "I was excited. He had singled me out. It made me feel special. He told me I was beautiful."

Per a report from Inside Edition, the pair corresponded via letters and phone calls for eight months until they got engaged. Hartman told Dr. Phil she had been going through a divorce when she'd first written Avery, and that her ex-husband was a cop. Hartman also knows the criminal justice system pretty well, with Us Weekly reporting that she's a legal secretary.

According to photos posted by Avery's cousin Carla Chase on Twitter, Hartman visited Avery in prison in mid-September 2016. Shortly afterward, Avery's lawyer Kathleen Zellner confirmed the pair's engagement with a statement, also via Us Weekly. "Steven Avery's engagement to Lynn is one bright spot in an otherwise unbelievably tragic and unfair life story. Cheers to both of them," Zellner said.

Just a few days later, however, the pair split. Hartman told Dr. Phil that she ended their relationship on Oct. 1, 2016. But on Oct. 3, Zellner allegedly sent a letter to Hartman notifying her that Avery was ending the relationship. Per People, the letter was reportedly obtained by In Touch, but the page has since been taken down.

So, what changed so quickly? Not long before their split, Hartman was gushing to Dr. Phil about her first meeting with Avery, saying he looked "like the sweetest little teddy bear I’ve ever seen in my life." Avery also seemed to be smitten, telling Dr. Phil via phone, "I haven't been in love my whole life like how I felt about Lynn. Everything is all different with her."

In October 2016, Hartman told Inside Edition, "I had to end the relationship because I saw signs that concerned me." In February 2017, she opened up a bit more during an interview with In Touch, claiming that Avery was manipulative and that she became afraid of him. She alleged that after her Dr. Phil appearance, Avery got upset that she admitted she wasn't comfortable with the idea of living alone with him in the woods. In Touch also printed letters reportedly sent by Avery to Hartman, in which he allegedly threatened, "I don’t [want] to hurt you or the kids! So you have to promise me you will help us forever." (Bustle reached out to Avery's defense team regarding these allegations, but did not hear back before publication).

Hartman told the outlet that she now believes his murder conviction should be upheld. "I kick myself because I believed he was innocent," she said. "I truly loved him [and] was in denial. But I now believe Steven’s guilty of killing that girl."

Avery has a very different version of events about why they broke up. As reported by E! Online, Avery's friend and ex-fiancée Sandra Greenman issued a Facebook post, allegedly on behalf of Avery, to speak out against Hartman. Viewers first met Greenman on Part 1 of Making a Murderer and learned that the pair became engaged following Greenman's own letter-writing-turned-relationship story. And, although Greenman confirms to Bustle that she and Avery are not engaged any longer, she says, "We have a VERY strong bond and always will."

She also confirmed to Bustle that she made the claims in the below Facebook post, shared on Oct. 1 — the date that Hartman claimed she ended things. (Hartman's response to Greenman's allegations are shared in full above.)

Since their breakup, Hartman did those interviews with Inside Edition, In Touch, and issued a statement to Dr. Phil discussing her change of heart with Avery. She told Dr. Phil in her statement that she issued a no contact order to Avery's prison, so he's not permitted to call her or send any more letters.

After that, she's somewhat faded from the public eye, and presumably returned to her normal life. But Making a Murderer Part 2 could potentially explore more of her side of the story when it airs Oct. 19 on Netflix.