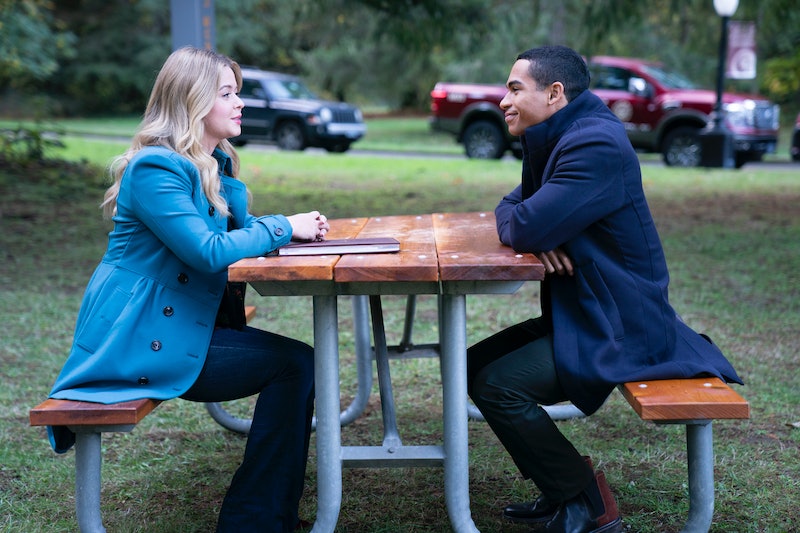 Every episode of PLL: The Perfectionists introduces some new shady aspect of Beacon Heights. Most recently it was Mason, Nolan's ex-best friend who joined The Perfectionists for Episode 2. Mason arrived during Nolan's funeral, where he was warmly welcomed by Nolan's mother. She revealed that Mason and Nolan were childhood friends, but had a falling out in the last year. Hmm... did this falling out lead to Mason pushing Nolan off a roof? Mason is incredibly sketchy, so I wouldn't put it past him.

"A smart and athletic fellow student at Beacon Heights University. Mason is a natural born leader who can charm his way in and out of most situations, but there is something about him that keeps people guessing."

Yeah, guessing that he killed Nolan. Anyway, Episode 2 revealed that Mason and Caitlin used to date, and he seems to still have feelings for her. He even offered to give her an alibi for Nolan's death if she needed one. What a gesture, huh? More likely, though, giving Caitlin an alibi would also give himself one — which he may well need if he was the one who killed Nolan. After all, Dylan thought he seemed a little too sad at the funeral, so perhaps Mason was acting to cast off suspicion.

There's certainly a reason to be suspicious of him. Mason has more than one motive to kill Nolan, and he conveniently showed up again after Nolan's death. As Lindsay Denninger pointed out in a previous Bustle article, perhaps Mason was jealous that Caitlin started dating Nolan. He wouldn't have known that it was a fake relationship. There's also the possibility that Mason killed Nolan because Mason was jealous of Nolan's success/popularity. When Mason talked to Caitlin at the wake, he was complaining about how Nolan was always "number one." Maybe Mason got tired of playing second fiddle?

A sneak peek from Episode 3 reveals that Mason shows up to Alison's class and promptly takes Nolan's now-empty seat next to Caitlin. Everyone is uncomfortable with that — especially Ava who is deep in mourning — but Mason makes no effort to move. "This seat is up for grabs now, right? I mean—" he says to Caitlin. Um, some childhood friend Mason is. Geez.

That line from Mason may not just be about Nolan's actual classroom seat, either. Now that Nolan is dead, it seems like Mason wants to slip into his spot physically and metaphorically. He already seems to be trying to potentially get Caitlin back, whom he thinks was really dating Nolan. (She's actually dating Jeremy; so good luck, Mason.)

Actor Noah Gray-Cabey (Code Black, Heroes) plays Mason on The Perfectionists, and IMDB has him slated to be in every episode from here on out. So fans will find out more about his sketchiness as the season unfolds, but don't be surprised if he's the one who pushed Nolan so he could have his time back in the spotlight. People in the Pretty Little Liars universe have killed for much less.