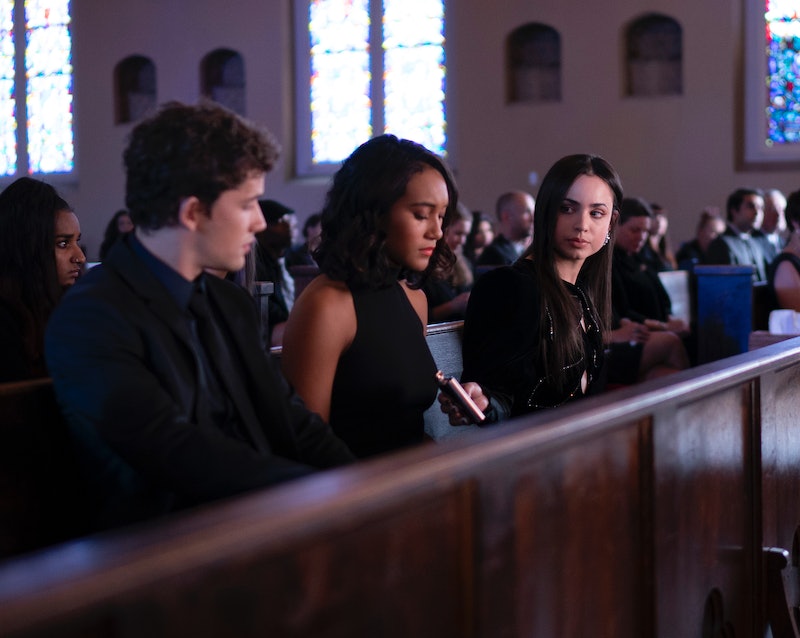 PLL: The Perfectionists, much like its predecessor, Pretty Little Liars, seems like it will have a high body count and an even higher list of suspects. With so many crappy people around, it’s not hard to imagine that someone (or, you know, like 30 people) would want them dead. Nolan Hotchkiss has gone to that big lacrosse field in the sky, and yet something is amiss — who is trying to frame Ali and the students on PLL: The Perfectionists? A friend from the past may have an axe to grind and revenge to seek out.

By all accounts, Nolan Hotchkiss was a real jerkhole, but because he had so many people in the palm of his hand, he is revered as a mighty son of Beacon Heights. It doesn’t hurt that he was extremely wealthy, extremely handsome, and that his sister allegedly took her own life, garnering him a huge dose of sympathy for the people that didn’t know him that well. But now, Nolan is dead, and not only did someone murder him, but that same person (probably) is blackmailing Ali, Mona, and Nolan’s friends — Ava, Caitlin, and Dylan. Ava was Nolan’s IRL girlfriend whom he cheated on. Caitlin was the fake girlfriend for public purposes. Dylan did Nolan’s homework and also, they made out sometimes. All three of these people wished for Nolan to die, but at Nolan’s funeral, one more suspect popped out — Nolan’s old friend Mason.

Nolan’s mother Claire was happy to see Mason at Nolan’s funeral, saying that even though Nolan and Mason weren’t close anymore, she was glad he came since he and Nolan were always and would always be friends. Mason didn’t look like he fit in with any particular group, but it was especially noticeable when he tried to hang with Dylan and Caitlin during the reception — this guy doesn’t fit in. Mason may have been on top once (and if he was Nolan’s BFF at one point, he definitely was), but right now, Mason is on the outside.

Why would that be? Well, at Nolan’s funeral, we also learn that Caitlin and Mason used to date and then Mason gave a whole speech about Nolan always being number one. The plot thickens — if Nolan forced Caitlin to date him, thereby ending her relationship with Mason, Mason would have every right to be mad. Also, when Dylan went to the greenhouse "where Nolan used to hide his pot" to find the stash of secrets he kept on them, someone had already beaten him to it. A former bestie would know where things are hidden, right?

We don’t know much about Mason yet, but Nolan’s pushing him away from Caitlin and off of what he could think is his rightful pedestal is a great motive for murder. And as far as targeting the people around Nolan, well, that’s just collateral damage — we saw it with Alex (aka Uber A) on Pretty Little Liars, and it definitely make sense now.

Again, it’s not clear if Mason is a computer genius or not to be able to send and delay texts and derail security systems — as a viewer, I assume that every millennial in the Pretty Little Liars universe has these skills. Only time will reveal who killed Nolan and who is terrorizing the rest of Beacon Heights, but since Noah Gray-Cabey, who plays Mason, is signed on for nearly every episode this season, there’s definitely more there than meets the eye.