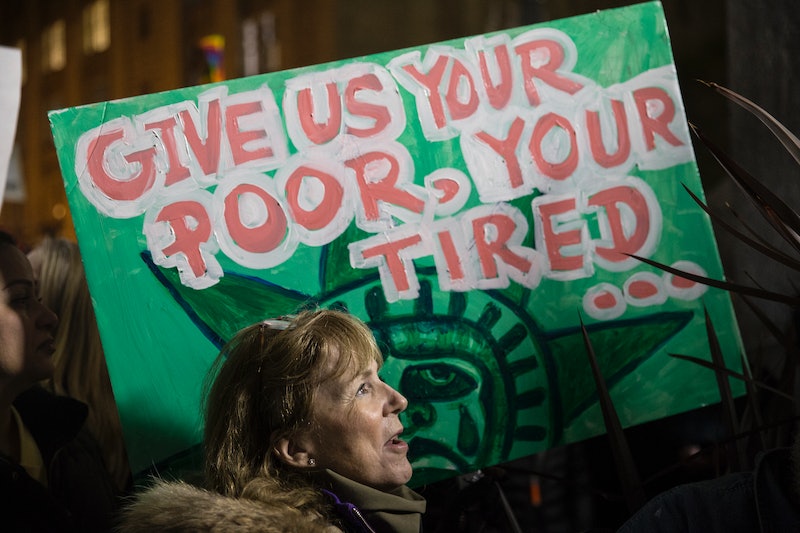 After watching Sen. Elizabeth Warren be silenced on the floor of the Senate, it can sometimes feel like women are having their voices taken away. However, it times of frustration, it's worth realizing that there are plenty of women in power who are making strong statements. Case in point look towards Michelle Friedland, one of the federal judges who will help determine the fate of President Donald Trump's controversial executive order on travel and refugees.

A little over a week ago, Trump signed an executive order on Jan. 27 that would target travelers from seven pre-determined, Muslim-majority countries: Iran, Iraq, Libya, Somalia, Sudan, Syria, and Yemen. It also included a provision that blocked refugees from Syria from entering the United States indefinitely. Last Friday, Judge James Robart, a federal judge for the Western District of Washington state, ordered a temporary halt to the enforcement of Trump's travel ban. Then, over the weekend, the Trump administration issued an emergency request to reverse Robart's stay. However, the U.S. Court of Appeals for the 9th Circuit denied the request — Friedland and her colleague, Judge William Canby Jr., were behind the decision.

Now, a three-judge panel comprised of Friedland, Canby, and Judge Richard Clifton is charged with deciding how to move forward and if Robart's decision will make it in the long run.

It won't be easy: Trump has been lashing out at anyone who doesn't agree with him, even taking shots at Robart (without explicitly naming him).

At just 44-years-old, Friedland is the youngest appeals court judge in the U.S. President Obama nominated her in 2013. Until then, she had been a partner at the firm Munger, Tolles & Olson in San Francisco. One of Friedland's first jobs was as a clerk for Supreme Court Justice Sandra Day O'Connor. When O'Connor announced her retirement, Friedland was quick to support her and sing her praises:

In the wake of Justice O’Connor’s retirement announcement, one commentator after another noted how her judicial decisions have shaped the law of the land over the past 25 years ... yet what I found most remarkable is that while she was contributing more to the devel­op­ment of the law than perhaps anyone in the past century, she also lived life to the fullest. To me, that is no coinci­dence. Her life exper­ience made her an effective and wise justice, not to mention a great boss.

Friedland would do her old boss proud. One of her best moments during Tuesday's hearing came when she asked August Flentje, the attorney representing the federal government:

I don’t think that you answered the question that was asked earlier about ‘what if the order said no Muslims?’ You’ve been analogizing to cases that were about people who were communists who advocated overthrow of the U.S. government. And are you saying that the external evidence here that is alleged that the intent here was to ban Muslims, is equivalent to that?

Friedland and her fellow judges may issue a decision as early as this week.