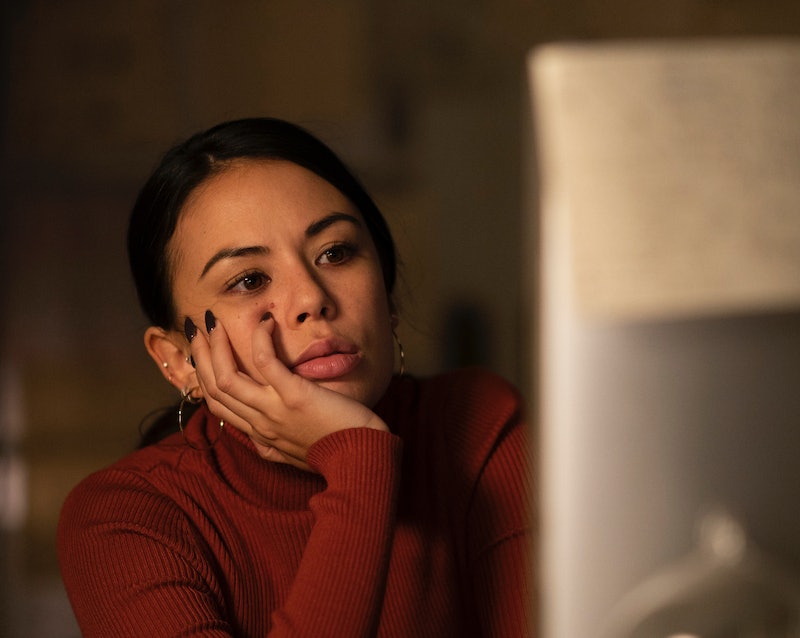 Guess who's up to her usual gaming tricks on PLL: The Perfectionists? Mona's playing chess with a mystery person, whose identity even she doesn't know. That can't possibly be a problem what with a murderer running around Beacon Heights, right? Mona could be playing with any number of people on campus, and, since she's in such awe of her opponent's talent, perhaps she'll eventually decide to track down her anonymous friend.

Some fans on Twitter are concerned that Mona's getting catfished, but if the opponent doesn't know Mona's identity either (it's an anonymous online chess club), what would that catfish payoff even be? Whoever is on the other side of the screen, though, Mona called them "the most brilliant opponent I could ever ask for," and she told Alison that they play together every night. The potentials for who it is are limitless, especially since Alison opened up the options by asking, "Who's the guy? Or girl?"

We know that Mona's getting a love interest on The Perfectionists, thanks to what Janel Parrish, who plays Mona, told Bustle. "You will start to see some fun romance things happen, too, with Mona. She’s still trying to figure out how to be romantic," the actor hinted. Perhaps her talented chess friend is that future beau?

Here are some theories about who her chess partner could be:

Taylor's holed up in a cabin in the woods, so she definitely has enough downtime to play chess every night. She's also smart enough to hack into the Beacon Guard security system, so she'd be a worthy opponent for Mona.

He's dating Caitlin in secret, maybe he's playing chess with Mona in secret too. He's a top scientist at Hotchkiss Industries, which means he definitely has the smarts to be a talented chess player. Plus, Parrish hinted to Entertainment Tonight, "I'm kind of down for a love triangle. I think that'd be fun." Maybe after playing chess all this time with Jeremy, she enters a love triangle with him and Caitlin?

There's no denying that the Hotchkiss matriarch is smart, she's basically running an empire. Also she hired Mona to be a game designer for Hotchkiss Industries, and Claire runs the campus security — so even if Mona is playing anonymously, Claire could know and be playing back on purpose to lower Mona's defenses or catfish her or something.

Who's a more worthy opponent for Mona than herself? Perhaps the online chess club is really just made for Mona and an algorithm matches Mona's moves with her own moves.

It'd be very A to return anonymously to mess with Mona.

Whoever Nolan's Killer Is

Online chess club anonymity is just what a killer would look for if they wanted some recreational time but didn't want anyone to know who they are/how smart they are. Is Mona's love interest going to be a murderer because... that might actually work out for her tbh.

Someone Else On Campus

Mona made sure to specify that she's playing in an online campus chess club. So that seems to limit the options to people who go to BHU or who live/work closely enough to use the wifi network. And pretty much every student is smart enough to be a secret chess fiend.

In any case, if and when Mona does find out, will she tell Ali? Mona's known for keeping secrets even from her friends, so don't expect the mystery chess player to be revealed to all any time soon. But fingers crossed whoever it is ends up being Mona's love interest, because fans cannot wait for that storyline to unfold.