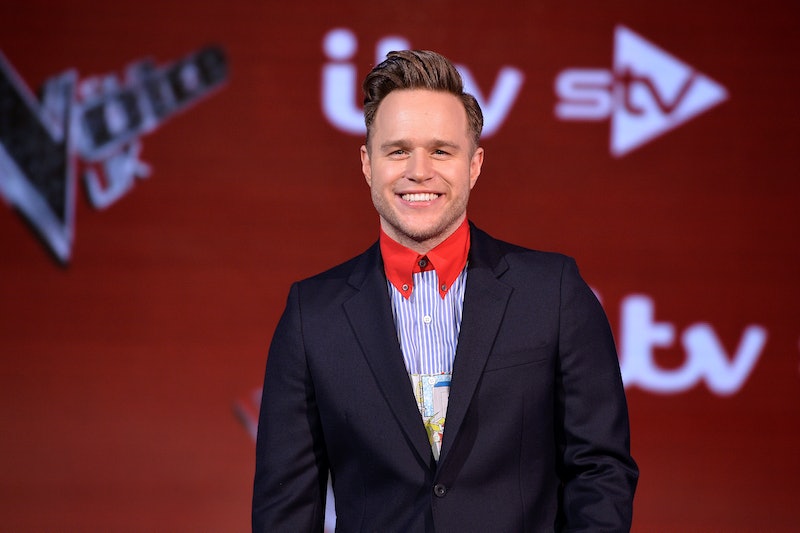 Ahead of the new series of The Voice UK beginning tonight, you may have been thinking about this year's judges, including everyone's favourite cheeky chappy, Olly Murs. So what's going on in Murs' life right now? For example, what has he been up to and who is Olly Murs dating? Well, it appears the singer is currently single. In September 2018, he appeared on the Jonathan Ross Show, where he told the host that "I am still single and having fun. That's it really." Bustle reached out to Murs' rep for confirmation about his current relationship status.

The singer also recently joked that perhaps he would find love on The Voice UK. "Spinning these chairs could be the only way I ever could find love," he told the Mirror in November. "It’s like speed dating. I only get to hear their voice so it would be love at first sight." Alas, he also told the paper he thought he would be "sacked" if he did, as he doesn't think he's "allowed to date contestants." Nevertheless, he did say that his romantic situation is regular fodder amongst his fellow judges. “We talk about my love life a lot,” Murs told the paper. “It’s ­become a bit of a running joke.”

The singer's last relationship lasted three years, with the pair parting ways in 2015, Heart reports. His ex-girlfriend was Francesca Thomas, a property manager who has reportedly since gone on to become engaged to another man — coincidentally named Ollie. The pair split in 2015, with Murs telling the Daily Mail Weekend that the pair had decided to go their separate ways because of career commitments. "You get to the point in a relationship where you have to decide what that next commitment stage is," he said. "We are both quite career-driven, so...”

He also explained that it had been hard for him since the split:

“It’s been difficult because we were together for three years, very together. Being with her was like being in a bubble — where I’d go to get away from the madness of my world. It was a more normal world. But when that bubble bursts it bursts.”

Sadly, Murs later told heat that he felt the break up was a "big mistake."

"I think I broke my own heart by letting my ex-girlfriend go. But that's my own fault. That's probably the last time my heart was broken. It was one of those ones where you break up with someone and you don't really realise for about a year after that, actually, you've made a big mistake."

There had since been rumours that Murs was dating his then X Factor co-star Caroline Flack, as the Express reported. "We're not girlfriend and boyfriend, yet we're not totally platonic either," Flack told You magazine in 2015. While viewers never saw the romance progress to the next level, there was a lot of Instagram love and the two seemed very cute together.

Murs was also linked to Melanie Sykes, as The Sun reports, and he all but confirmed the rumours during his Loose Women interview. "Mel's amazing... there might have been something," he told the hosts.

Murs is taking to our screens in the first episode of the new series of The Voice UK on Saturday 5 January at 8 p.m. He is reprising his role as one of the four judges, alongside Tom Jones, will.i.am, and Jennifer Hudson. Emma Willis will be presenting the show. The series is set to be a little different from any previous ones, as trios are now allowed to audition as well as individuals and pairs. Sounds like it'll be a good one.