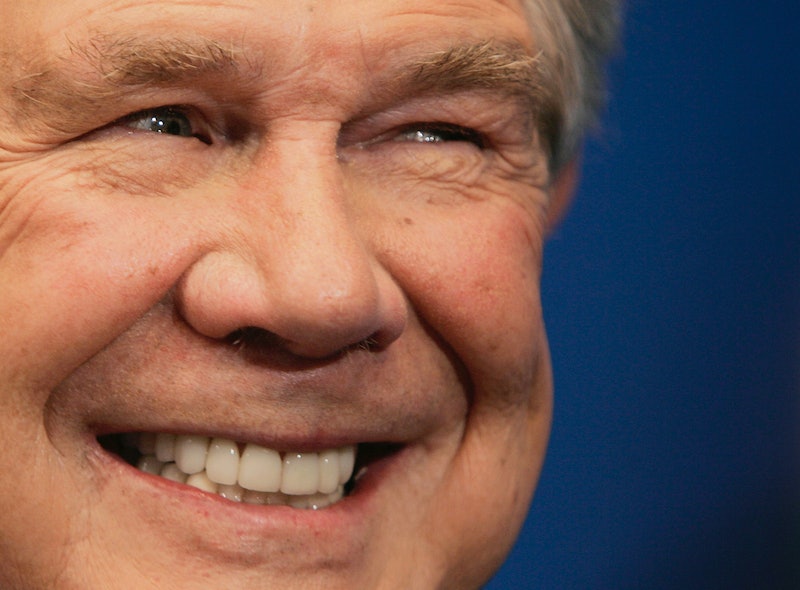 After the horrific attack in Las Vegas late Sunday night, certain people used their national platform to spread some poorly reasoned ideas about it. One of those individuals is Televangelist Pat Robertson, who blamed the Las Vegas attack on Americans' supposed "disrespect" for authority. As the nation mourns the loss of over 50 innocent people, the connection is neither appropriate nor sensical.

In his response, he blamed NFL players who kneel instead of stand up for the National Anthem, as well as people who have "disrespect" for Donald Trump and say "terrible things about him."

It's unfortunate that citizens' decision to question government institutions — a right that defines American democracy — is labelled as "disrespect" by a figure who is trusted to be moral.

Then again, Robertson didn't disagree that pagans, abortion advocates, the LGBTQ community, and feminists are partially to blame for the horrors of the Sept. 11 terrorist attacks. On Sept. 13, televangelist Jerry Falwell spoke on his radio show and wasn't shy about condemning people who go against his personal, subjective beliefs.

The abortionists have got to bear some burden for this because God will not be mocked. And when we destroy 40 million little innocent babies, we make God mad. I really believe that the pagans, and the abortionists, and the feminists, and the gays and the lesbians who are actively trying to make that an alternative lifestyle, the ACLU, People For the American Way – all of them who have tried to secularize America – I point the finger in their face and say “you helped this happen.”

Robertson responded, "Well, I totally concur." The 87-year-old wasn't the only one who had a troubling explanation — albeit unsurprisingly — for the Las Vegas attack on Monday. Former Fox News anchor Bill O'Reilly had the nation fuming after he wrote on his blog that the shooting was the "price of freedom."

Public safety demands logical gun laws but the issue is so polarizing and emotional that little will be accomplished as there is no common ground. The NRA and its supporters want easy access to weapons, while the left wants them banned. This is the price of freedom. Violent nuts are allowed to roam free until they do damage, no matter how threatening they are.

If you don't read his entire post, this almost sounds like a perverted defense of stricter gun laws. But it's not. "But having covered scores of gun-related crimes over the years, I can tell you that government restrictions will not stop psychopaths from harming people," O'Reilly wrote. "They will find a way."

And perhaps worst of all, others were quick to craft conspiracy theories about the horrific incident just hours after it occurred. For example, a particular InfoWars story claims there was a second shooter and that police reports thus far are false. In fact, the site's founder, Alex Jones, has even begun speculating on the shooter's motive, even though a motive has not been confirmed.

Nothing can be solved by placing the blame on a particular group of people or a certain "side." And the Las Vegas attack is no exception. These misleading claims are certainly not revelations, no matter how much Robertson, O'Reilly, or Jones may suggest they are. They're both ignorant and disrespectful to those being affected by the aftermath of the attack.