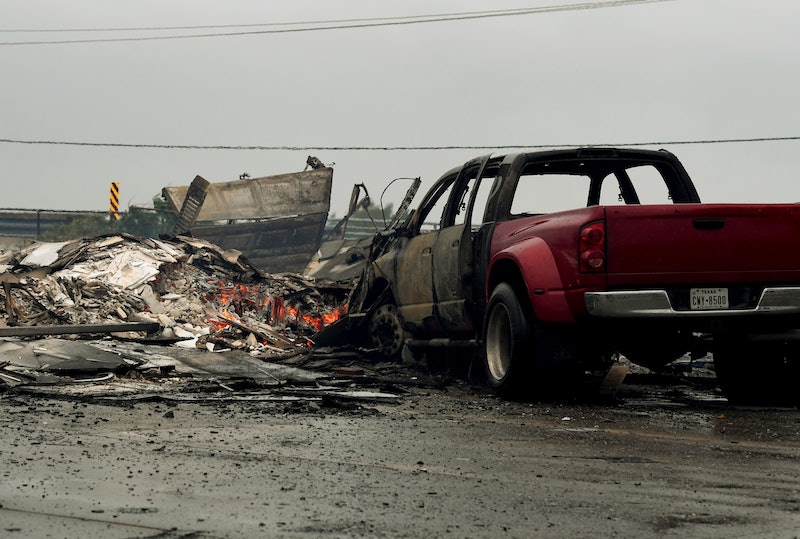 As the powerful winds of Hurricane Harvey hit Texas, public officials issued statements bracing for the tremendous storm, which is predicted to cause significant damage to the coastal parts of the state. But in one particular instance reported by ABC News, the mayor of Rockport, Texas, told residents to write their Social Security numbers on their arms if they are not evacuating.

"We’re suggesting if people are going to stay here, mark their arm with a Sharpie pen with their name and Social Security number," Mayor Pro Tem Patrick Rios said. It may have stunned some with his statement, but spoke to how serious the damage from Hurricane Harvey was expected to be. He added, "We hate to talk about things like that. It's not something we like to do, but it’s the reality, people don’t listen."

Rockport is one of the areas hit by Hurricane Harvey where a public notice for voluntary evacuation was already issued but from the looks of Rios' statement, it seemed as if some were reluctant to leave their residences in the face of a storm that was described as "deadly" by the chief of the Federal Emergency Management Agency (FEMA), Brock Long.

Rios' statements about the potential danger of the Hurricane Harvey hitting Rockport were later on corroborated by official reports of intense torrential rain and winds in the small city situated on the Texas Gulf Coast.

Chief of Rockport Volunteer Fire Department, Steve Sims, informed ABC News that his team of rescue operators were taking shelter in the local fire station while they received around 30 calls. Sims said that the team was unable to help at the time due to the severity of the storm but that the firehouse stood strong in the face of the storm. "It rattled, it shook, but made it through it," Sims said.

As Saturday morning began, the extent of the chaos brought on by Hurricane Harvey became evident. The roofs of houses and buildings had been torn off or collapsed while building signs were washed away and storefronts were destroyed. Power outages took place as well due to power lines and trees falling down in residential areas. With signs washed away, crumbling bricks, and shattered storefronts, the debris on the roads made it impossible for locals to navigate.

In such a situation where the intensity of a storm poses a grim and undeniable threat to human life, Rios' statement may seem shocking to some but it appeared to be imperative to be heard — and heeded — by those who still chose to remain in the area.