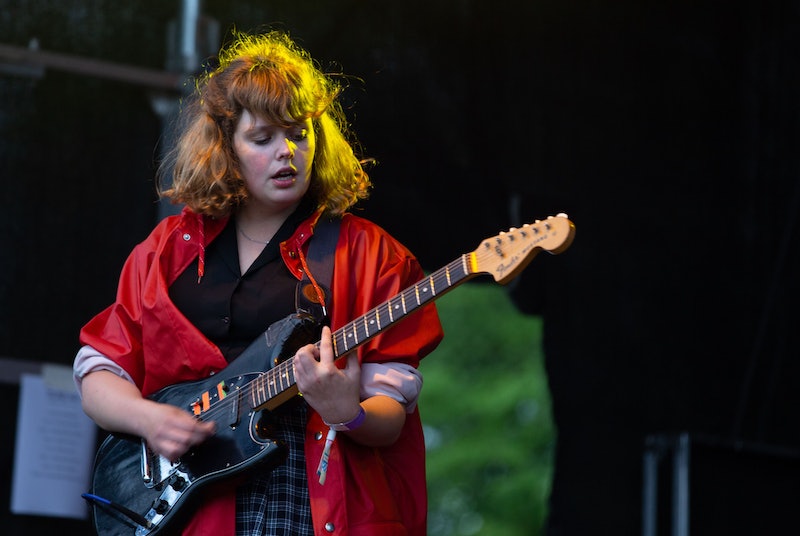 It's almost Glastonbury weekend, and to get you in the mood — in the most British way possible — it's absolutely chucking it down. So, while you're listening to your Glastonbury playlist, alongside the sound of the rain coming down, there's some musicians that I really encourage you to add to it, to help prepare you to get the most out of Glastonbury Festival. That includes this lady. But who is Pip Blom? Well, confusingly, it's a person and a band name. Both are making bigger and bigger waves, and the band's set at Glasto is bound to be one of the weekend's highlights. Here's why you should get to the artist a bit before heading into the tent yourself.

Following the release of their debut album Boat on Friday, May 31, the Dutch quartet who make up Pip Blom have been getting quite a lot of attention. BBC6 Music made it their album of the day following its release, and Pip Blom (yes, that's her real name) recently made an appearance on Amy Lame's show which you can listen back to here.

Still only in her early twenties, Blom creates meticulously clever indie-pop tunes, which feature many a twist and turn, but they're still filled to the brim with hooks, meaning that they're likely to stay in your head for days to come.

You'll be singing their tunes all the way to the John Peel stage at Glastonbury, as they'll be opening up that tent for the weekend, as they play the iconic stage at 11:30 a.m., according to the Evening Standard's set times. So you better bring your morning breakfast butties along with you. According to the NME, Pip's brother Tender Blom (can you believe the adorable names in this family) joins her in her band, and they come with the late, great John Peel's blessing.

Pip and Tender's dad Erwin Bloom, was in a post-punk band called Eton Crop. As one of music's most legendary tastemakers, Peel plugged Blom's band several times on his radio show, according to the DJ's fandom page. He even once allegedly referred to them as his "favourite Dutch band." I wonder if he'd say the same of Erwin's successors.

It seems those that have heard of Pip Blom are shouting about them. With this attention grabbing opening set at Glasto, and all the incredible reviews their debut album has been getting, including a nine out of ten from The Line Of Best Fit, the band have already amassed a following that they'd never even dreamed of. Pip had reportedly only intended for a few people to hear her music when she uploaded some early songs onto the internet in 2016.

However, they soon totted up thousands upon thousands of plays, which has led Pip Blom to where they are today — heralded as one of the most exciting news bands, with a future that looks very rosy indeed. So, make sure to start your Glasto off the right way, by checking out a very special band in the infancy of their career. You might regret missing it when they really blow up down the line.