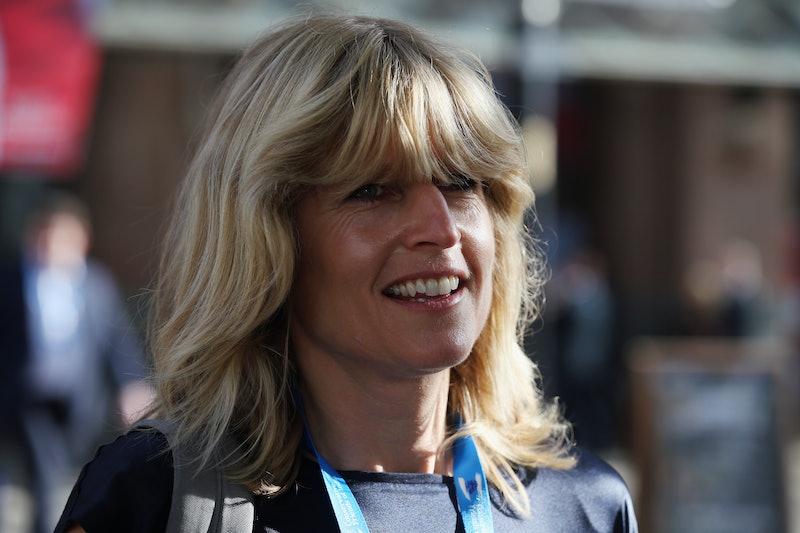 Luckily, Comic Relief week makes celebrity do all sorts of bizarre things, including trying to impress Sir Alan Sugar. That's right, another round of Comic Relief Does The Apprentice is about to roll around. In the past, the boardroom has welcomed the likes of Piers Morgan, Cheryl Cole, and Jonathan Ross, but now it's time for a new team of celebs to compete to win the most money in a gruelling business task. Among them is someone you might faintly recognise, but can't quite place. So who is Rachel Johnson? She's bound to cause up a stir in the boardroom, and I can't wait to see it.

You might recognise that surname and floppy blonde hair from somewhere else. It might not have taken you too long to clock that she is in fact sister to MP and former Mayor of London Boris Johnson. Though don't be fooled: she's achieved a ton in her own right, once telling the Guardian, "The 'Boris's sister' thing pisses me off." And before you ask, she's an ardent Remainer. How do we know? Well I'm specifically thinking of that time she took off her top to introduce a bulletin on Sky News back in February. She was reportedly inspired to do that by a Cambridge professor, Dr Victoria Batemen, who went on a nude protest against Brexit.

As Bateman explained to Cambridge Live:

"When we remove our clothes there is a sense in which we realise that we are all human beings and so actually, perhaps if Brexiteers were to strip off they might wake up to that basic humanity."

While Johnson invoked the protest to also draw attention to Brexit, she didn't exactly follow suit. As she attested in a self-penned article for i News, she claimed that she wasn't totally topless. "I had a boob tube on," she wrote.

In her everyday job, Johnson is a longtime journalist and author. A graduate of Oxford University, she then went on to the Financial Times, where she became the first ever female graduate trainee. She's since worked for the BBC, the Telegraph, the Evening Standard, the Sunday Times, and the Mail on Sunday.

She's also written a couple of books, with her second novel, Shire Hell, winning the 2008 Bad Sex in Fiction prize for an impressively unnerving descriptions. She describes a man's tongue as "a cat lapping up a dish of cream so as not to miss a single drop," for a starter. Shudder.

Beyond bad sex and (not) going topless, what else can you expect from Johnson? Well, probably some fierce opinions, I imagine. She's not one to be controversy free, as she recently learned when she tweeted about the Irish abortion referendum and Twitter took her to task, as the Irish Times reports. She also previously went on Celebrity Big Brother, which the Daily Mail reports that she describes as being like a prison, and where she later admitted her "aversion to small talk, and [her] fierce addictions to sleep and tennis and Twitter" made it all rather difficult.

While I'm not a huge fan of some of Johnson's opinions, it will sure be entertaining to see Sugar deliver the "you're fired" clanger to some of the celebs in question.