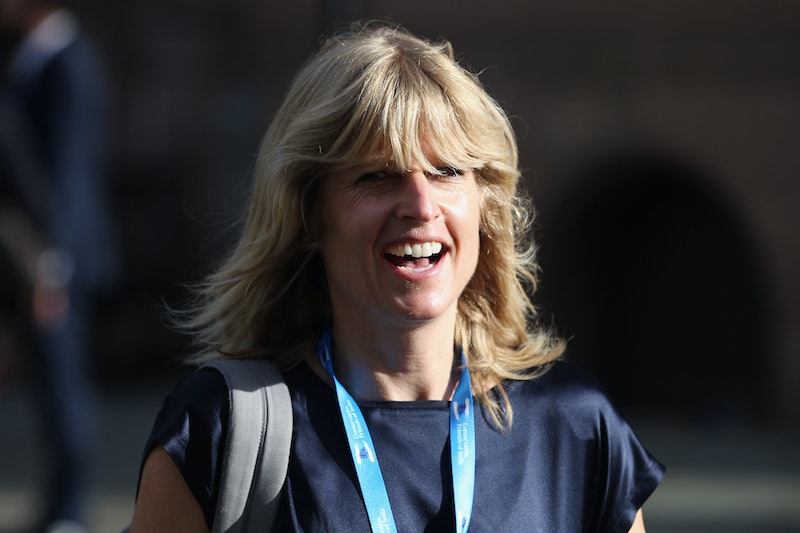 Well it's lids off over on Sky News and I don't mean jam jars. Nope, to add to the pantomime that is Brexit, people have begun to use alternative methods to get their points across. In this particular instance, Rachel Johnson took her top off on Sky News, and TBH, you go girl.

Johnson was appearing on Sky News for a discussion about, you guessed it, Brexit. I mean, do they talk about anything else on the news RN? During the conversation, she said she feels people's points are no longer getting across. This is due to the population's ears literally being bored off by the seemingly endless business of deal or no deal which is so dry it could almost make you pine for Noel Edmond's gameshow of the same name. Almost.

"As I know, it can be hard to get your voice heard when talking about Brexit nowadays. It feels like we have hit saturation point. Enter pro-EU campaigner Dr Victoria Batemen who’s come up with a striking way this week to get herself noticed," Johnson said.

Who's Bateman, I hear you ask? Well she is an economist and staunch Remainer who has appeared on both Good Morning Britain and Radio 4 naked with "Brexit leaves Britain naked" inked across her chest. She has done so to make the point that she feels Brexit will leave the country exposed and naked economically.

Keen to get her own views across, Johnson chose to emulate Batemen's recent actions. She continued, "[Bateman has been] appearing across the media completely starkers to make various points about Brexit leaving Britain naked. So in tribute to Dr. Bateman I’ve decided to follow suit — every time we decide to talk about Brexit just to make sure I get noticed around this table."

This was much to the surprise of the other guests on the show, including June Sarpong who showed her support. But shortly after Johnson said "I'll get dressed. I'll put them away."

After the show, Johnson took to Twitter to admit that despite her breasts being blurred, she was in fact wearing a flesh coloured boob tube.

So yes, she was inspired by and supporting Batemen, but didn't go the whole hog. Saving herself, one will assume from the disgusting amount of backlash the economist faced after her naked protest.

And y'all, the backlash was not just from misogynists. Nope, it was sadly from a lot of other women as well. One Twitter user even claimed she had set feminism back 100 years. I'm not sure if that particular person knows that shaming women and their bodies is pretty damn anti-feminist.

Women engaging in naked protests isn't a new thing. One pretty famous example is Pussy Riot and the group's supporters, who often use their bodies in order to raise awareness of their political views. Women taking back ownership of their bodies and using them as they please strikes to the very core of male fragility and takes away patriarchal control. The patriarchy views naked women as very much for its enjoyment. As the old chant goes, "get your t*ts out for the lads". God forbid you would get them out for yourself or for your own political agenda.

Women exposing their bodies is one of the most raw protests around, so why not get naked for Brexit? Especially as, if the recent coverage is anything to go by, it's seen by the British public as more controversial than any number of effed up things done by our male counterparts. Take for example sexual harassment, fiddling expenses, and well Brexit itself.