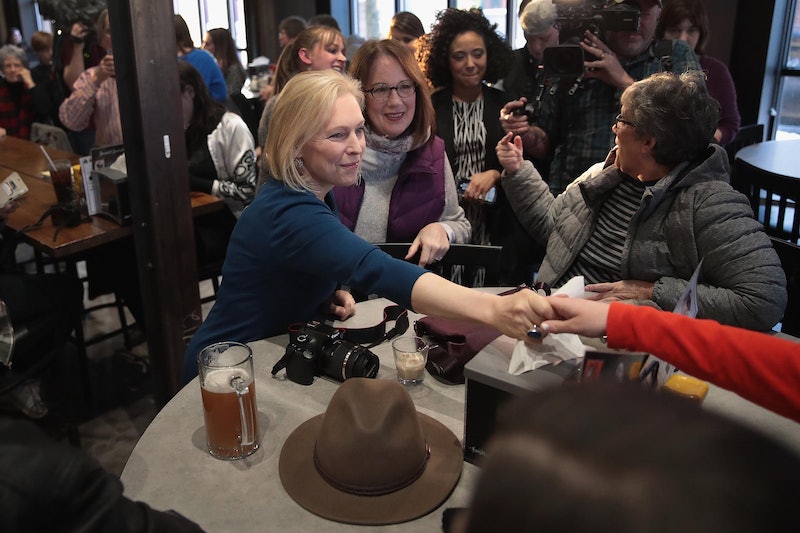 Some are born great, some achieve greatness, and some have greatness thrust upon them while they’re just trying to get to the ranch dressing. The latter is the case for the icon/hero/college student who will live in infamy as the woman who interrupted Kirsten Gillibrand because she wanted ranch. This the hero’s journey — much like the creamy, garlic-y, buttermilk dressing — that we want, we crave, we deserve.

To get to the cool salve that is Ranch Girl, we must start with the sting of the already-burning 2020 presidential election. New York Senator Kirsten Gillibrand announced her candidacy earlier this year, making her one of the 300 other Democrats who have announced that they’re running. (As of today, there are apparently only 12 people who have announced their 2020 presidential campaign, which feels like some sort of Mandela effect. I could swear it was at least 2,000.) Gillibrand’s Iowa City campaign stop included Airliner, a bar which serves typical bar food like pizza and wings and *foreshadowing* ranch.

Because there were so many people in attendance, Gillibrand headed to the bar and perched atop a booth like a Cool Teacher to talk to the overflow crowd. When asked about her support of the Green New Deal, Gillibrand responded, “I don’t think we should back away from the bold idea that the base and the grassroots care about.” As she’s responding, a young woman approaches. Gillibrand reaches down, likely assuming the woman is coming up to ask a question. Gillibrand touches her shoulder. The woman raises her arms up and declares, “Sorry, I’m just trying to get some ranch dressing.” And with that, the internet found an icon.

The Midwesternness of it all speaks to my very soul. Ranch Girl is clearly trying to go about her Ranch Endeavors in the most polite, least intrusive way possible. You can practically hear the “ope just gonna sneak by ya real quick” in her voice. The fact that it has become A Moment™, as well as a literal Twitter Moment, is such sweet and tangy irony.

The Cut’s Madison Malone Kircher found and spoke with Ranch Girl whose real life name is Hanna Kinney. She’s a 22-year-old college student studying, as Kinney put it, as “The University of Iowa in Iowa City, Iowa. Basically just 'Iowa' a whole bunch of times.” Someone give this woman a trophy dipped in ranch!!! When asked about the ranch, Kinney said:

Like I said on Twitter, their ranch is amazing. I love it and sometimes they bring it up to us and sometimes they don’t. It’s one of those restaurants that make it homemade, which is very common in Iowa, to be honest. I was going down there to grab it — it’s not just me, a few of my other friends in Bible study enjoy the ranch — because it’s sort of my job in the group. My friends have been joking like, “Yes, Hanna was finally recognized for the deed she has always done for our people.” The funny thing is I was just trying to get to the back quietly and a lot of articles have said “person snubs political candidate” and I honestly wasn’t trying to snub her. I was pushing through people in the nicest way possible. ’Cause you know, “Iowa nice.”

She was giving the people what they want and what the people want is ranch! (Hidden Valley, your silence in all of this is deafening.)

The internet loves Ranch Girl. Comedians love Ranch Girl. Ranch Girl is for the people. Writer R. Eric Thomas dubbed Kinney’s viral aesthetic the “Just Trying to Get Some Ranch energy” and Twitter collectively nodded in agreement. In this climate, we are all just trying to get some ranch.

And fear not, my french fry dipping friends: she did get her ranch. Kinney told The Cut, “People were literally yelling ‘yes, queen’ and ‘she got her ranch!’ I was just like, ‘Thank you, I’m going to go back upstairs now.’ ”

No, thank you, Ranch Girl.